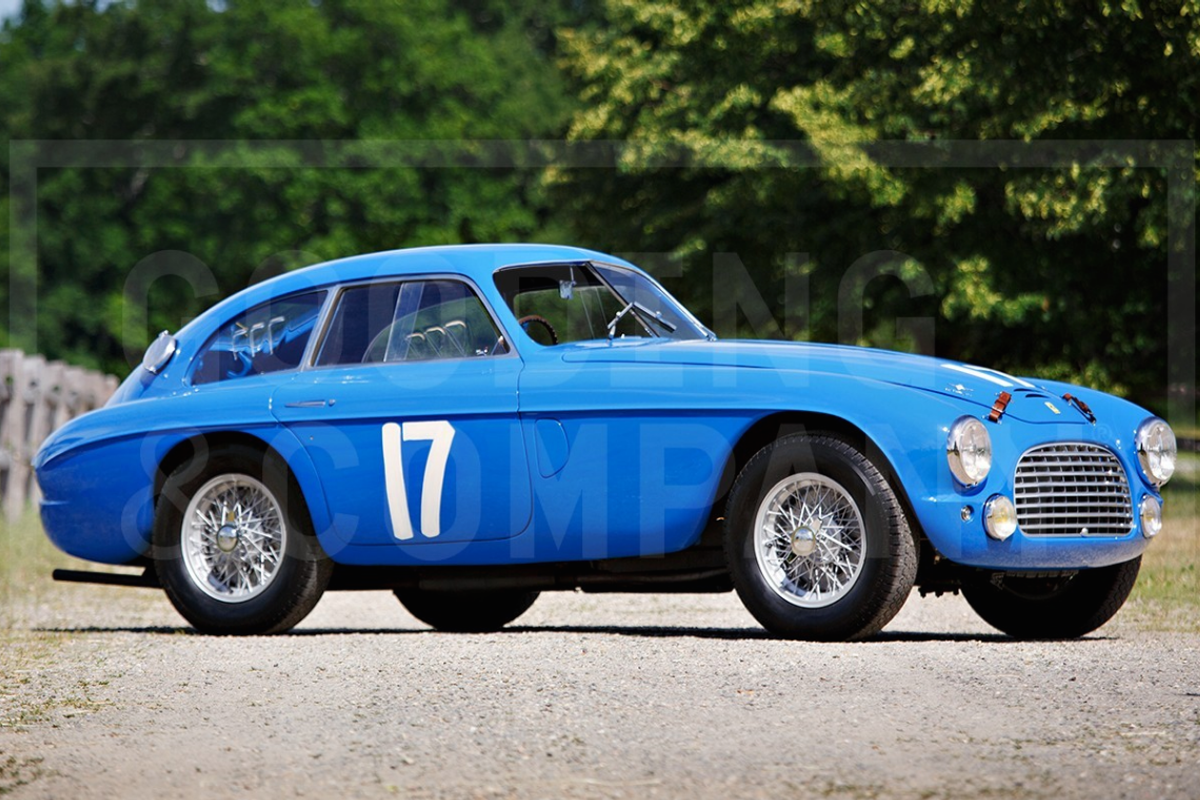 THIS CAR
It was the Tipo 166, introduced in 1948 as a replacement for the 125 S, that first established Enzo Ferrari’s Modenese workshop as a leading manufacturer of racing cars. Powered by a two-liter Colombo-designed V-12 engine, the 166 set forward a course of development that would define the look, sound, and inimitable character of Ferrari automobiles.

While the earliest 166 Sports and Spider Corsas were successful in their own right, it was the 166 Mille Miglia – or MM – that dominated sports car racing in the late 1940s and early 1950s. In fact, the Ferrari 166 MM is the only car to win all three of the great European sports car races – the 24 Hours of Le Mans, the Targa Florio, and the Mille Miglia.

During these early days, Carrozzeria Touring, based in Milan and headed by Carlo Felice Bianchi Anderloni, was the coachbuilder most closely associated with the Ferrari marque. Touring’s exquisite designs and technically advanced Superleggera construction were ideally suited to the sporting qualities of the 166 MM chassis. The now-iconic 166 MM Barchetta, or “Little Boat,” was the happy result of this collaboration between Ferrari and Touring, leading to the development of a purpose-built competition car – the 166 MM Berlinetta Le Mans.

Unveiled at Geneva in 1950, the Berlinetta Le Mans was a striking fastback with origins in the magnificent streamlined Alfa Romeo racing cars of the late 1930s. Sculpted from lightweight aluminum, the beautiful 166 MM Berlinetta Le Mans was, in essence, a more aerodynamically effective Barchetta. Designed specifically for high-speed endurance racing, the Le Mans Berlinettas featured a spartan, business-like cockpit and were purposefully equipped with leather tie-down straps, large external fuel fillers, and Plexiglas windows. In their concept and execution, these early 166 MM competition cars were the foundation for Ferrari’s successful line of dualpurpose berlinettas.

The Ferrari presented here, chassis 0060 M, is the fifth of just six 166 MM chassis originally fashioned with Touring’s Berlinetta Le Mans coachwork. Each Touring Berlinetta was unique in its individual details, and this example, carrying body number 3461, was originally finished in a striking light blue livery. The coachwork fitted to 0060 M can be distinguished by two horizontal air intakes on the hood, louvers in the rear quarter windows, faired-in fog lamps, and one-off gauge layout, with beautiful white-faced Jaeger instruments placed in the center of the dashboard.

Constructed during May and June 1950, 0060 M made its racing debut at the IV Coppa d’Oro delle Dolomiti, held on July 16. Still under factory ownership, the Berlinetta Le Mans was entrusted to Franco Cornacchia, who achieved an impressive 3rd Place in the new Ferrari. Less than a month later, the 166 MM was entered in the Giro della Calabria, where Dorino Serafini and Ettore Salani drove it to an outright victory.

In an effort to find a buyer for the new Ferrari, Luigi Chinetti, the three-time Le Mans winner and official North American importer, displayed 0060 M at the prestigious Paris Auto Show, held between October 5 and 12, 1950. Placed in the center of the show stand, flanked by a 166 MM Barchetta and a 166 Inter Cabriolet by Stabilimenti Farina, the blue Berlinetta Le Mans attracted considerable attention.

Cunningham, who had been impressed by the performance of two similar berlinettas at the 24 Hours of Le Mans earlier that year, planned to race the Ferrari in the US during the upcoming season. To ensure that his car would be at the front of the pack, Cunningham had Ferrari upgrade 0060 M to full 195 S specifications, as reflected by handwritten notes on the factory build sheets.

Developed by Ferrari engineers in 1950 to keep pace with new large displacement sports cars, a 195 S was a 166 MM with an increased 5 mm bore, bringing total displacement to 2.3 liters. When equipped with three Weber carburetors and topped by a cold-air box, the 195 S specification engine produced approximately 170 bhp at 7,000 rpm – representing a significant gain in performance. Not only was the 195 S more powerful than the standard 166 MM, it was more forgiving as well, producing greater torque at lower engine speeds for increased driveability.

Cunningham’s 166 MM/195 S Berlinetta Le Mans arrived in New York harbor in December 1950, giving it the important distinction of being the first closed Ferrari competition car delivered to the US. Soon after its arrival, the Ferrari was registered in Connecticut and driven to Florida, where it was to take part in the Sam Collier Memorial Sebring Grand Prix of Endurance Six Hours held on December 30, 1950.

The event program for this first race at the Sebring municipal airport lists Briggs Cunningham as the entrant for three cars – an Aston Martin DB2, a Nash Healey, and 0060 M. With his successful record in endurance racing, Luigi Chinetti was entrusted with Cunningham’s 2.3-liter Ferrari and gave a brilliant performance behind the wheel, finishing 7th Overall and 1st in Class, with an average speed of 60.7 mph.

After Sebring, the Cunningham Ferrari was invited to take part in a sports car race in Buenos Aires, organized by Argentina’s president, General Juan Perón. In this highly publicized event, Jim Kimberly drove the Ferrari to a creditable 7th Place finish.

From there, 0060 M returned to the US, where it took part in two of the most popular sports car races – Bridgehampton and Watkins Glen.

A name well known among sports car aficionados, Mr. Manney was a beloved automotive journalist who would one day succeed Bernard Cahier as Road & Track magazine’s European editor and race reporter. When he acquired 0060 M in 1952, Mr. Manney was just 30 years old, and he proudly entered the Ferrari in the Oakland International Sports Car Show in California, receiving First Place in the class for “cars over $6,000.”

Later that year, Mr. Manney traded the Ferrari to John Fox, the American agent for Cooper Cars, receiving a new Aston Martin DB2 and a Cooper- Norton in return. Mr. Fox then entered 0060 M in its last race, the San Diego Cup at Torrey Pines. Following Mr. Fox’s ownership, the Berlinetta Le Mans passed between owners in Southern California until 1965, when it was sold to Lawrence A. Knaack of Long Grove, Illinois.

In 1998, the Touring Berlinetta returned to the US and was soon acquired by Ferrari collector Bruce Lustman of Colorado. Eager to return 0060 M to its original splendor, Mr. Lustman commissioned Mike Dopudja of MPH in Englewood, Colorado, to perform a complete, show-quality restoration. Restored over a two-year period, the Ferrari made an impressive debut at the Pebble Beach Concours d’Elegance® in August 2001, where it captured a Second in Class award.

Over the past decade, the Ferrari has been a fixture in two prominent US collections and has made very few public outings. Faithfully presented today in its original Sebring livery, 0060 M is an absolute jewel of a sports car. The important stamped components – chassis, engine, gearbox, and rear end – all correspond to the factory build sheets. Most recently, it has been serviced and cared for by Paul Russell and Company, a firm internationally renowned for its accurate, high-quality restoration work.

Well known and highly regarded among marque experts, this is a historically significant even-serial-number Ferrari that possesses every quality one looks for in a collectible automobile: aesthetic beauty, mechanical sophistication, exclusivity in numbers, a fantastic racing history, and exceptional provenance. With the vast majority of 166 MMs held in major collections, the appearance of 0060 M at auction may be a once-in-a-lifetime opportunity to acquire a stellar example of Ferrari’s first great competition Berlinetta.