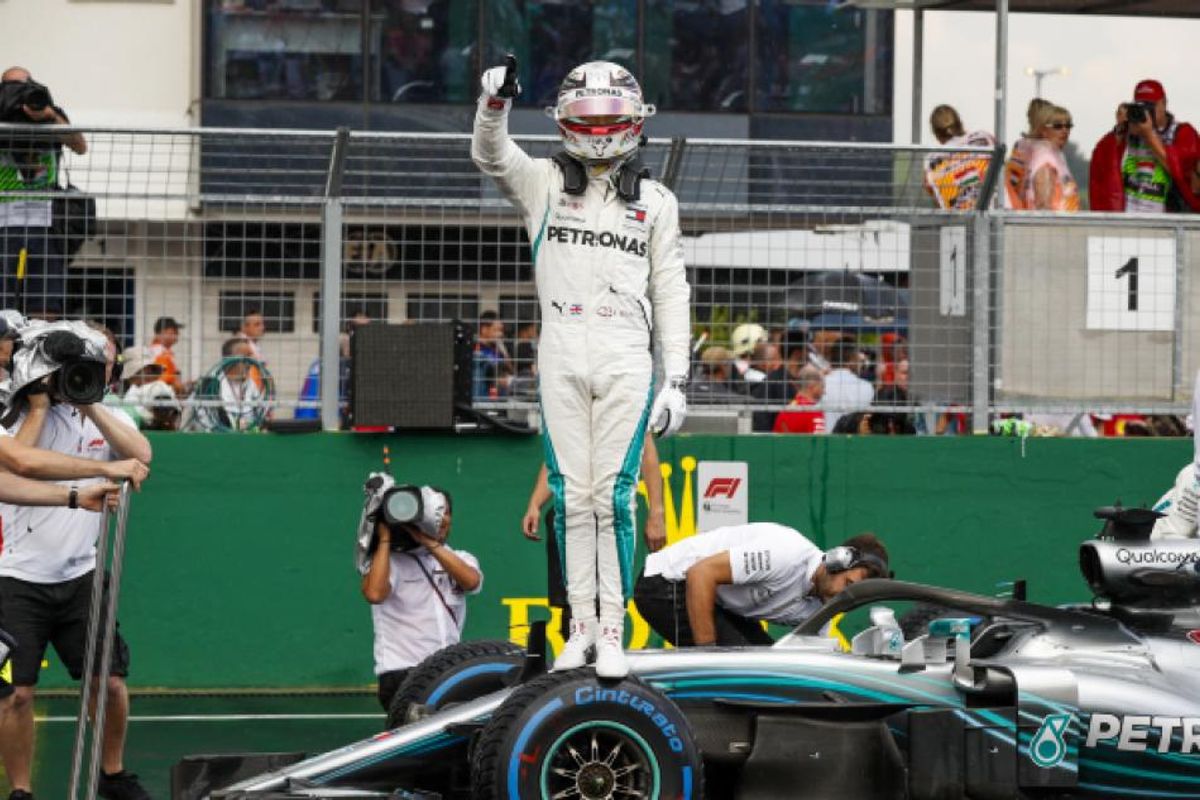 Lewis Hamilton put in a superb lap in difficult wet conditions at the Hungaroring to claim his 77th career pole position and his fifth of the season ahead of Mercedes’ team-mate and the Ferraris of Kimi Räikkonen and Sebastian Vettel.

A hugely unpredictable qualifying session began on a wet track due to earlier rain, and though there was no rain falling at the start of the session all driver started the session on intermediate tyres. That meant that the expected order was maintained as Kimi Räikkönen led the way ahead of Sebastian Vettel and Lewis Hamilton.

However, as the rain held off, drivers began to move to slicks and when Carlos Sainz eclipsed the intermediate tyre times by more than two seconds the leading drivers also took on ultrasoft Pirelli tyres.

One of those who opted for a different strategy was Red Bull Racing’s Daniel Ricciardo. The Australian took to the circuit on soft tyres and as the clock counted down he see-sawed up and down the order, slipping into the drop zone in the final minutes of the session. He kept grinding out laps, however, and eventually climbed to P12 at the end of the session to make it through to Q2.

There was no such luck for McLaren’s Stoffel Vandoorne, though, as improvements elsewhere pushed him to P16 and out of the session ahead of Sauber’s Charles Leclerc, the Force Indias of Esteban Ocon and Sergio Perez and Williams’ Sergey Sirtokin. At the top of the order Sebastian Vettel took P1 ahead of Red Bull’s Max Verstappen, with Bottas third ahead of Hamilton and Räikkönen.

Ricciardo was soon in trouble in Q2 as well. The Australian, along with McLaren’s Fernando Alonso, took to the track later than their rivals in Q2 and by the time they were into their runs on intermediates the rain was intensifying quickly.

Ricciardo’s opening time left him mired in the drop zone and as the rain became heavier and the intermediate tyres ceased to cope with the conditions, there was no way out of trouble.

Ricciardo and Alonso both continued to circle on full wet tyres but neither improved significantly and the Spaniard was eliminated in P11, while Ricciardo exited the session in P12. Behind them Renault’s Nico Hulkenberg also exited, in P13, with his team attributing his late entry to the session to a problem with the fuel bowser. Sauber’s Marcus Ericsson went out in P14, and the last man eliminated in Q2 was Williams’ Lance Stroll.

At the top of the order in the unpredictable conditions Vettel was quickest ahead of Renault’s Carlos Sainz and Verstappen, with Hamilton fourth. Toro Rosso’s Pierre Gasly was fifth ahead of Bottas, with the second Toro Rosso of Brendon Hartley seventh ahead of Räikkönen and the Haas cars of Kevin Magnussen and Romain Grosjean.

The rain began to back off in Q3 and for the top 10 qualifiers it was a case of playing a waiting game as the track improved. And it was Lewis Hamilton who got his timing just right.

Kimi Räikkönen had established himself in provisional pole with a good lap of 1:36.186 early on. In the final runs it looked like he might hold onto it as team-mate Sebastian Vettel found an improvement, but not enough to rise above the Finn. Mercedes, though, had other ideas and Valtteri Bottas moved ahead with a time of 1:35.918. Hamilton though was just behind and the got the best out of the Mercedes in the conditions to post a time of 1:35.658 to take his 77th pole position.

Behind fourth-placed Vettel, Sainz qualified fifth, with Gasly in an excellent sixth for Toro Rosso. Verstappen could find no improvement in the final runs and so he qualified in seventh place ahead of the second Toro Rosso of Hartley. Haas drivers Kevin Magnussen and Romain Grosjean qualified in ninth and 10th places respectively.