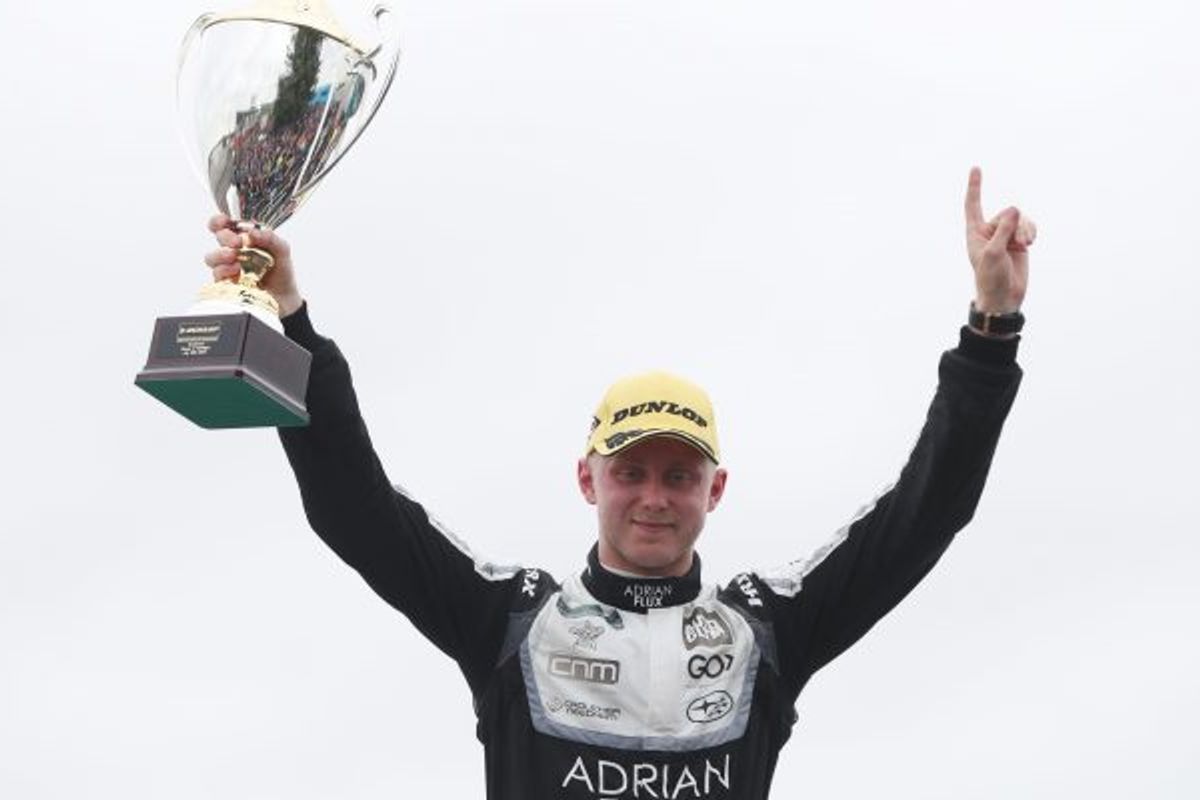 Reigning BTCC champion Ash Sutton won the second race at Snetterton after fending off a late challenge from Josh Cook on the run down to the finish line.

Adrian Flux Subaru Racing’s Sutton was seemingly in complete control of the contest, particularly so after pole-sitter Jack Goff was forced to start from the pitlane when his team failed to release his vehicle in the allotted time prior to lights-out.

The #1 Subaru Levorg – sporting a retro black and white livery on this special celebratory BTCC weekend – stormed off into the distance and looked set to cruise home for a third win of the season. A late safety car period, however, threw the result into doubt and allowed the extremely fast Power Maxed TAG Racing Vauxhall of Cook to have one final go at claiming the win from Sutton.

Cook disposed of Dan Cammish’s Halfords Yuasa Racing Honda on the penultimate lap to move into second and was immediately onto the rear of the lead car. In a similar tussle down the final straight to the earlier duel between Sutton and Goff, it was Sutton this time who held on to take the victory and fire himself into championship contention.

Tom Ingram produced one of the drives of the season to surge from 27th on the grid to claim the unlikeliest of podiums, with his Speedworks Motorsport Toyota Avensis completely hooked up in the drying conditions. Ingram made amazing pass-after-pass with his final two moves bringing his team to their feet in a tense finale. He sliced inside Chris Smiley’s BTC Norlin car with just over a lap remaining and then hauled his car alongside Cammish’s Honda on the run to the line. When the chequered flag fell it was Ingram celebrating – taking the rostrum by just 0.042s.

Cammish was the unlucky man to finish fourth, whilst Smiley kept fifth ahead of Sam Tordoff’s Ford and Senna Proctor’s Vauxhall.

Tom Oliphant is arguably enjoying his best day in his short BTCC career so far with eighth proving yet more reward for the Ciceley Motorsport driver. He made a number of eye-catching moves in this one and his pass by Andrew Jordan’s BMW Pirtek Racing car was enough to secure the position ahead of the former BTCC champion.

The top ten was rounded out by an incredible drive from series returnee Ant Whorton-Eales. The AmD MG man was embroiled in a number of battles during the race and he eventually claimed the spot by making a double pass by Aiden Moffat’s Mercedes and Daniel Lloyd’s Honda.

Ash Sutton said: “When I saw Jason in an incident I thought ‘please don’t bring out a safety car’. It made my life ten times harder and brought Josh (Cook) right back into it. Our performance in the dry isn’t the strongest. Josh’s outright pace was a little better than mine but the team have done a great job. I originally thought we’d struggle to hold it so I’m really pleased with that one. It’s very much like last year. The competition has upped its game this year but we’re not at the peak of our performance yet.”

Josh Cook said: “As the safety car came out, I was unsighted towards the marshal post when I made a move on Dan (Cammish). I played it safe and gave the position back. The Astra has been amazing all weekend – entry speed was mega in that one. Hopefully it’s put us right back into the fight. We’re here for the long game and ultimately the championship. It’d have been a big risk for us to take the potential win, so I needed to play it safe and bring the points home.”

Tom Ingram said: “I don’t know where it came from. There was huge frustration after the first one. My aspirations for this were to break into the points and hopefully gain solid points. Obviously, the safety car played a part and helped us out. We had so much support on Instagram, Twitter and Facebook after Race 1 and that really spurred me on here.”