Hamilton wins Hungarian Grand Prix ahead of Vettel and Raikkonen 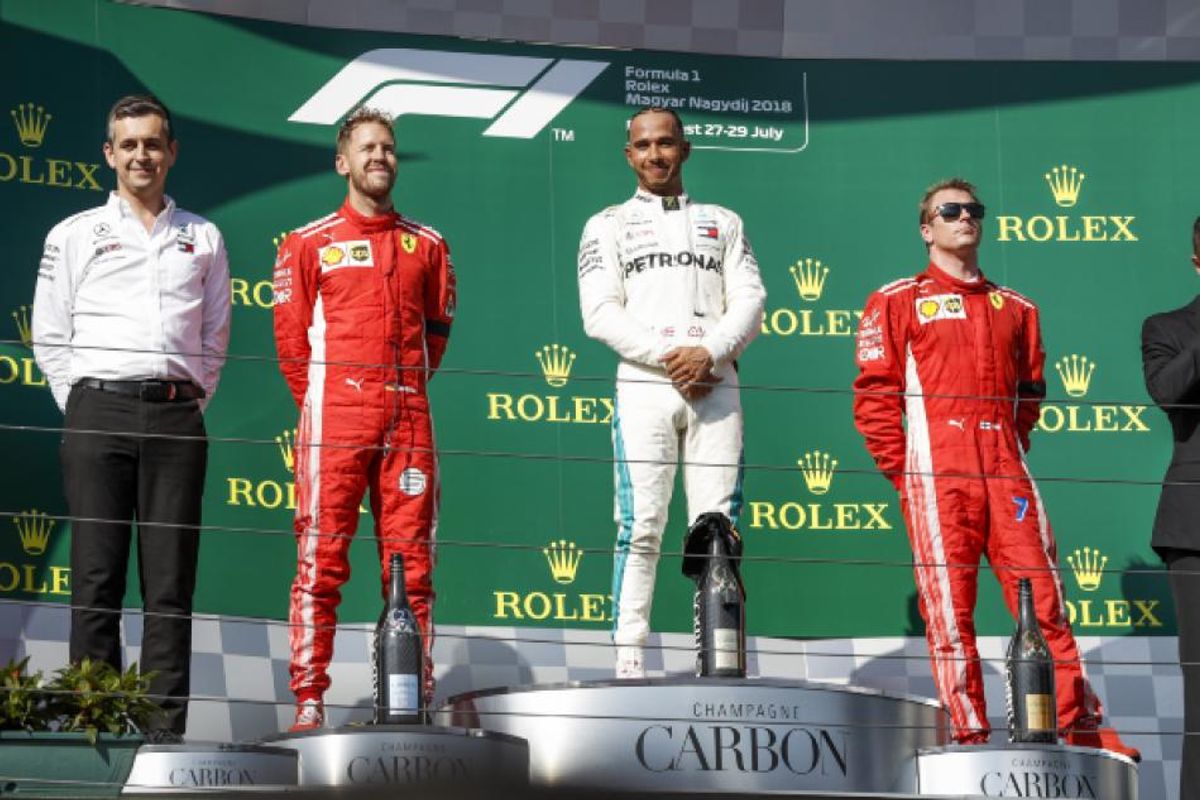 Lewis Hamilton took his fifth win of 2018 with a comfortable drive to victory at the Hungarian Grand Prix, as Sebastian Vettel survived a late collision with the second Mercedes of Valtteri Bottas to take second place ahead of Ferrari team-mate Kimi Räikkönen.

In the later stages of the race Bottas was then involved in a second collision, with red Bull’s Daniel Ricciardo and eventually finished fifth behind the Australian.

At the start, Räikkönen made the best start, but though he tried to pass polesitter Hamilton on the inside, Bottas came across and blocked the path. As the leaders swept through the first three corners, Vettel was then able to get ahead of his team-mate who had taken a wide line.

Behind them, Verstappen made a good start and passed Toro Rosso’s Pierre Gasly, while Renault’s Carlos Sainz, who had started fifth, slipped back to eighth. That meant that Verstappen held fifth place ahead of the Gasly, the fast-starting Haas of Kevin Magnussen, Sainz, the second Toro Rosso of Brendon Hartley and Renault’s Nico Hulkenberg.

Towards the rear of the field Daniel Ricciardo, in the second Red Bull, got away well but on the run to Turn 1, Sauber’s Marcus Ericsson collided with the Australian’s left rear wheel. There as no damage but Ricciardo dropped to P16.

There was worse news for Red Bull a few laps later when Max Verstappen slowed dramatically in Turn 3. He reported a loss of power and was told to pull over at Turn 6 and retire from the race.

Ricciardo was soon on the moved from 16th and by lap 10 he had climbed to 11th place, passing McLaren’s Fernando Alonso under DRS into Turn 1 at the start of the lap.

At the front Hamilton was building a gap, with the Briton 3.9s ahead of Bottas at the start of lap 10 and 6.2s clear of Vettel. Räikkönen was now a second behind his team-mate with Gasly in fifth place ahead of Magnussen and the second Renault of Sainz.

Sainz’s stay in P7 wouldn’t last long, however. Ricciardo’s march through the pack continued and having passed Hulkenberg and Hartley under DRS in Turn 1, he repeated the move on Sainz on lap 16, diving down the inside to steal P7.

The window for first stops was open at this point and prior to Ricciardo’s move on Sainz, both Räikkönen and Bottas had stopped for soft tyres.

Hamilton and Vettel, though, stayed on track. By lap 23 Hamilton had 7.3 seconds in hand over the German, who made a mistake and locked up at Turn 12. Bottas as now third, 27s behind Vettel, with Räikkönen fourth, almost four seconds clear of Gasly and with a stop in hand.

Vettel recovered from his laps and once again began to exert pressure on the ultrasoft-shod Hamilton. The German’s superior pace led to Mercedes pitting Hamilton on lap 25. He took on soft tyres and rejoined in P2 ahead of Bottas and 13.629s behind Vettel who continued to circulate.

Behind them Ricciardo continued to make progress and by lap 28 he was up to P5 having eased past Magnussen and Gasly. Räikkönen, meanwhile, was beginning to close on Bottas and on lap 30 Ferrari’s Finn was just 2.3s behind his Mercedes-driving compatriot.

Vettel was also encountering the traffic and the front his lead over Hamilton, who was in free air, began to shrink and on lap 36 he was just 10s ahead of the Mercedes man.

Räikkönen then backed out of the battle with Bottas and made a second stop, taking on more softs. He rejoined in P5 and immediately began setting purple times as he chased after Ricciardo who was still on starting soft tyres.

A lap after Räikkönen switched tyres, Vettel did the same. The German took on ultrasofts but there was a momentary problem with the front left and he emerged in third place behind Bottas.

Ricciardo was the last of the front runners to pit and the Red Bull driver took on a set of ultrasoft tyres at the end of lap 44. The effect was immediate and he was soon setting purple times as he tried to chase down Räikkönen.

Further back, behind sixth-placed Gasly and seventh-placed Magnussen, late pit stops had also benefited McLaren and after their stops, Fernando Alonso and Stoffel Vandoorne were in eighth and ninth places respectively. It was too good to last, however, and on lap 51 Vandoorne slowed and pulled over at Turn 1 to retire. That boosted Sainz to P9 ahead of Grosjean.

At the front, on lap 55, Hamilton was now 13.7s ahead of Bottas. Vettel was desperately trying to find a way past the Finn but the longer he sat in the Mercedes’ wake the more damage was done to his tyres.

The German kept probing, however, and on lap 57 Bottas radioed through to say he was struggling with his rear tyres. Vettel closed to within DRS range of Bottas, but the Finn did a superb job of managing the gap and his tyres life to hold off the German for a long spell.

It came to an end on lap 65, however, as Vettel launched an attack around the outside into Turn 1. He made the move stick through Turn 2, but as they went into the next corner, Bottas collided with the rear of Vettel’s car.

Despite the showers of carbon fibre as elements of Bottas’ front wing disintegrated, Vettel suffered little damage and carried on to claim an eventual second place behind Hamilton. Räikkönen then swept past Bottas to take third.

In the final laps Bottas now fell back into the clutches of Ricciardo but when the Red Bull driver pounced, around the outside in Turn 1, Bottas went straight on into the side of Ricciardo’s car.

Both drivers were able to carry on but Mercedes soon instructed their driver the cede fourth place to Ricciardo due to the collision and the Australian completed a successful day with a 12-point haul. Bottas was left to take fifth place ahead of Gasly who handed Toro Rosso its best result since his fourth place in Bahrain earlier this season. Kevin Magnussen was seventh for Haas, while Fernando Alonso celebrated his 37th birthday with an good drive to eighth place. The final points positions were taken by Renault’s Carlos Sainz and Haas’ Romain Grosjean.