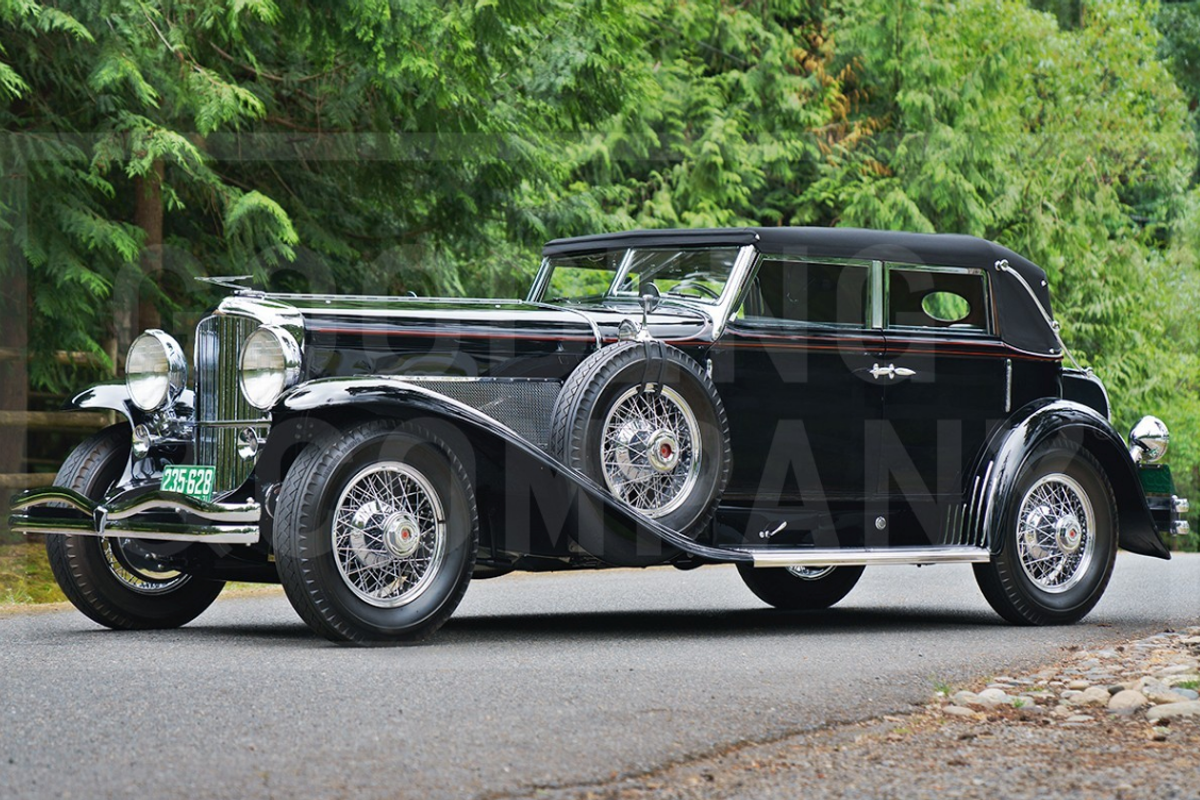 THIS CAR
Duesenberg’s early promotion for its Model J made a bold claim: “The World’s Finest Motor Car.” Following its introduction at the New York Auto Salon in December 1928, the public realized this was not advertising hyperbole; the Model J established new levels of automotive excellence in performance, engineering, styling, and luxury.

This car, chassis 2506, with engine no. J-488, utilizes the 142.5″ wheelbase and is one of five Derham convertible sedans, a design penned by master artist Gordon Buehrig.

According to correspondence in the car’s file, J-488 was originally used as a factory demonstrator, and around 1934 was acquired by Alexander Tiers of Los Angeles, its first private owner. Cinematographer Harold Rosson, whose credits include The Wizard of Oz and Singin’ in the Rain, and who was married to Jean Harlow at the time, was the car’s next owner before it went to noted shop owner Bob Roberts circa 1938.

According to the file, it is believed that either Roberts or mechanic Joe Reindl swapped the engine, supercharger, hood, and exhaust manifold from J-208, a Model SJ Murphy Convertible Sedan, into this Derham Convertible Sedan. Photos of the car at Roberts’ facility from the period with these features are included in this car’s file, though the supercharger would subsequently be removed at some later point. In 1946, the Derham Convertible Sedan was sold to James Talmadge, the son of film star Buster Keaton, who reportedly owned eight Duesenbergs. Letters from Mr. Talmadge in the car’s file offer insight into his enthusiasm for the marque and experiences with this car.

According to a Bill of Sale, in late 1947, Mr. Talmadge sold the Model J to Wharton Bryan, who sold it shortly thereafter to Gerald Strohecker, an Oregon grocery store tycoon and a Duesenberg enthusiast who owned two other Model Js. Mr. Strohecker rebuilt the car, adding a personal note, dated June 1952, inside a door panel: “This Duesy was rebuilt by Jerry Strohecker 1947–1951, and won Grand Sweepstakes ribbon July, 1951 at the (H.O.C.O.) annual meet. To the new owner, take loving care of this Duesy. There may have been other Duesys, but none were as beautiful as mine. The motor was rebuilt from top to bottom (by me) and was a wreck before I bought it in L.A. Calif. 1947. I will never sell this Duesy while I’m alive!!”

True to his word, Mr. Strohecker proudly owned the car until his death in 1969, at which time it, along with another Model J, were bequeathed to his friend, Charles Norris, also of Portland, Oregon.

Thomas and Susan Armstrong of Issaquah, Washington, acquired the Derham Convertible Sedan from Mr. Norris in November 1977, and have owned it for the past 41 years. Mr. Armstrong, who later owned such desirable cars as a Grand Sport Corvette, 8C Alfa Romeo, and Jaguar D-Type, had always wanted a Model J, and with adamant support from his wife, made that dream a reality with the purchase of this car.

Shortly thereafter, the always-fastidious Mr. Armstrong embarked on researching the car’s history and validating its authenticity, learning that it carried the bell housing from J-208, the result of the engine switch made decades earlier. That car was found and a trade of bell housings was orchestrated, returning both Duesenbergs to their correct numerical configuration. Extensive correspondence and receipts document the car, including this correction, culminating in 1982 with Auburn-Cord-Duesenberg Club Category 1 Certification no. D-006, indicating it as the sixth Duesenberg to complete the rigorous review for authenticity. In the 1980s, Mr. Armstrong sourced and installed a supercharger through his friend Tommy Crook, returning J-488 to its late-1930s specification.

J-488 was enjoyed on numerous occasions, including a CCCA CARavan, three Duesenberg Tours, and the 1991 California Mille. Concours showings include the 1999 Pebble Beach Concours d’Elegance®, a 2008 CCCA First Place, and Best of Show at the 2013 Forest Grove Concours d’Elegance. In 2011, J-488 was one of just 16 automobiles selected by curator and historian Ken Gross for the Allure of the Automobile exhibit at the Portland Art Museum.

Today the car is finished in gleaming black paint with a matching canvas convertible top, accented by red pinstriping. The rare eight-port manifold outwardly signifies the presence of the 320 hp supercharged engine. The interior is finished in brown leather, and rear-seat passengers are privy to the car’s performance capabilities via a speedometer and chronograph mounted in the rear division console.

Accompanying the Duesenberg at auction is an extensive history file that includes numerous period pictures, volumes of correspondence with marque experts, and the ACD Club certification. Also included are an original eight-port exhaust manifold, and eight piston and rod assemblies removed during the engine rebuild.

Typical of cars in the Armstrongs’ collection, J-488 remains in excellent condition and offers the rare combination of supercharged Model J exclusivity, original open coachwork, and unquestionable style. Just three owners have enjoyed this spectacular car over the last 70 years, presenting its next owner the opportunity to chart its next chapter on the road or show field.