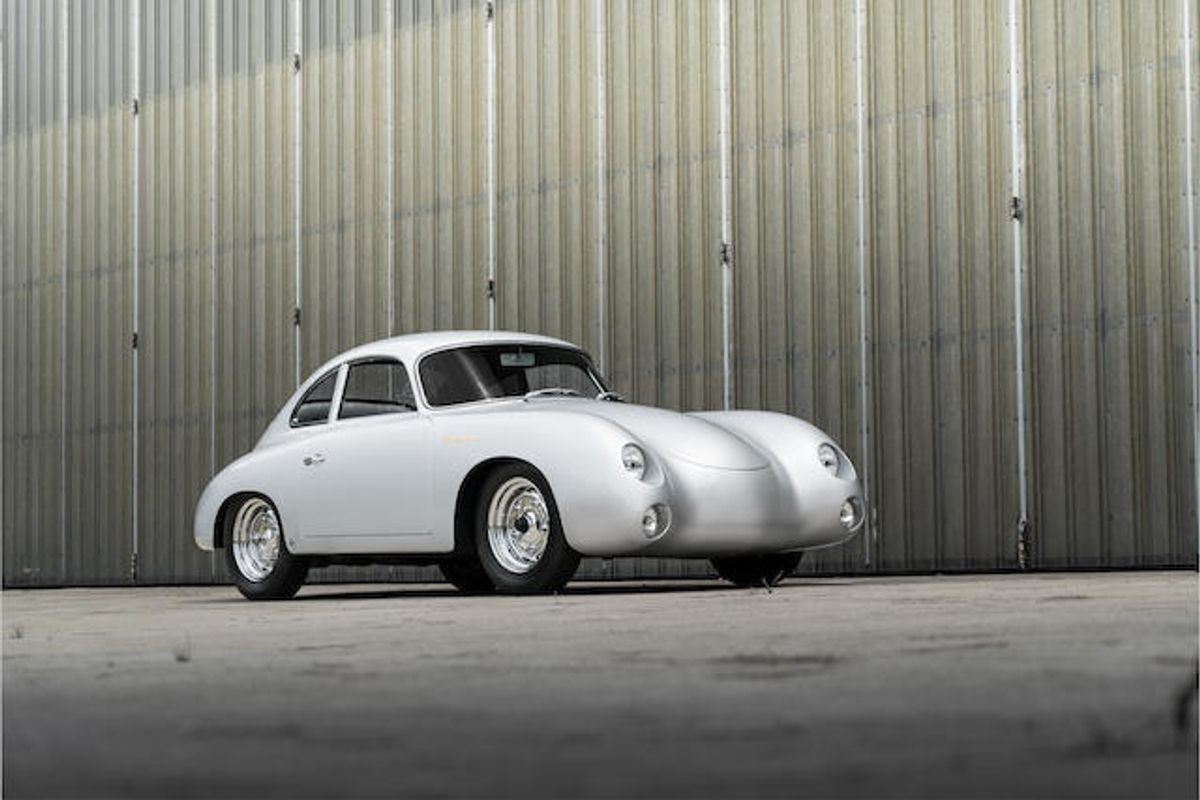 *Original Carrera with documented history.
*Customized in period by the legendary Dean Jeffries.
*A significant car from the Golden Era of Custom Cars.
*In current ownership since 1971.
*Current FIVA identity papers. Number 072874

Originally introduced at the 1955 Frankfurt Motor Show, the 356 Carrera was the first edition of Porsche's long-running prestige performance car, featuring a special race-bred engine in development since 1952. Dr. Ernst Fuhrmann was tasked with determin-ing just how much power the classic Porsche flat-four motor could develop, and in this pursuit, he made some fundamental engineering adjustments over the basic pushrod engine. These modifications included the addition of twin ignition, two twin-throat carbu-retors, and dry-sump lubrication. The most important development; however, was the implementation of dual-overhead camshafts. With precision and reliability being the two main goals for an engine destined for competition, normal chain or belt driven timing was curbed, instead, and a complex system of shafts and bevel gears kept the valves moving.

The 550's originally fitted with this motor were true giant killers. The verified combination of light weight and supreme power proved to be an immense advantage over the heavi-er, larger displacement opposition; it allowed the nimble racers to carve up the competi-tion all across Europe. Victories were scored at famous events, such as the 1000km of Nürburgring and even the notorious Targa Florio. With many private owners of the 550 being able to drive to the tracks, compete, and then arrive home, all in the same car, the reliability of the dual-cam engine proved useful enough for road use.

Porsche factory staff arrived at a similar conclusion and began to test the engine as an alternative to the pushrod motor in their own personal cars. Eventually determining that the 356-based road car was the most opportune platform for the type 547/1 engine, Porsche used the Frankfurt show to debut the Carrera, aptly named after the famously grueling Mexican road race, at which Porsche had dominated the 2-liter class. From the factory, the full range of 356s body styles, Coupe. However, only 225 of these Coupes were produced during the initial production run, making them a rare sight on the roads. The motor even allowed the 356 to further remain a competent racer on the track. Many owners took part in motorsport events in anything from near stock examples to fully specified race cars. Porsche would continue to produce the Carrera, eventually in-creasing the displacement all the way up to 2-liters.

There are many icons from the Golden Age of hot-rodding. One of these was Dean Jeffries, a talented custom painter and car builder in the Los Angeles area. In 1957, Jeffries was renting space from another legendary customizer, George Barris, and working as a contract painter where his resume included painting such notable Barris classic custom cars as the A La Kart, the R&C Dream Truck, and the Aztec. Jeffries was also friends with many Hollywood screen legends including James Dean who enlisted Jeffries to paint the numbers, on his fateful 550 Spyder.

Dean Jeffries acquired the Carrera from the original owner in 1957. Wanting to be known as more than a painter. He removed the bumpers, extended the nose, added frenched headlights, a rear scoop with custom grille, handmade taillights, and roof vents. It does seem that everyone in the Barris shop pitched in to work on the car.
Dean was one of the pioneers of new painting techniques, including the use of pearls and metal flake; the car was painted in pearlescent silver and used aircraft clear as a topcoat. He also applied silver leaf to the dashboard, built turned aluminum panels for the door jambs and engine compartment, and chromed the sheet metal on the engine.

The car won over thirty first place trophies at car shows in southern California during the late 1950's and early 1960's. Dean's own admission was that the Carrera was the car that effectively launched his career. The Carrera was featured in many of the mag-azines of the era, including the cover of the October 1959 Rod & Custom.

The Dean Jeffries sold the Carrera to Albert Nussbaum, at the time painted gold, some-time in early 1962. Mr. Nussbaum, had completed a string of successful bank robberies and was on FBI ten most wanted list. Nussbaum used the car to drive to Florida, where it was seen in his sister's driveway. The Carrera then disappeared for a few years, likely in a government impound facility.

The car resurfaced in 1966, when it was purchased by Mr. Randy Toole. Mr. Toole had the ailing 4-cam engine replaced with a conventional pushrod engine, and painted the car white. He retained the car until 1968. The Porsche was then purchased in 1969 by Sandy Hunter, in Florida, and driven to Atlanta. In 1970, Sandy sold the car to Margaret Daole. It was at this time that the consigner first saw the Carrera, and it was love at first sight. The car was acquired in 1971.

The consignor drove the car regularly for a few years, and even auto-crossed in a few events. The Porsche was repainted white with a blue stripe and a replacement 4-cam engine from a 550 Spyder was installed.

The Carrera would remain nearly unchanged until the consignor began his restoration in the late 2000's. The 4-cam engine fitted was discovered to be the original race engine for Porsche Spyder 550-0022 that raced at Sebring in 1955. The Spyder's owner of-fered to trade a freshly rebuilt 1600cc plain bearing engine from a 1959 Carrera in ex-change. The engines were exchanged and the current 4-cam unit installed.

In 2007, the consignor was introduced to Mike Marcelic, a true craftsman whose has won multiple first place awards. The restoration was started in 2008, and was complet-ed in 2011, after the Glasurit Corporation was persuaded by Bill Warner to donate the materials to the restoration. A Glasurit representative went to Dean's shop in Holly-wood, where Dean personally selected a match for his original color. The car was un-veiled for the first time at the Amelia Island Concours in 2011, in front of Dean Jeffries.

In 2016, the Jeffries Carrera was invited back for its second appearance at the Amelia Island Concours and again in 2018. In recent months, the Carrera was filmed for an episode of Caffeine and Octane where Magnus Walker interviewed the consigner about the history of the car that is said to have inspired the entire Outlaw Porsche movement.

This particular 356 Carrera is a unique piece of American motoring history. Modified in period by one of the most legendary customizers and hot rodders from the Golden Age of custom cars and presented with a current FIVA passport. It is also offered with an extensive history file. The opportunity to purchase this unique piece of German and American motoring history should not be ignored.