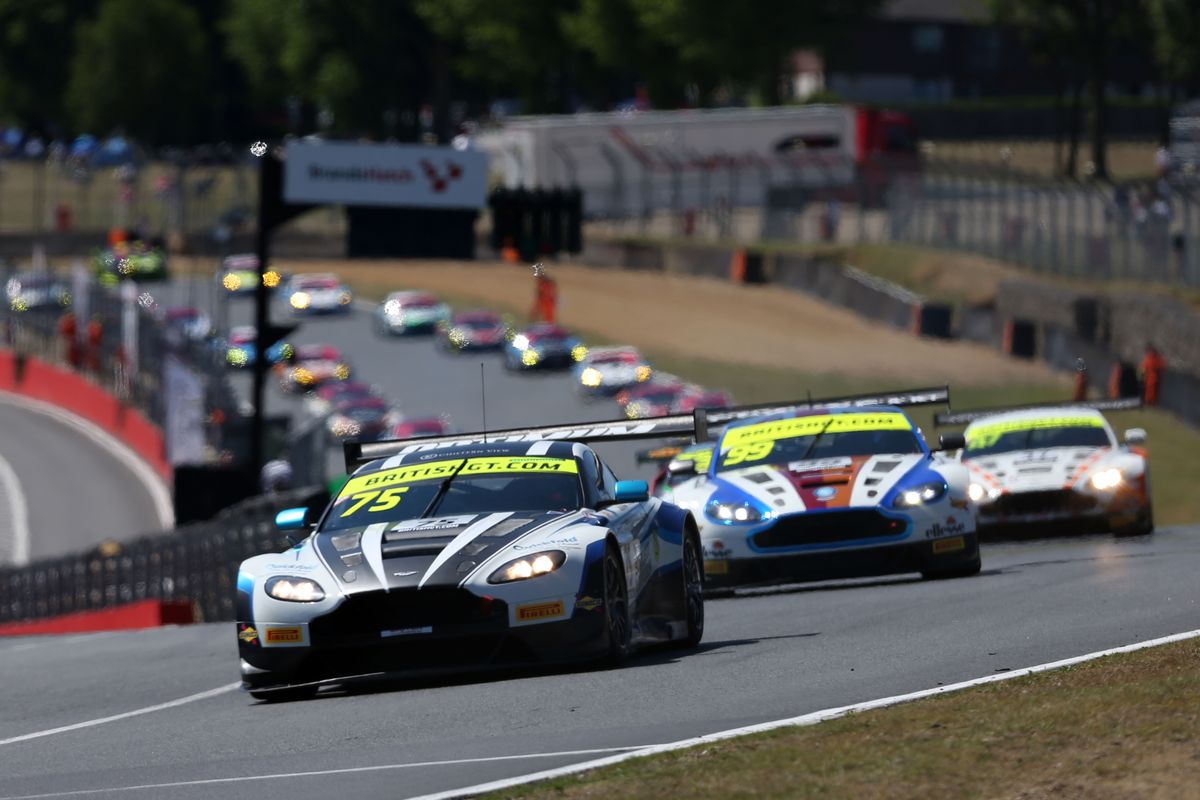 It was a near perfect weekend for Optimum Motorsport in the British GT Championship at Brands Hatch (4-5 August).  From pole position Flick Haigh and Jonny Adam dominated round eight of the championship to take the victory and put themselves firmly in contention for the championship honours at the season finale at Donington Park.

Along with much of the field, the team hadn’t had the chance to test at the circuit, taking part only in a track day ahead of the penultimate round in the championship. Flick and Jonny proved to be on the pace throughout practice, but it was qualifying that the duo showed their true pace in the #75 Aston Martin Vantage, with Flick and Jonny recording their third pole position of the season.

Having finished third at Spa-Francorchamps two weeks ago, the team faced a ten second success penalty during the race. This meant that Flick would ideally try and gain an advantage at the front of the field to mitigate this.

Race day saw Flick make a fantastic getaway from the front of the field, quickly establishing a five-second margin by lap six. This extended to an impressive 17 seconds by lap 18 – underlying her pace against a very competitive field – only for a Safety Car deployment which undid all of her good work.

Another Safety Car soon followed but Flick was able to regain the advantage at the front, to ensure that after the mandatory driver change, Jonny was able to re-join second overall, despite the additional ten seconds stationary in the pits.

With just the Barwell Motorsport entry of Jonny Cocker separating the team from the second win of the season, Jonny made the move with just two-minutes of the race remaining after a small mistake from the #69 entry offered the opportunity to pounce.

It was a sensational performance from the team and drivers, one which moved them to the top of the championship standings with 139.5 points, 17.5 clear of their nearest rival with just one round remaining.

Shaun Goff, Team Principal
“It was a little surreal getting the first win so early on in the season and it just fantastic to get chalk up another, that’s now three podiums in a row and we find ourselves in a strong position to take the title fight right to the end. I’m also aware that leaders of the championship in previous years have not always left Donington with the result they wanted.

“Flick’s stint was critical in this result to ensure that we were in the race after the success penalty for the win after the driver change. The Safety Car certainly made life more difficult for us but on this occasion the team, drivers and everyone involved performed exceptionally well and we find ourselves at the top. If we repeat this level of performance, I’m confident that we will be in a championship winning position.”

Flick Haigh
“It’s a really good result. We’ve had our ups and downs as everyone does in the championship, but when it all comes together, there is no better day. I can’t thank the team and Jonny enough for all of the work they have put in. Everyone gives their maximum and we all got the reward for it.

“The pace was excellent from the car and I just kept on pushing – doing the times and doing it again – and then I looked in the mirror and I had a good gap. We then had the Safety Car, these things happen, you just have to deal with the situation at the time. I had time to think behind the Safety Car, reminding myself to just do the same as before to try and overcome the ten second success penalty and we did it.”

Jonny Adam
“Flick only had four or five flying laps to pull the gap and that was so important to get ahead of the Beechdean AMR, so it was a great result and we’re leading the championship.

“I was running P2 after a great run from Flick and just trying to be sensible to ensure we got the points needed for the championship, but you always want to win. It wasn’t a risk though because as soon as he made that tiny error, that was enough for me to take the opportunity and go for it.