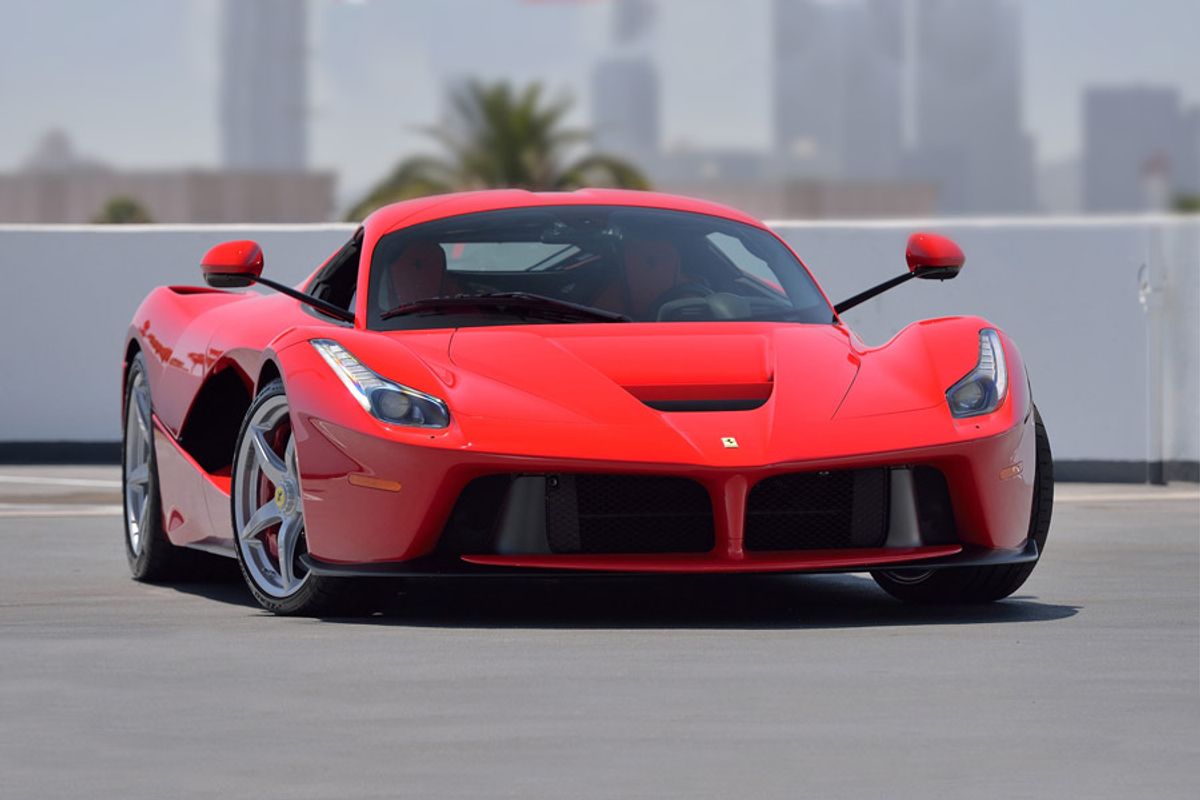 The LaFerrari’s hybrid drive system combines a 161 HP electric motor with the most powerful V-12 engine ever to power a Ferrari road car, a naturally aspirated 6.3L behemoth controlled by the Ferrari/Bosch Electronic Engine Management system and incorporating the dynamic ram-effect induction system from Ferrari’s F1 program. Factory rated at 789 HP at 9,000 RPM and 516 lb-ft of torque at 6,750 RPM, it is one of the most powerful naturally aspirated production piston engines in the world. Supplemented with the electric motor’s 161 HP and 199 lb-ft of torque, the output of this hybrid drive system is a fearsome 949 HP and 663 lb-ft of torque, all of which is delivered to the rear wheels via Ferrari’s superb F1 7-speed dual-clutch gearbox. In contrast to other manufacturers’ practice of employing an electric motor as an alternate source of motive power, the LaFerrari’s F1-sourced HY-KERS Kinetic Energy Recovery System is designed to supplement the V-12 engine in those fraction-of-a-second moments when operating at low crank speeds, such as during shifts or when beginning to accelerate out of a low-speed turn. Harvesting its power from the application of the LaFerrari’s new 4-wheel Brembo carbon-ceramic disc brakes, the electric motor’s input is virtually indiscernible, but its contribution to the LaFerrari’s awesome performance is significant, facilitating an uninterrupted flow of power all the way up to its limited top speed of 217 MPH.

Another seamless contribution to the LaFerrari’s performance comes from its F1-sourced electronic traction-control system, which constantly controls and distributes torque to the driven wheels through the third-generation E-Diff electronic differential that maximizes traction, and the stability-control system, which monitors the car’s responses. These controls are supplemented by the LaFerrari’s Electronic Brakeforce Distribution (EBD) Performance Anti Blockage System, essentially an advanced anti-lock braking (ABS) system that monitors input from the tires and yaw sensors and then applies individual brakes as needed to keep the car on its intended course. Like the electric motor’s contribution to acceleration, the EBD system’s involvement goes almost unnoticed, but its effect is translated perfectly to the road through the LaFerrari-specific Pirelli P-Zero tires fitted to 19-inch front and 20-inch rear forged aluminum wheels.

The active aerodynamics carefully designed into the LaFerrari are seamlessly integrated with the rest of its dynamic control systems. The LaFerrari’s body is chiseled to slice through the air, cleaving it with the F1-style front spoiler and channeling it to the large active rear spoiler and moveable flaps located within the rear diffuser tunnels. The LaFerrari’s passenger accommodations are both functional and luxurious. Its contoured seats are covered in supple Italian hides, with occupants held securely in place by F1-style multipoint harnesses. Because the seats are mounted directly to the strong, lightweight carbon-fiber tub, the LaFerrari features an adjustable steering wheel and pedal box to suit different drivers. The reconfigurable digital instrument panel and large column-mounted shift paddles are placed behind the rectangular F1-style steering wheel, which positions the start button, “Manettino” driving mode selector and audio system controls close at hand. Other secondary controls for audio, navigation, climate and telemetry are located on the dash and driver’s door.

This 2014 LaFerrari is invested with the design and technical expertise of arguably the most advanced automotive manufacturer in the world, a fact that manifests in its thrilling performance and sublime beauty.

The LaFerrari takes full advantage of Ferrari’s knowledge of composites in the construction of its central monocoque and passenger compartment, which is constructed from four different types of cloth that are hand-laid in specific patterns before the finished piece is cured in Ferrari’s own autoclave facility. The LaFerrari’s active aerodynamics, also derived from F1, incorporate a large adjustable rear spoiler, movable diffuser flaps designed to flex at specific speeds to redirect air for greater downforce, and one of the most ambitious rear diffusers ever seen on a road car.

The suspension is conventional in its architecture, comprising front upper and lower wishbones and a multilink arrangement at the rear, all connected to the monocoque with bushings carefully calibrated to communicate the perfect level of compliance to the driver. Magnetorheological damping with twin solenoids combines with stability control and F1 electronic traction control (integrated with the hybrid system and third-generation electronic differential) to ensure predictable handling at the limit, and electronically balanced Brembo carbon-ceramic disc brakes are there to efficiently reverse the process through the LaFerrari’s Pirelli P-Zero tires on lightweight 19-inch front and 20-inch rear wheels.

The LaFerrari is the first production Ferrari to draw on the company’s experience with hybrid racing powertrains, pairing the world’s most powerful V-12—a 6.3L DOHC unit with Ferrari’s proprietary Dynamic Ram Effect induction system and rated at 788 HP—and a 161 HP electric motor for a total of 949 horses. Its F1-inspired HY-KERS Kinetic Energy Recovery System actually surpasses the performance of its racing counterpart in its job of integrating the two power sources. Thanks to the electric motor’s instant torque delivery, it can provide the low-speed grunt—including during the microseconds between shifts in the LaFerrari’s 7-speed, dual-clutch F1 automatic gearbox—that allows the V-12 the freedom to roam the upper reaches of its power band, all the way up to its bellowing 9,250 RPM limit.

Finished in gregarious Giallo Modena with Grigio alloy wheels and yellow brake calipers, this 2015 LaFerrari has traveled just 419 original miles, a figure reflected in its factory-fresh presentation. Precious Prancing Horse cloisonné badges hold a place of honor on the LaFerrari’s swing-up gullwing doors, and the radically aerodynamic bodywork has been trimmed with optional carbon-fiber trim pieces including the fog-lamp surrounds, mirror stalks and lower body trim. Its cockpit offers an environment that can, without any stretch, be likened to that of a modern executive jet, cocooning occupants in form-fitting black leather seats with yellow piping and stitching. The steering wheel operates in F1 fashion, incorporating shift lights, ergonomic shift paddles and Manettino-actuated driving-mode selection. Both the steering wheel and pedals can be adjusted to suit the driver. The instrument panel's secondary controls for audio, navigation, climate and Ferrari telemetry are located on the door and the center of the dashboard, placing the most important controls directly in front of the driver. A reconfigurable digital instrument panel gives the choice of a traditional central tachometer or a more competition-derived display.

The LaFerrari’s sensational performance is already the stuff of legends, and it is all in the numbers: 0-60 MPH in 2.4 seconds, 124 MPH in less than 7 seconds and 0-186 MPH in an astounding 15 seconds. Reaching its top speed of 217 MPH is a sublime experience made all the better by the shriek of that wonderful V-12 engine.

This cutting-edge Ferrari supercar is offered with every factory ancillary, including the car cover, battery charger, two-piece luggage set, books and keys, and all in pristine as-delivered condition.