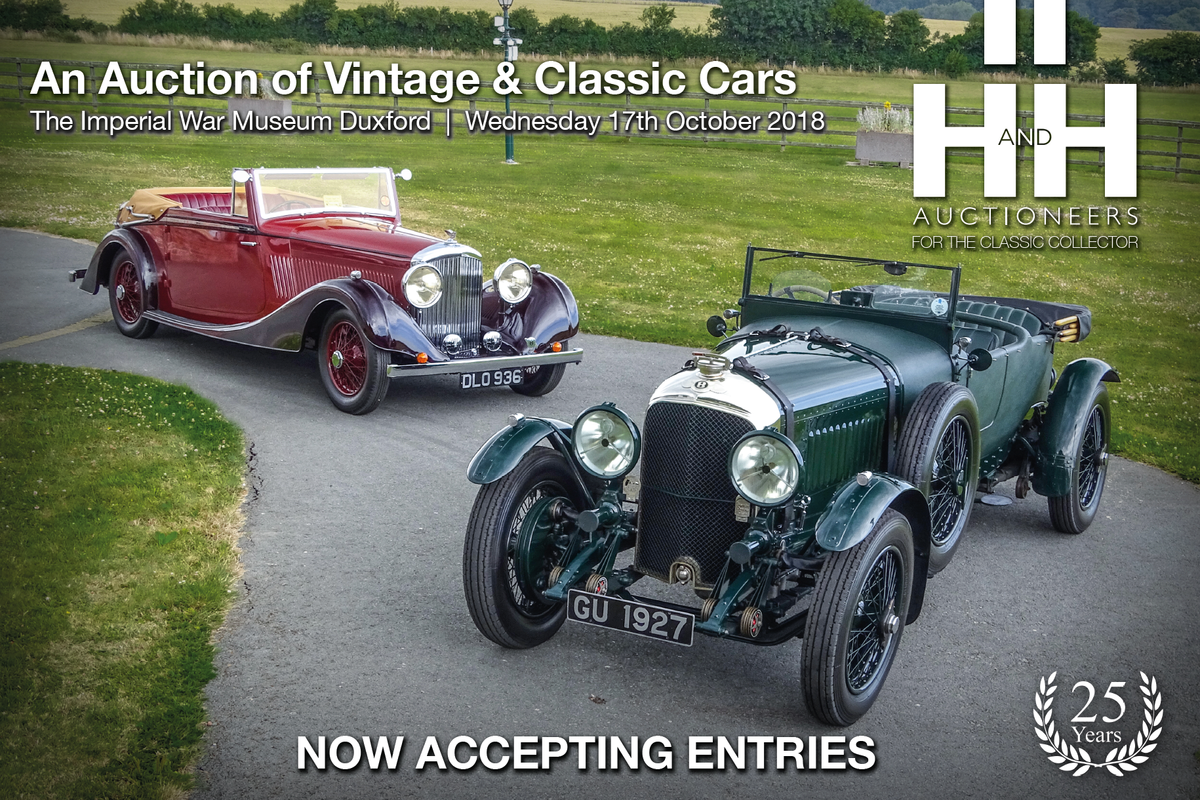 H&H Classics believes chassis B135FC to be the most original and best-preserved Derby Bentley in the world and will be selling this lovely car on October 17th at its next auction at the Imperial War Museum, Duxford in Cambridgeshire. The car is estimated to sell for between £450,000 to £550,000.

First registered as `DLO 936' on March 1st 1937, chassis B135FC was supplied new to Robert S. Hayward Esq. of The Hawthorns, Galashiels. A director of the nearby R & A Sanderson Woollen Mill, he covered a modest 11,000 miles aboard the Bentley before offering it for sale via R. Webster’s small dealership located off Union Street in Edinburgh where it was spotted by W. Randolph Angell Esq.

Recalling the encounter in his memoirs the latter described it thus: "How does one cope with blind passion? I was a ruined man. A visit to the showroom for a closer look was devastating. The car was immaculate, perfect, with tonneau covers and spares etc which had never been used. The asking price was beyond my means and in any case I had no driving licence or any sensible place to keep the car even if I were able to acquire it".

Further showroom visits ensued as did the prospect of losing `DLO 936' to a South African collector. Suitably panicked, Mr Angell found the requisite funds and became its proud owner during May 1954. Accompanying documentation includes correspondence between Messrs Hayward and Angell, handwritten receipts from Mr Webster for the purchase price (£1,350, 7th May 1954) and tax / insurance (£32, 18th May 1954) plus another for seven driving lessons (£5 8s 1d, 8th June 1954).

Treasuring the Bentley, its new owner acquired a Riley Kestrel 15/6 for everyday usage and later a Jaguar E-Type V12 Roadster to drive on high days and holidays. Kept in professional storage when not being sparingly enjoyed, accompanying MOT certificates issued in May 1970 and April 1980 list recorded mileages for the Vanden Plas Drophead Coupe of 15,030 and 15,195 miles respectively. One of its few public outings was to the ‘Bentley Shell 500 Golden Jubilee 1919-1969’ celebrations at Oulton Park (a sticker for which remains affixed to the windscreen).

Ever wary that a road traffic accident would compromise its remarkable originality, Mr Angell ensured that ‘DLO 936’ spent less and less time on the public highway. Parked up in his garage for thirty odd years, it benefited from surroundings that were not only watertight but also conducive to preservation in terms of moisture and light levels. Reluctantly offered for sale by Mr Angell’s heirs in 2013, the Bentley entered the current custodianship that same October.

Blown away by the Vanden Plas Drophead Coupe’s condition, the vendor set about recommissioning it to an exhaustive, obsessional degree. For instance, he spent a week soaking the original fanbelt until it could be reused and was genuinely upset that the initial spark plugs could not be made to perform satisfactorily! Losing count after investing 1,500 hours of labour in the project, his efforts meant that all but one of the factory-fitted leather gaiters have been successfully reconditioned.

Keen to do the best job possible, the present owner enlisted the help of renowned Derby Bentley expert and the W.O. Bentley Memorial Foundation’s Chairman of Trustees, Ken Lea who carried out a first-hand inspection and advised on works. Mr Lea was reportedly amazed to discover that the ash frame in particular was so sound even down to the sawn ends of the scuttle hoops. A careful strip down of the original engine (number E9BC) revealed bore wear in keeping with the recorded mileage and more surprisingly that all six pistons were stamped with the chassis number B135FC.

After much deliberation the decision was taken to rewire the four-seater for safety reasons (the prospect of such an archetype of Derby Bentley originality going up in flames does not bear thinking about). Needless to say, the replacement wiring loom is cloth bound and faithful to factory blueprints. The seller also chose to install a higher final drive ratio inside the original rear axle casing and to replace the hood. The initial final drive ratio and hood come with the car as do letters between Mr Angell and Vanden Plas concerning the soft-top’s deterioration.

Where one of Vanden Plas’s standard Drophead Coupe bodies for the Derby Bentley chassis would feature plain wings, limited bonnet louvers and plain rubber covers for the running boards, the one fitted to ‘DLO 936’ sports more sculpted wings, louvers that extend through to the scuttle and individual rubber strips for its running boards. Interestingly, chassis B135FC was delivered some eleven months later than chassis B133FC (a Thrupp & Maberly Saloon supplied new to Lord Harris MC) so the former may well have been built to special order.

There really is no substitute for inspecting ‘DLO 936’ at first hand. Only then can one appreciate its freakish originality and state of preservation. A matchless testament to the craftsmanship of Bentley and Vanden Plas, the car is also a great credit to each of its three custodians: Robert S. Hayward (1937-1954), W. Randolph Angell (1954-2013) and the vendor (2013-present).