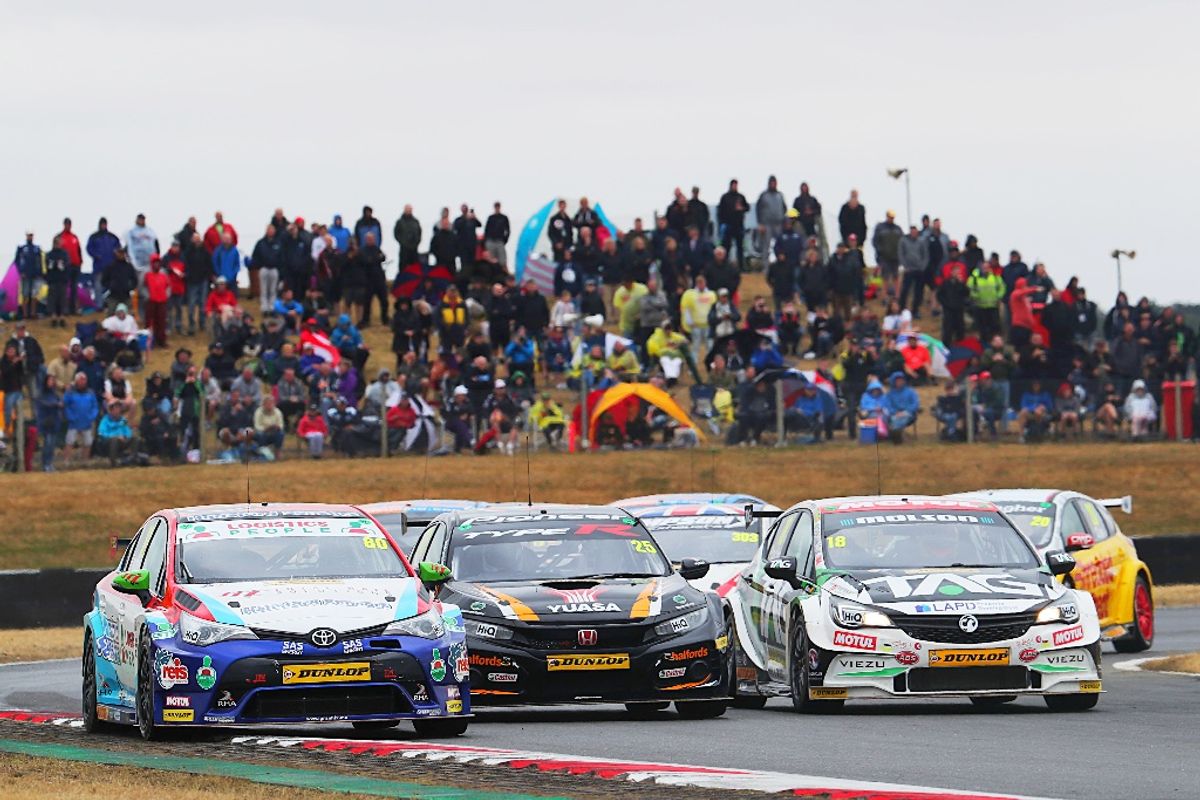 After a weekend of Diamond Jubilee celebrations last time out at Snetterton, the Dunlop MSA British Touring Car Championship moves on to its latest port of call – Northamptonshire's Rockingham circuit for Round 19, 20 and 21 of the 2018 campaign next weekend (11/12 August).

The trip has often proven a pivotal one as drivers fight to stamp their authority on the title as the competition heads towards the home straight. That said, there's still plenty of time for any number of contenders in Britain's top-tier motorsport series to make their move and put themselves in the shakeup for glory.

In any case, a weekend of enthralling action around the 1.94-mile circuit will entertain the crowds, and many more watching on ITV4. It was announced that Rockingham would not be part of the 2019 BTCC calendar, so all the more reason to visit one of the UK's more unique motor racing settings next weekend – the partial-oval layout is unlike any other.

As things stand...
Halfords Yuasa Racing's legendary BTCC racer Matt Neal took the honours in the showpiece 'Diamond Double' last weekend, and with double the usual quota of championship points up for grabs, he's brought himself right into the reckoning in the title charge, just 16 points adrift of the new pace-setter – Speedworks Motorsport's Tom Ingram.

The Toyota driver pulled a real rabbit out of the hat in race two, as he stormed through the field from 27th on the grid to seal a podium at the last – swiping third from Neal's Honda team-mate Dan Cammish by just 0.042 seconds as the pair crossed the line in a photo finish.

That wasn't the only photo finish of the day, either, as earlier on, in the opening round from Norfolk, WIX Racing with Eurotech's Jack Goff held on despite the best efforts of reigning champion Ash Sutton in the Adrian Flux Subaru Racing Levorg. Sutton had made it past the flying Honda Civic Type R as the pair duelled through the final sector of the final lap, but Goff fought back and, with good drive out of the final turn, pipped the Subaru man at the post to take the victory.

Sutton did bite back, sealing top honours in race two, ensuring he remains in contention as he looks to successfully defend his crown, a little under 40 points shy of the standings summit.

Having led the running on the way into Snetterton, Team BMW's Colin Turkington was forced into deploying some of his very best recovery driving to remain within touching distance. With a maximum complement of 75 kilograms of success ballast on-board his 1 Series, due to his position of championship leader ahead of the weekend, qualifying proved a real task. The Northern Irishman hauled the BMW to 15th and mid-pack for Round 16.

With the field so close and so competitive, the midfield battle always proves fierce and Turkington couldn't escape contact, which saw him fail to finish race two. A zero score required a comeback, and in the 'Diamond Double' Turkington profited with sixth spot, leaving him right on Ingram's coat-tails heading to Rockingham.

With almost 270 points still to play for in this year's championship, that margin, and the standings order, is more than liable to change, especially among the current 'power four' – Ingram, Turkington, Neal and Goff heading the way, separated by just 17 points.

The one-off 60-mile, ballast-free double-points race was announced ahead of the 2018 season as a special celebratory contest to mark the 60-year anniversary of the BTCC. As soon as it had taken up a spot on the calendar, teams and drivers clamoured to ensure they'd be in contention to win it.

Neal is one driver who performs when the gauntlet's thrown down, as his famous 1999 victory at Donington Park – the first outright Independent win in the modern era – attests. His 63rd BTCC victory at Snetterton last weekend was a special one for the 51-year-old, who made his series debut all the way back in 1991.

“It was a truly magical day for the entire Halfords Yuasa Racing team," said Neal. "To produce a result like that on a level playing field with no success ballast is testament to the pure performance and the fundamental competitiveness of the Civic Type R, as well as demonstrate how hard the team has worked to unlock its potential since the start of the season.

"We had a tough race one and two in tough conditions, but we were always confident for the ‘big one’ from the front row and while the car didn’t feel settled initially it got better and better as the race went on.

"Once I was in the lead I was determined not to put a wheel wrong, which was tough because Jack (Goff) and Tom (Ingram) were all over me, but the Civic Type R performed perfectly right to the flag. I’m so very proud to be part of another landmark BTCC moment, it is one I certainly won’t forget."

Timetable and Tickets
All three BTCC races on Sunday, 12 August – and the day’s other races – will be broadcast live and in high definition on ITV4. Those in attendance at the circuit can stay in touch with the commentary and live timing from every session, available at btcc.net/live throughout the weekend.

The support series on the TOCA package are also guaranteed to thrill, with a double-digit total of races set to entertain the crowds. Renault UK Clio Cup, F4 British Championship and the Ginettas will all be appearing, making for a jam-packed weekend of truly unmissable racing.

Advance tickets can be booked online at www.rockingham.co.uk or via the hotline on 01536 500500 (option 1). Weekend passes cost £42, Sunday race day tickets are £33.50 and Saturday entry price is just £13. General admission starts at £34 (no Sunday grandstand entry).

Rockingham prides itself on providing access to all motorsport fans, and those who are registered disabled can apply for a complimentary admission ticket for their carer, while children aged 16 and under get in free.