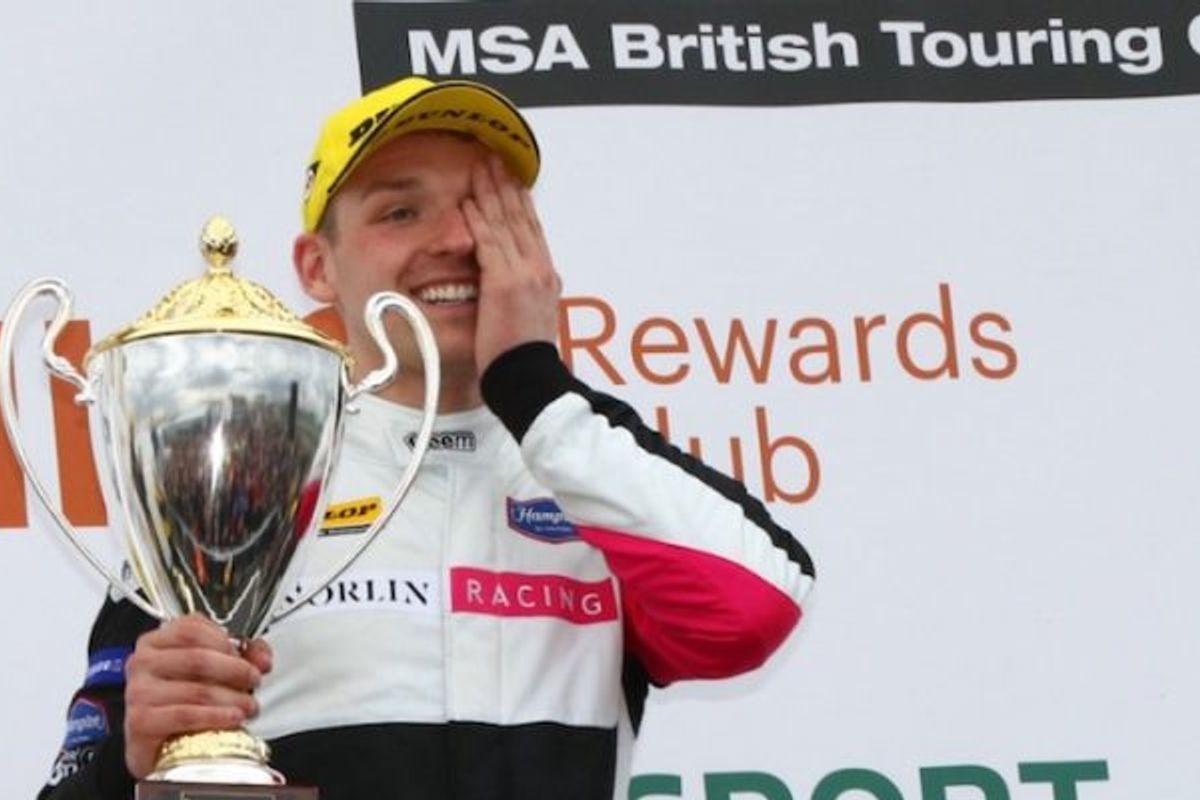 Proceedings got off to a rather bizarre start when debutant Ricky Collard’s BMW 125i M Sport broke down on the green flag and a series of race delays commenced whilst his stricken Team BMW machine was retrieved by the recovery team.

Rain began to fall slightly harder shortly before the race eventually got underway and pole-sitter Tom Chilton was the first to be caught out by the conditions at the first hairpin. Chilton’s Ford Focus RS slid wide, as did a series of others, and it was absolutely frenetic action as everyone fought for position.

When the positions were eventually settled it was Smiley leading from Matt Simpson’s identical Honda Civic Type R with a gaggle of cars headed by Colin Turkington in behind.

Another accident down the order and another safety car period followed, but it was soon the AmD MG of Rory Butcher making ground. He’d already attacked for the lead before being shuffled back by Simpson and Turkington, but the Scotsman fought back by the latter to move into the podium paying positions.

A setback struck Butcher on lap ten, however, when he too was caught out by the tricky conditions and ran his MG6 wide through the hairpin – losing three places in the process.

The podium eventually came down to the final run to the finish line as Simpson lost second to Turkington through Brook and then got caught by Motorbase man Sam Tordoff, as well as Tom Ingram’s Speedwork’s Toyota. In a dash to the chequered flag it was Simpson who got the nod by just 0.029s.

“I was hanging on towards the end and I snagged the front axle when Colin (Turkington) was getting stronger with the rear-wheel drive,” said Simpson. “After the win at Oulton Park, after all the well dones from everyone and fellow drivers, Colin sent me a message in the week and that meant the most. I look up to him. He’s a true gentleman.”

Butcher recovered to finish sixth, ahead of the brilliant Bobby Thompson in seventh. The VW driver produced an eye catching performance and made outstanding moves by Adam Morgan’s Mercedes and Ollie Jackson’s Audi to claim his best result.

Halfords Yuasa Racing’s Dan Cammish completed the top ten on what was largely a difficult day for the multiple champion Honda squad.

Post-race attention, however, quickly turned to Northern Irishman Smiley who has impressively taken his first win in dominant fashion.

“You’ve no idea what I’ve been through to get that win – I’ve been through hell and back,” he said. “I can’t thank Bert Taylor, Stephen Symington and Richard Irwin enough for everything they’ve done for me. They’ve put me here and had faith in me and that win is for them. This is the first time I’ve ever topped a practice, qualifying or a race and I can’t believe it. I’m so grateful to the team, all the guys and girls working so hard and to my sponsors. It could get a little bit fun later on!”

In terms of the championship shake-up, Turkington had sneaked back by Speedworks Motorsport’s Tom Ingram with a four point advantage with just three events remaining.

“That was excellent,” enthused Turkington. “I wasn’t feeling so confident on the grid with the rain falling. That’s where we tend to be weakest. I decided I’d go for it and try and get on the front foot and be aggressive but it was ultimately a race of patience for me. We had the speed in the car and it was about picking the right moment.

“It was good to get a points swing back in Team BMW’s direction and it’s always nice to bring one of these yellow Dunlop caps home for the kids! It’s points in the bag and I’d always rather that, even with the added pressure of leading the championship into a race weekend. We always enjoy Scotland whatever the result. A massive thanks must go to Team BMW – they grafted so hard all weekend.”