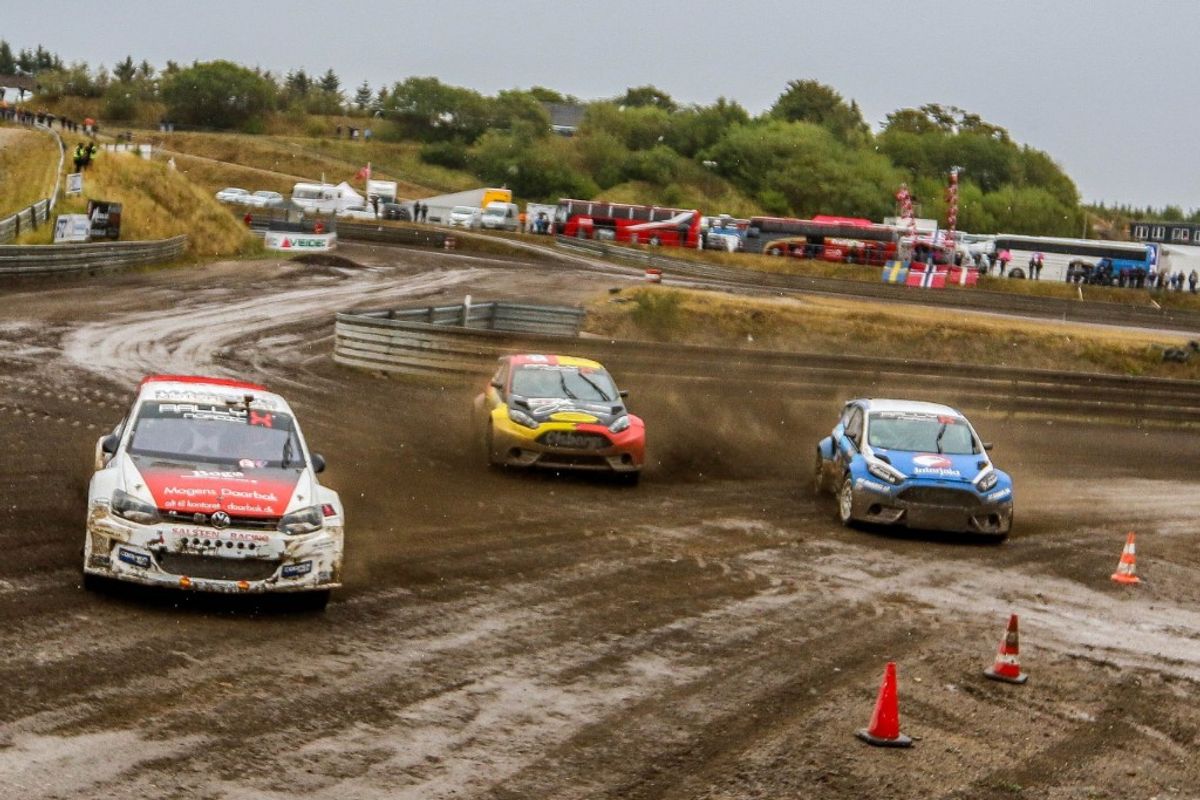 Ulrik Linnemann fought back to take a famous RallyX Nordic presented by Cooper Tires victory at Nysum in front of his home supporters after prevailing in a thrilling wet Supercar final over Oliver Eriksson.

The Danish driver – making his RallyX Nordic debut this weekend – initially finished second on the road to Eriksson but when the Olsbergs MSE driver was penalised with a five-second penalty for clipping a track marker on the exit of the joker, Linnemann was promoted to victory.

It was an unexpectedly positive conclusion to an otherwise eventful day for Linnemann and his team after a broken gearbox in Q1 resulted in him failing to even make the start of Q2 and Q3. However, after the team successfully repaired his Volkswagen Polo in time for the semi-finals, Linnemann belied his lack of track running to qualify through to the final.

Once there, a spectacular start that took him from sixth into the lead at turn one put him right in the hunt for victory as the onset of rain in the latter stages of race day helped to level the playing field for his epic comeback charge.

As such, though this was the first time the Dane had raced at Nysum in a Supercar, the intimate knowledge of his local track proved critical as he kept his cool in tricky wet conditions while his rivals hit various problems.

Indeed, victory could have easily gone one of five ways in what proved to be an action-packed five lap final dash. Eriksson looked set for his first victory of the season even after surviving a high-speed brush with Thomas Bryntesson as they disputed track position on the penultimate lap.

With Bryntesson and Eriksson running side-by-side on the exit of the latter's Joker, contact as the pair landed off the jump sent Bryntesson sideways across the bumper of his rival and into a spin.

While Eriksson controlled his Ford Fiesta to keep it pointing in the right direction, his initial joy at taking the chequered flag proved to be short-lived when race direction later ruled his exit from the Joker wasn’t lawful and handed him the penalty that ultimately left him behind Linnemann.

Their misfortune could have played into the hands of Oliver Solberg but for the championship leader suffering technical issues coming into the final lap, demoting him to fifth place.

As drama unfolded around him, Philip Gehrman stayed out of trouble to clinch his second podium result of the year in the Eklund Motorsport VW Beetle, ahead of the recovering Bryntesson and Solberg. Ola Froshaug collected points for sixth but failed to finish.

Despite missing the podium, Solberg and Bryntesson are now tied at the top of the overall standings with 96 points. In what could prove crucial at the end of the season, Solberg lost points to Bryntesson in the semi-final after he was judged to have overtaken his rival outside the track limits in a dramatic final corner lunge and demoted behind the Norwegian on the timesheets as punishment.

Meanwhile, Eriksson's second straight podium of the season has seen him close the gap to Solberg and Bryntesson to ten points with two rounds of the season remaining.

Ulrik Linnemann, commented: “I can’t describe just how happy I am! My gearbox broke in Q1 and we only just fixed it in time for the semi-finals so to win the final is amazing. I am happy I know this track very well because it helped me a lot, especially in the rain. The main target was to get into the final and to try and get the podium, so with the win... I just cannot describe it. I am going to celebrate with my family and the team, that was such a great job from them today.”

Ian Davies, RallyX Nordic Series Manager, said: "The dedicated Danish fans have been treated to a truly memorable day of RallyX Nordic competition and rewarded with a very deserving winner in Ulrik Linnemann. His zero to hero story is a true testament to a RallyX Nordic format that ensures every driver can still be in with a shot of victory regardless of what has happened earlier in the day. Moreover, the championship fight is taking shape nicely between Oliver Solberg, Thomas Bryntesson and increasingly Oliver Eriksson - with only two rounds remaining it is anyone’s guess who will come away with the big prize. We now look forward to our inaugural visit to Finland and the Kouvola track on 25-26 August.”