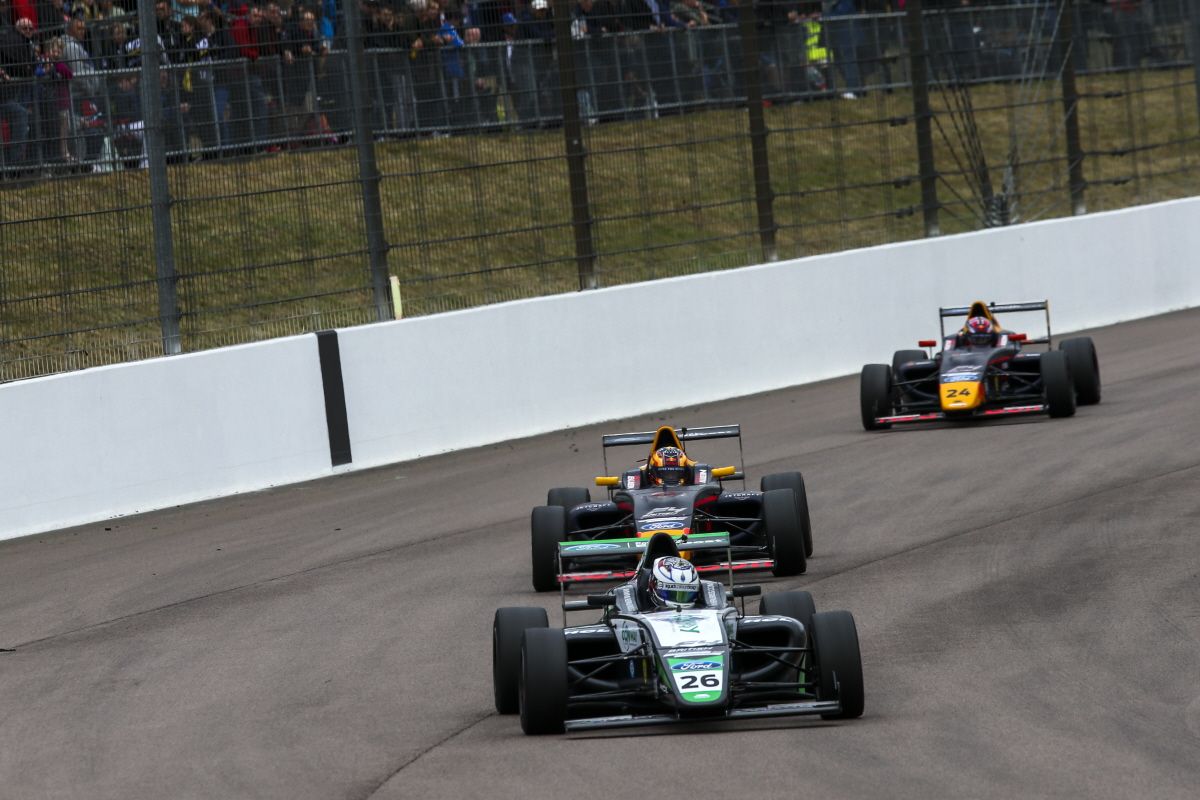 Two more podium results at Rockingham in Northamptonshire over the weekend, 11th/12th August, enabled Double R Racing’s Kiern Jewiss to re-open a significant lead of 45 points in the battle for the 2018 F4 British Championship certified by FIA powered by Ford title.

Combined with some missed opportunities for his main championship rivals, a series of all-round professional performances from the Maidstone 16-year-old during rounds 19, 20 and 21 of the campaign delivered a strong outcome to the seventh British F4 race meeting of the year.

Paavo Tonteri encountered some mixed fortunes, not least an enforced retirement from the final race of the weekend on Sunday afternoon after making unfortunate contact with the concrete wall on the Oval banking at the 1.94-mile International Super Sportscar Circuit. Rookie Cup podiums in races one and two, though, consolidated third place in the class championship.

Mexican youngster Sebastian Alvarez took points finishes in rounds 20 and 21 to climb into the overall championship top 12, and his top 10 result in the third and final race also marked a season-best second place in the Rookie Cup.

“Rockingham wasn’t the smoothest weekend for us on the whole, but to come away with two more podiums for Kiern and an increased championship lead is fantastic”, reflected Anthony Hieatt, Double R Racing team principal, “We’ve taken a lot of points away and with some of our main rivals losing a bit of ground, we needed to maximise everything we could.

“Paavo was unlucky in the final race making contact with the wall, it’s easily done when you’re edged slightly offline there, but he’s maintained fifth in the championship and took a couple more Rookie podiums. Sebastian had more than his share of misfortune as well this weekend, but battled well and finishing second in the Rookies in the last race was good.”

Determined Jewiss racks up the points again in Rds 19, 20 and 21
The battle for pole position in qualifying was predictably close, Jewiss only just missing out on the top spot on the grid for round 19 by a mere 0.1 seconds with a lap of 1m18.847 seconds (88.57mph) securing third fastest. Tonteri qualified fifth, third quickest Rookie, with a time less than 0.2 seconds shy of Jewiss’ while Alvarez – fourth best Rookie – made it all three Double R cars in the top 10

Round 19 on Saturday afternoon didn’t get off to the best of starts for all three team-mates, Jewiss was edged to fourth after a tight battle with Dennis Hauger and he was then nudged back to fifth place mid-lap after a late dive from Ayrton Simmons at Tarzan Hairpin.

Despite running close behind Simmons for the remainder of the 15-lap encounter, Jewiss had to settle for fifth but the championship points were vital. Tonteri stayed seventh until lap seven when Johnathan Hoggard went by, and the Finn was then shuffled back to ninth on lap nine where he went on to conclude the race – third in the Rookie class.

Mounting a recovery drive from the back after a moment on lap one, Alvarez passed Lucca Allen on lap four and after closing on Jamie Sharp the Mexican moved ahead on the seventh tour. Dropping back behind his rival the next time around, Alvarez climbed into the top 12 again on lap 10 and then took 11th place where he remained to the flag.

From third on the grid in the first of Sunday’s two races, round 20, Jewiss held station under serious pressure into Turn One and then managed to slice his way into second at Deene Hairpin following a tight three-way tussle with Simmons and Sebastian Priaulx.

As a result of another incident further around the lap, the Safety Car was then deployed on the third tour and action resumed a couple of laps later. Thereafter, Jewiss remained second for the duration to make a welcome return to the podium.

Tonteri slipped a couple of places from fifth to seventh on the first lap, but after the cautionary period he pressured and then successfully challenged for sixth at Deene on lap six. As with Jewiss, the second half of the race was steady for Tonteri where he remained sixth, third Rookie again.

Alvarez experienced another trying first lap, dropping to the tail of the field and some 10 seconds shy of the pack after an excursion. The Safety Car, though, did enable him to latch back on to the group and when racing resumed he held 10th place. Managing to take ninth spot on the penultimate tour, the result delivered his first outright championship points of the weekend.

Round 21 later in the afternoon began with Tonteri seventh on the grid, Alvarez ninth and Jewiss down in 12th position. The points leader had qualified second, but a 10 place grid penalty was enforced by officials relating to the race two skirmish with Simmons and Priaulx.

Tonteri made a great start to the encounter, threading his way through the scene of a dramatic tangle between Arden team-mates Jack Doohan and Dennis Hauger at Deene Hairpin to climb into the top four. Alvarez too profited from the chaos and smartly moved up into sixth, although he was then shuffled back to eighth at Tarzan after being tagged and forced wide.

Unlike his team-mates, Jewiss was somewhat delayed in the aftermath of the incident at the second corner but still managed to move up into the top 10. Passing Alvarez on lap two and Josh Skelton on lap four, Jewiss continued his rise and at the end of the fifth tour he profited from a small error by Tonteri which led to the Finn tagging the outside wall on the Oval banking.

Resulting in an instantaneous, and highly frustrating, retirement for Tonteri, Jewiss moved up into the top five prior to the emergence of the Safety Car with Alvarez holding seventh. After the re-start on lap nine, though, a spin for Alvarez after more contact – this time at Deene – dropped him back to 11th on the road but this became 10th in the final classification due to a time penalty for a rival.

Jewiss, in typical style, could sense the possibility of a podium and he wasted no time in trying to make silverware increasingly likely by taking fourth at Deene straight after the resumption and then closing on third placed Simmons.

Swarming all over his ultra-defensive rival lap after lap, Jewiss managed to force the slightest error from Simmons out of Brook Chicane on the 14th and final tour to seal a richly deserved podium return by just 0.176 seconds on the drag to the line.

Knockhill in Scotland will welcome the British F4 contingent for rounds 22, 23 and 24 of the season just a fortnight from now, over the weekend 25th/26th August.