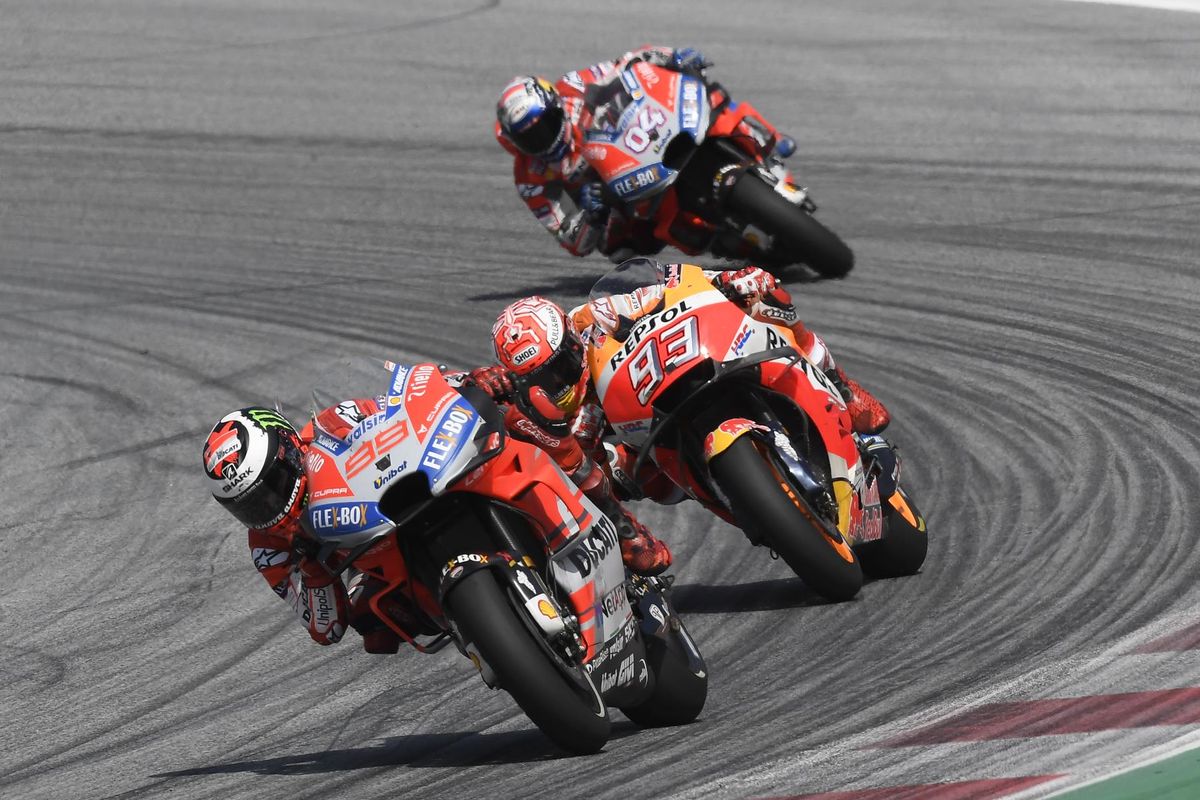 Jorge Lorenzo took the victory in the Austrian Grand Prix, round 11 of the MotoGP World Championship, which was held  at the Red Bull Ring circuit near Zeltweg in Styria. The rider from Mallorca, who started from the front row of the grid following third place in qualifying, opted to begin the race with ‘soft’ tyres both front and rear, and after leading over the line at the end of the opening lap, he was then passed by Marquez, whom he followed until lap 18 together with Dovizioso. After taking back the lead of the race on the next lap, Jorge battled it out with the Honda rider until the end, crossing the line with an advantage of just 130 thousandths of a second. Thanks to the win, Jorge Lorenzo moves into third place in the Riders’ standings with 130 points, followed by his team-mate Dovizioso (129 points). Ducati also took its third successive win at the Red Bull Ring since MotoGP returned to the Austrian circuit (2016 Iannone, 2017 Dovizioso and 2018 Lorenzo).

It was a good race for Andrea Dovizioso, who took the chequered flag in third place. The Ducati Team’s rider from Romagna, who yesterday qualified second on the front row of the grid, chose both ‘medium’ front and rear tyres for the race. Dovi remained in the leading group for 18 laps but, after making a small mistake at Turn 1, he had to slow his pace slightly to finish the Austrian GP in third place, 1.656s away from his team-mate. Thanks to this third place today, Dovizioso is the second rider in Ducati’s MotoGP history with the most podiums (24), behind Casey Stoner.

The next round of the championship will be the British Grand Prix, scheduled for the Silverstone circuit from 24th to 26th August.

Jorge Lorenzo (Ducati Team #99) - 1st
“It was an incredible race, maybe one of the best of my career, quite simply spectacular! Winning with Ducati on this circuit, where I had never won before, after a close quarters battle with Marquez, has a really special taste. Before the race I had thought about which strategy to use, and I decided to do like Brno, administering the tyre wear well and then attacking in the final part of the race, especially because I was one of the few riders who had chosen ‘soft’ tyres and my riding style allowed me to conserve them until the end. When I found myself fighting against Marquez I knew that it was going to be difficult to pass him, so I decided to improvise by making the best use of the Desmosedici GP’s acceleration and it worked perfectly. Now we’re third in the championship standings, but above all I’m proud and very pleased with the way we’re working because the feeling with the bike is better and better all the time and I believe we can fight for the win in many other races. Now let’s just enjoy this moment with all the team and I’m also very happy for them.”

Andrea Dovizioso (Ducati Team #04) - 3rd
“At the start of the race unfortunately I was never able to get in amongst the battle for first place, because I couldn’t pass Jorge even though at that moment I was quicker than him, but to do that I used up the rear tyre too much, it dropped off a lot ten laps from the end, and this affected my race a bit. From that point onwards, I wasn’t able to do much because I couldn’t link up the corners very well. Pity, because we were pretty good under braking, but every race has its own story and we must always try and interpret the tyres in the best possible way.”

Luigi Dall’Igna (Ducati Corse General Manager)
“I’m pleased, because both of our riders were always competitive throughout the entire weekend here at the Red Bull Ring, both in practice and in the race and in all weather conditions. Today, Jorge was truly awesome and he impressed me in many aspects. All year he’s been braking really hard and you can see that he’s improved a lot from this point of view. Pity about Andrea, who for sure could have aimed a lot higher, but a podium is in any case always an excellent result. I also want to congratulate Marquez, because he really gave us a hard time on this track, which on paper was more favourable for us. Well done to him.”