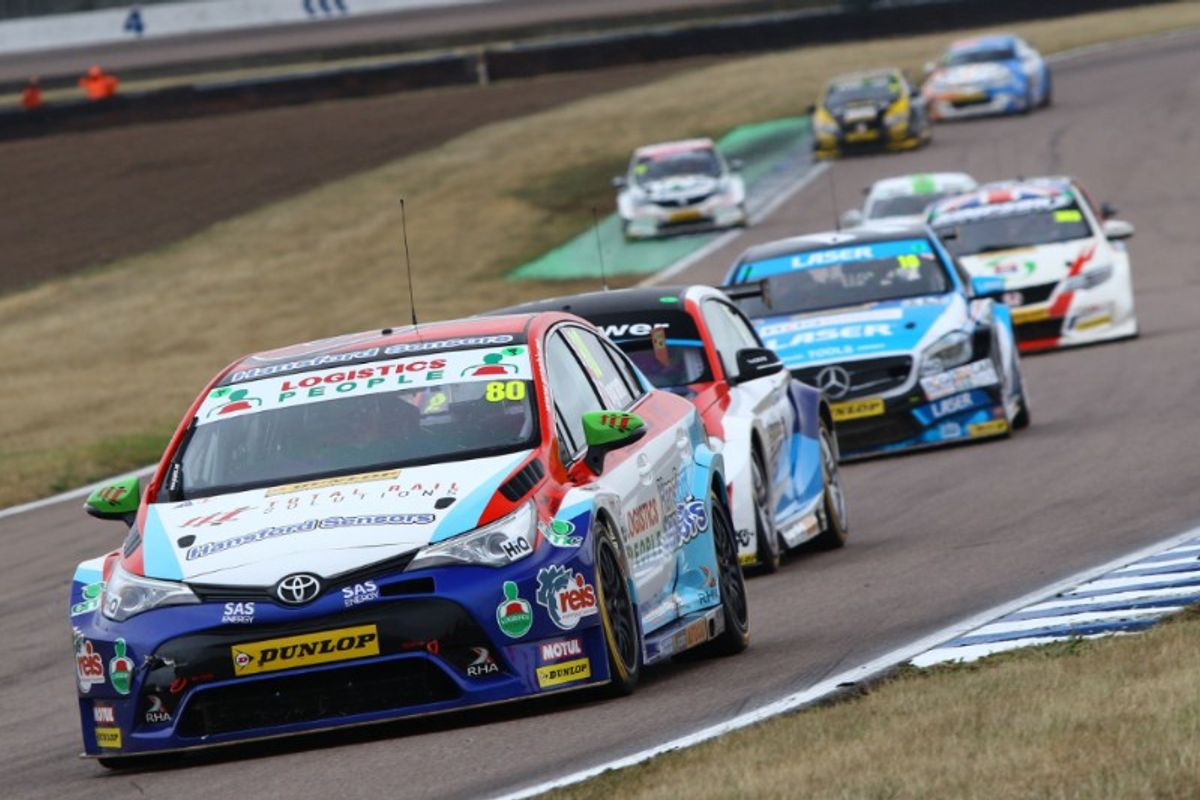 For the second event in succession, Tom Ingram blasted his Speedworks Motorsport Toyota Avensis from virtually the back of the grid to the Dunlop MSA British Touring Car Championship podium at Rockingham last weekend (11/12 August), in so doing keeping himself firmly in contention for the most coveted crown in UK motorsport.

The talented young Bucks ace arrived at Rockingham – scene of an emotional rostrum breakthrough three years ago – at the summit of the standings in what is commonly regarded as the world’s premier and most fiercely-disputed tin-top series. Success in the BTCC, however, is a double-edged sword, as the championship leader must carry 75kg of ballast on-board for qualifying and race one – a significant handicap in such an ultra-competitive field.

That much was evidenced in qualifying, where the top 28 drivers in the high-calibre, 31-strong entry – composed of some of the very best touring car protagonists on the planet – were blanketed by less than a second. Handling the extra weight in his stride, Ingram lined up 13th on the starting grid, right behind chief title rival Colin Turkington and comfortably clear of some of his other key adversaries – and by dint of carefully navigating his way past a first corner mêlée in the curtain-raiser, he immediately gained four places to run ninth.

Following a brief safety car interlude, the 24-year-old swiftly despatched multiple champions Turkington and Jason Plato, thereafter producing an inch-perfect defence to keep the former at bay. He was set to extend his advantage in the overall classification when the Toyota suddenly coasted to a halt on the last lap due to throttle failure, costing Ingram nine points and consigning him to a lowly 27th on the grid for race two – a double blow.

The Speedworks crew toiled tirelessly to rectify the issue before the next contest, where on a tricky wet-but-drying track surface, the reigning BTCC Independents’ Champion put on a scintillating show for the live ITV4 television cameras and awestruck crowds. Having sensationally vaulted up to 16th on the opening tour – just outside of the points-paying positions – he was into the top ten by lap eight and outpacing everybody else on the circuit.

After snatching two spots for the price of one on lap 12 with a supremely committed move, Ingram scythed past Turkington for fifth, Mike Bushell for fourth and – with just two laps remaining – Senna Proctor for third, going on to take the chequered flag less than a second behind race one-winner Adam Morgan in a carbon-copy of his Snetterton heroics from a fortnight earlier.

The three-time Ginetta Champion and former British Karting Champion snared an additional point for posting the race’s fastest lap, and – notwithstanding the three-fold challenge of 57kg of ballast, the less favourable hard-compound tyres and intermittent drizzle – he completed his day’s work with a solid fifth place in the finale, less than two tenths-of-a-second adrift of an eighth podium of the 2018 campaign.

That means Ingram will travel to Knockhill in Scotland on 25/26 August sitting a scant four points shy of the top of the Drivers’ table and having strengthened his grip on the Independents’ Trophy. Speedworks have similarly increased their margin in the battle for Independent Teams’ glory, while closing in on fourth position in the prestigious Teams’ ranking.

“What can I say? Another superlative performance by Tom in races two and three after a rotten race one,” praised the Northwich, Cheshire-based outfit’s Team Principal, Christian Dick. “It was almost like being in ‘Groundhog Day’! Just as at Snetterton, his effort behind the wheel – and that of all the Speedworks boys in the pit garage – transformed what could have been a disastrous, points-haemorrhaging weekend into a successful and rewarding one that keeps our title bid very much intact. I’m immensely proud of everybody involved.

“What happened in race one after a flawless drive was hugely frustrating, but Tom’s extraordinary charge through the field in race two – for the second weekend in succession – was an absolute masterclass. To my mind – and doubtless in the eyes of many observers – that was the drive of a champion in waiting.

“Tom’s performances throughout this season prove he is more than ready to fight for British motorsport’s biggest prize – and over the remaining three events, that is exactly what we intend to do.”

“Well, that was another rollercoaster ride of a weekend!” echoed KX Akademy graduate and MSA Academy member Ingram. “Rockingham has been the scene of a few memorable moments for me in the past, and it certainly delivered again this year.

“We worked hard during practice to establish a good set-up in both dry and wet conditions, as we knew the forecast for Sunday was mixed. The ballast inevitably counted against us in qualifying, but to line up just one place behind Colin and well ahead of many of our other major rivals was a solid outcome, and we were on-course to bag a decent points haul in race one until the throttle issue intervened. Having kept out of trouble throughout and done everything right, to be denied a finish so close to the end was particularly cruel.

“Race two, by contrast, was incredible – really, really cool and so much fun. Starting 27th, we were aware we would have to throw caution to the wind a bit to avoid conceding even more ground, and we had showed at Snetterton that we can come through from the back of the pack – although I honestly never expected to achieve the same result again. That proves just how good a car the Avensis is and what an awesome effort the Speedworks boys are putting in weekend-in, weekend-out.

“We didn’t know what to expect over the first few laps, but I love conditions like that – ever since we couldn’t afford to buy wet tyres in karting and I had to keep going round on slicks in the rain, which taught me so much about car control.

“For the second weekend running now, we’ve had to do the same thing and all credit to the Speedworks boys – we were up against it after race one and only just got the car out in time for race two, but we pulled it right back. There’s definitely a lesson there – don’t let yourself get beaten up, don’t let your head go down and look at the positives in any situation.

“With the weight back on-board, race three was always going to be about trying to hold position and bag as many points as possible, so to come away with a fifth-place finish was a job well done and leaves us still very much in the fight. Knockhill next will be an interesting one. Historically, it’s a track that tends to favour rear wheel-drive cars, but we didn’t fare too badly at Croft a couple of months ago – and ultimately, we do like a challenge...”