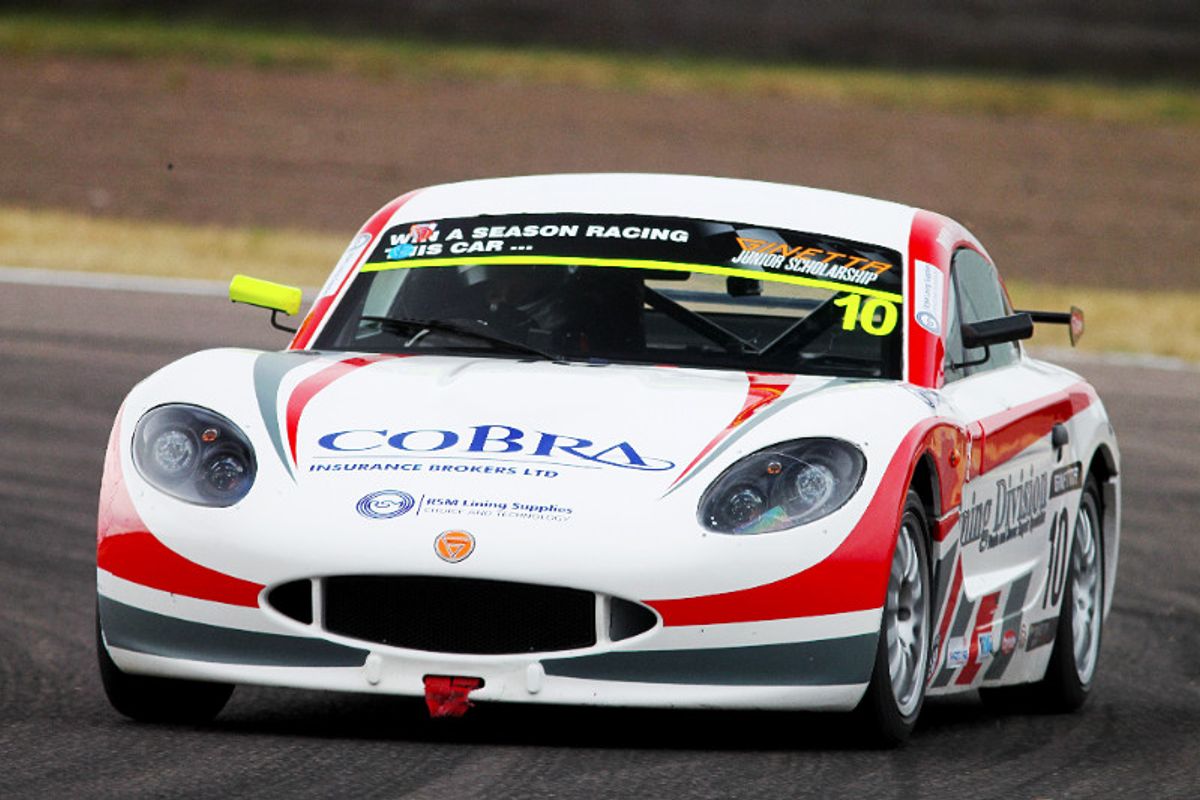 The Richardson Racing team secured a seventh victory of the season in the latest rounds of the Ginetta Junior Championship at Rockingham.

The Corby-based team made the short trip to its home circuit eager to push for strong results with an expanded five car line-up after Will Martin joined regular quartet Luke Browning, James Taylor, Matt Luff and Emily Linscott.

Friday testing saw the drivers given the chance to take to the track in both dry and damp conditions, with Luke leading the way with the second quickest time and James just outside the top ten in eleventh.

Matt and Emily would end up 13th and 15th despite showing impressive pace in the damp second session – where both lapped inside the top seven – whilst newcomer Will ended up 19th on the combined times after an incident in the second session cost him valuable track time.

Luke was again the best placed of the quintet in qualifying as he secured third on the grid, with James lining up ninth, Matt 14th, Emily 18th and Will 19th for the opening race of the weekend.

It would prove to be arguably the toughest race of the season for the team however with Luke forced out early with damage sustained as the field concertinaed up going into the Deene Hairpin for the first time and both Matt and Will also failing to make it to the finish.

In Matt’s case, a broken throttle cable robbed him of a potential top ten finish whilst a brush with the fearsome Rockingham wall was enough to damage the right rear wheel on Will’s car and put him into retirement.

It left James to lead the team’s challenge in seventh spot, whilst Emily crossed the line in 14th having fought back well from a moment on the third lap that dropped her to the back of the field and left her with an ill-handling car.

Keen to put the disappointment of race one in the past, the second race on Saturday evening would provide more reason for cheer, with Luke and James both running right at the sharp end of the field.

Having started on pole, Luke was shuffled back to third on the opening lap but showed strong pace throughout as he eventually crossed the line in second spot with James running eighth before he was able to benefit from a clash of drivers ahead to vault up to third with three laps to go – a place he would then maintain to the finish.

From 13th on the grid, Matt missed out on a place in the top ten by just three tenths of a second at the finish, whilst Will took his first finish for the team in 15th. A 16th place for Emily was an unrepresentative result after she lost ground when tipped into a spin on the opening lap.

The final race of the weekend on Sunday brought with it the added challenge of rain after a heavy shower hit the circuit just before the start.

Undeterred, Luke made the ideal start from second on the grid to take the lead on the run to Deene for the first time – a position he would then hold right through to the end of the race for his seventh victory of the year.

Behind, a solid run from James saw him cross the line in fifth spot before a penalty for one of the drivers ahead promoted him into fourth, with the rookie having fought back well from a mid-race spin after contact at the Deene hairpin.

Will, Matt and Emily meanwhile took the flag in 13th, 14th and 15th spot in the challenging conditions; the latter two both being forced to battle with a trip off track and visibility issues throughout the race.

Will Martin, #10 (Battle, East Sussex), said
“It’s been a really good weekend and it has been great getting to know the team. It has been a big learning curve at the same time in terms of learning how the team does things and I’m happy to come back from the disappointment of race one with two solid finishes to my name.

“I was a bit worried about the rain race three after my earlier incident with the wall but I feel I drove well in those conditions and that was probably the highlight of my weekend. I have to say thanks to the team for their hard work and I’m more sure than ever that joining them has been the right move for me. I’m sure we can get some good results together before the end of the year.”

Luke Browning, #11 (Kingsley, Cheshire), said
“It has been an up and down for me but I’m delighted that it has ended on a high. The first race yesterday was really unlucky and what happened was one of those incidents that you see all the time on the opening lap going into that corner. We came back well from that to grab a podium in race two, and then won in really tricky conditions in race three.

“It was really difficult to be leading the way because you didn’t know what conditions you were going to face every lap and the guys behind could use me as the benchmark to see where they needed to go. I managed to get a gap over Louis and then dropped the hammer and pushed hard so to end with a victory is great.”

James Taylor, #66 (Rotherham, Yorkshire), said
“It’s been another strong weekend for me and I’m really pleased. The first race I spent a bit too long stuck behind Del Sarte which allowed the cars ahead to break away but seventh was some good points on the board. Then in race two, I could see it was going to kick off ahead and when it did, I was ready to take advantage.

“I was pleased to see the rain come before race three and felt I had a chance to push the leaders for a strong result, and I’m pleased to come away from it with P4 considering that I got taken out at turn two mid-way through and dropped back to eighth. I showed good pace and it just boosts my confidence even more going into the final three rounds.”

Matt Luff, #72 (Romford, Essex), said
“We showed good pace in the mixed conditions in Friday practice but qualifying was tough and we had work to do in the races. It looked like we could get a top ten from race one before the throttle issue, which was just one of those unfortunate things that can happen.

“I was happy with the way the second race was going until the last lap when I lost a few places running wide at Tarzan and we showed really strong pace in the early stages of race three. Unfortunately I lost out due to a trip across the grass at the chicane which prevented me from getting the kind of result I deserved and its another weekend where I don’t feel the results reflect my performance.”

Emily Linscott, #99 (Langdon Hills, Essex), said
“It’s a weekend that could certainly have gone better for me and I was hoping to come away from here with some stronger results. However, it’s important for me to learn from difficult meetings like this to improve in the future.

“It was unfortunate in the first two races that there were incidents on track that cost me time and the third race was very challenging in the conditions and I was struggling for visibility from the early laps.

“Things haven’t gone my way in the races and I’ll be chasing some stronger results when we go to Knockhill next time out.”