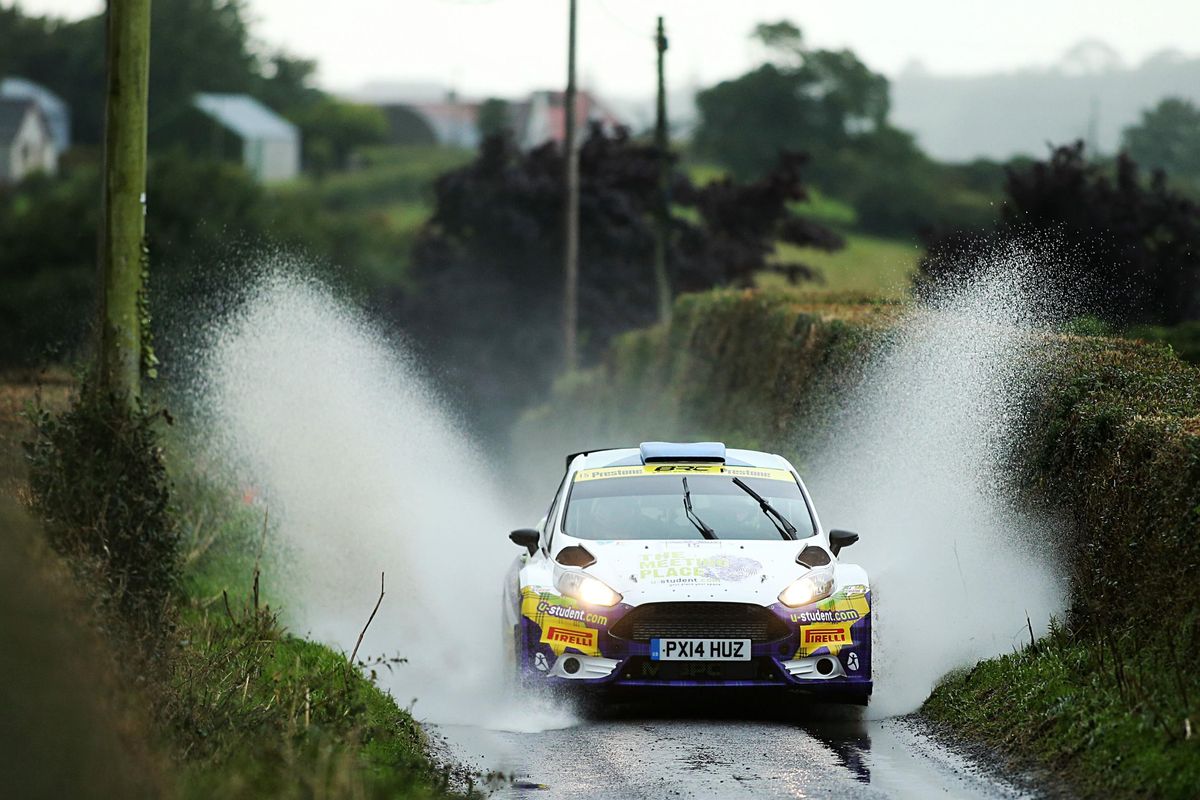 The MSA British Rally Championship travels across the Irish Sea to Northern Ireland for the John Mulholland Motors Ulster Rally (17-18 August). The  British championship crews will face two demanding days on the fast and bumpy lanes as the BRC’s 60th anniversary season reaches its halfway point. New for 2018 is the location for the Ulster Rally as the town of Antrim plays host to the 100-mile event.

Current series leaders, Matt Edwards and Darren Garrod are on an unbeaten run after clinching the opening two rounds of the series to lead the standings coming into the Ulster Rally. The Welsh M-Sport crew keep rewriting the record books in their Pirelli-backed Ford Fiesta R5 as they broke their BRC duck on the Pirelli Rally and backed that up with their first Tarmac win together in Ypres. Now the trailblazers will be looking for their maiden victory in Northern Ireland – but chasing them will be a whole host of homegrown stars.

Defending champions Keith Cronin and Mikie Galvin mastered the mixed conditions to dominate the Ulster last year. For 2018, the Cork-based driver will be pushing hard hard to give the Michelin-shod Hyundai i20 R5 its first win in the BRC. The Irish pairing came close to topping the results last time out in Belgium, but a final stage puncture denied the 2016 Irish Tarmac champions the spoils. With the bit between their teeth, Cronin will be on the charge to close the 20-point gap to Edwards in the standings.

Marty McCormack and David Moynihan finished third on the Ulster last season in their Kumho-shod Skoda Fabia R5. McCormack from Draperstown lacks no commitment on the challenging, bumpy roads and will be eager to bag another podium in 2018. Indeed, he would desperately love to capture his first BRC win in front of his home fans.

Fellow Ulsterman Jonny Greer won the recent Down Rally – a perfect warm-up for this weekend. Greer from Belfast is a real asphalt specialist and thrives on the Northern Irelands roads with two podiums in the last two years. Along with Scottish co-driver Kirsty Riddick, Greer will hope to add another podium to that impressive record.

Scotsman Alex Laffey and navigator Patrick Walsh have enjoyed a strong start to the season, as fifth on the Pirelli and fourth in Ypres catapulted them to third in the standings. The M-Sport pairing are gathering momentum and would dearly love to claim a breakthrough podium to cement their progress – while fellow Ford Fiesta R5 driver Lawrence Whyte continues his BRC education as he strives for his first top five result in Britain’s premier rallying series.

CA1 Sport will once again field a two-car effort, with Scottish star David Bogie and Englishman Rhys Yates leading the charge. With Irishman John Rowan on the notes, Bogie loves competing on the Irish roads and in their Fabia R5, they will look to repeat or go one better on their fine second in Belgium last time out. Yates endured a tough Ypres Rally in his Skoda with a few uncharacteristic offs and an unwell Elliott Edmondson in the co-drivers seat – ultimately causing the English pair to retire early. With front-running pace expected, Yates will endeavour to bring himself back into title contention.

Junior BRC crews hope for luck of the Irish for championship aspirations
The battle for two-wheel-drive honours will be every bit as competitive as at the front of the field, as the under 26-year-olds aim to stamp their authority at the midway point in the season.

Series leader James Williams produced a textbook drive on the Ypres Rally in his Vauxhall ADAM R2 and come to Northern Ireland full of confidence as he bids to extend his championship lead. Out to stop Williams will be round one winner, Norway’s Steve Rokland in a Peugeot 208 R2.

The Emerald Isle is well-known for producing rallying superstars, and the Junior BRC in 2018 is a real hotbed for emerging talent.

James Wilson from Armagh has been one of the revelations of the season as he took his first BRC podium in only his second start in his 208 R2 to put him on the right foot for his home event. Josh McErlean (Kilrea) will also be a dark horse for success on local roads as the Ford Fiesta R2T driver similarly claimed his first podium in Ypres.

William Creighton (Moira) and Marty Gallagher (Letterkenny) – both in Peugeot 208s – are previous JBRC round winners and will be pushing hard to stand on the top step once again and get their season back on-track after Ypres disappointment, while Kevin Horgan from Cork will be keen to use the fifth place achieved last time out to springboard up the order in his Skoda Fabia R2.

Cadets poised for mid-season showdown
With Ypres winner and series leader Bart Lang absent from Northern Ireland, the door has been left wide open for another driver to step into the limelight.
Johnnie Mulholland (Randalstown) will look to impress on home soil after finishing a fine third in Belgium as he hopes to take the challenge to the overseas contingent of Jordan Reynolds and Finlay Retson.

“The event’s fast and challenging roads are a real eye-opener and require 100 per cent concentration and commitment. Matt Edwards and Darren Garrod are on a real run and will be keen to make it a hat-trick. However, with a new base in Antrim for 2018, the stages with be uncharted territory for most of the competitors so local Irish rallying knowledge will be a massive advantage – especially when the weather changes. Messrs Cronin, McCormack and Greer will have points to prove and will be eager to stop the Edwards runaway train.”

Brand Manager for Prestone, Stephanie Hickford said: ”The 60th anniversary celebrations are certainly stepping up a gear, as we head to Ulster for the halfway point of the series.

“As always, Prestone is hugely looking forward to the event, and members of the team will be stage side throughout the two days to cheer on the drivers, whilst also getting to know the Northern Ireland supporters.

“Our brand ambassadors Henry Catchpole and Luke Barry will be capturing exciting footage and interviewing the nation’s favourite rally legends. Keep an eye on our social media channels for all the latest news and action!”

The John Mulholland Motors Ulster Rally is open to the public and free of charge to spectate. The Ceremonial Start will take place at the Castle Gardens on Friday lunchtime before 11 timed special stages across the two days. During the event, the cars will be serviced in the Central Car Park in Antrim and spectators will get the chance to get up close to the cars and stars at regroups in Ballyclare, Randalstown and Antrim before crews return to the Castle Gardens to spray the champagne on Saturday evening.