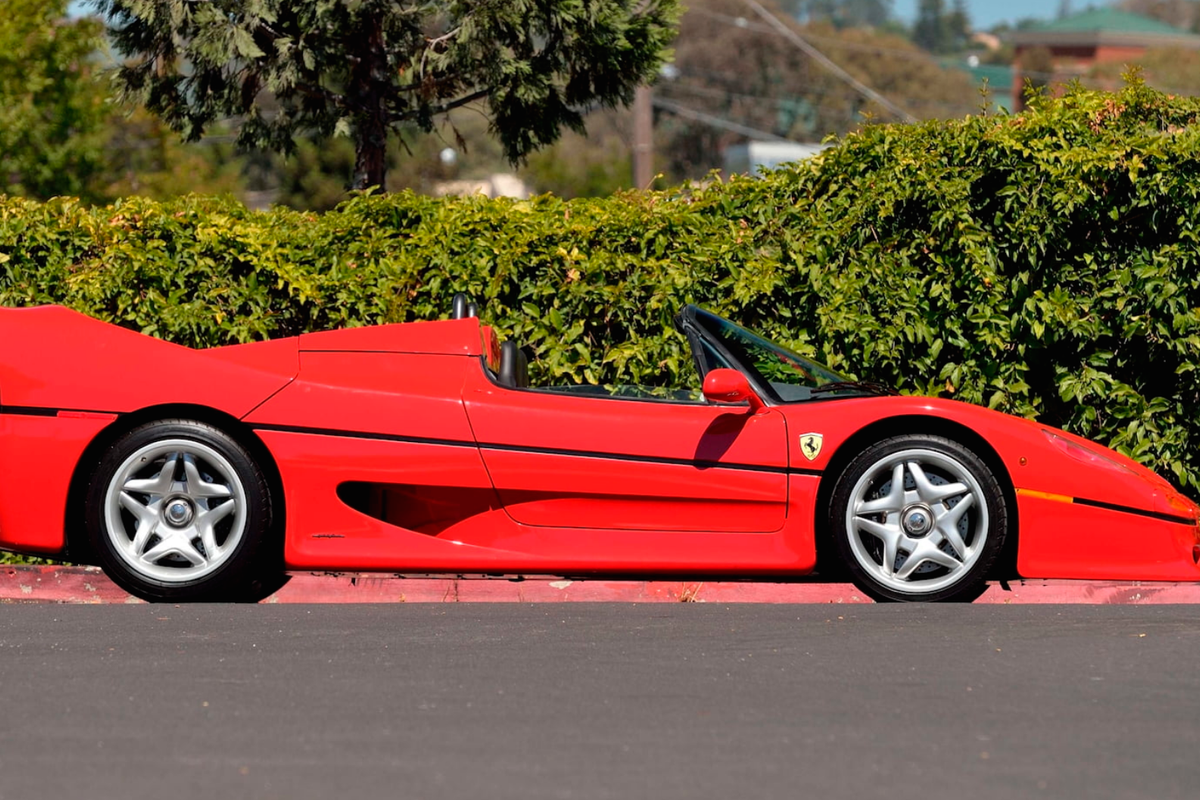 When the 50th Anniversary Ferrari F50 was publicized in 1995 at the IAA Frankfurt Auto Show, this example was the special car on display. This F50 is No. 2 of 349 built and has been certified by Ferrari Classiche. Many noticed it was a bit early for an anniversary celebration, but Ferrari proclaimed that only 349 would be built and that only 55 would be available to customers in the United States, at which point, no one seemed to care about the weird early introduction date. The reason publicly given for the odd production number had to do with a marketing ploy to, “…sell one less than we know we can sell.” Exclusivity card No. 1, maybe.

The reason behind the early release is a little forked, some saying it had to do with a world economy that was slumping, while others said it had to do with the new leasing program—by the time the lease was up, Ferrari would truly be, or at least closer to, a 50-year-old company. Adding to the difficulty of acquiring an F50, Ferrari only allotted 55 units for consumption in the United States and, mentioned before, all F50s were only available under a special two-year leasing program.

The idea behind the leasing program was solid: level the playing field for true Ferrari enthusiasts and thwart the investment flippers who turned the F40 into a $1 million car overnight. While it might have been a solid idea to separate the car guys from the money guys, engaging the Ferrari F50 Leasing Program was not for the financially faint of heart. The down payment was $240,000, followed by 24 monthly payments of $5,600 each, not including the taxes, fees and other associated monetary commitments. At the end of the lease, should the customer wish to buy the F50 outright, an additional fee of $150,000 was required. The cost of joining the exclusive club of actual F50 owners would hover around $524,400. Remember too, this was 1995, marking the F50 as one of the most expensive supercars ever.

This car is Serial No. 103114, Assembly No. 19963; it has covered a mere 3,363 miles from new. In 2016, this F50 underwent an extensive major servicing which included new fuel bladders. Originally delivered to well-known German Ferrari aficionado Michael Gabel, the car remained in Germany until 2017 when it was imported to the United States and federalized. When it was introduced, the F50 absolutely wowed the press and public alike with its futuristic shape and materials—the chassis is Cytec Aerospace carbon fiber, and extensive use of the material is evident throughout, reducing weight, increasing strength and adding a dash of F1 style. The 4.7L/520 HP V-12 engine is controlled by a Bosch Mototronic engine-management system and backed by a 6-speed manual transmission with the famous open-gate shifter. The staggered Speedline wheels are bolted to a 4-wheel independent suspension with electronic damper system and 4-wheel cross-drilled and ventilated disc brakes. Presented in Rosso Corsa, the car is complete with a soft top, build book, Ferrari Classiche Book and suitcase. As No. 2 of 349 cars built and one of the original debut show cars, the opportunity to acquire this particular F50 is truly unique. It's interesting to note that the F50 was the last 6-speed, open-topped, analog Ferrari supercar ever built, with later examples bringing F1 gearboxes and a battery of electronic devices to the program.