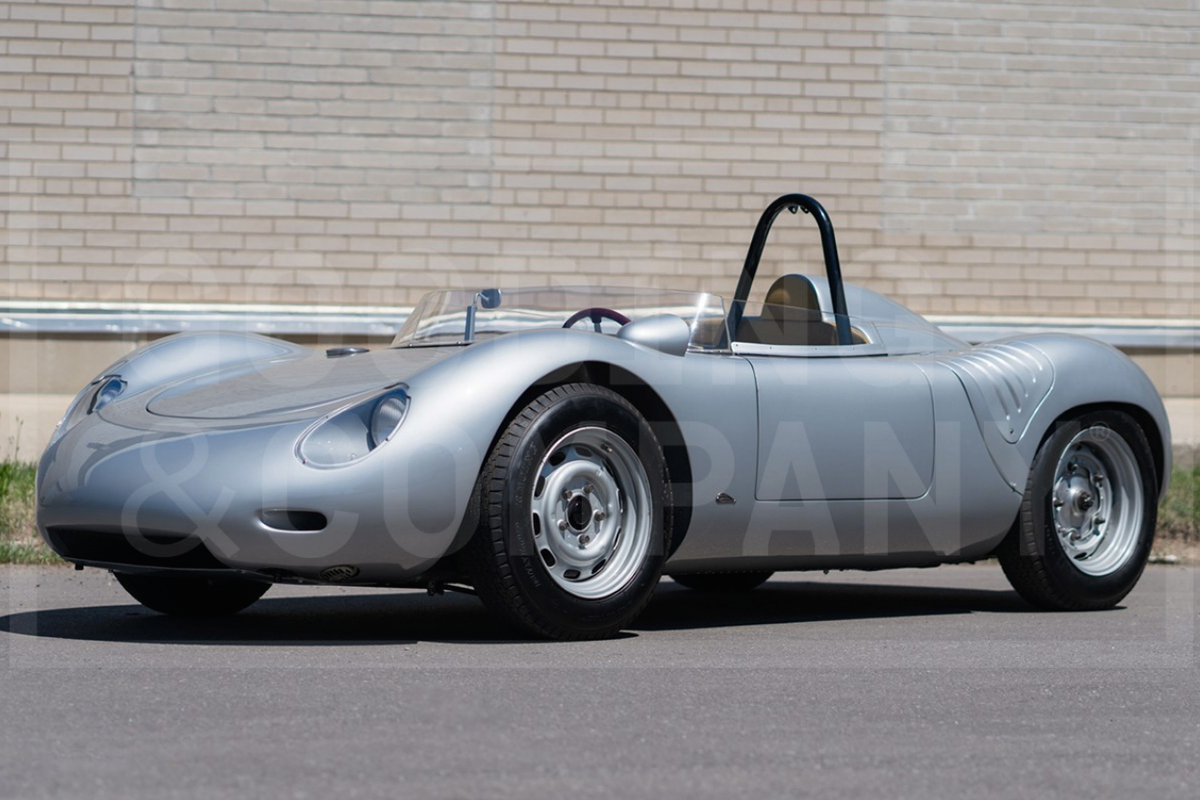 One of Only 34 Type 718 RSK Spyders Built
Sold New to Famed American Racing Driver Ed Hugus
Raced at the 1959 24 Hours of Le Mans in Distinctive “Lucybelle” Livery
Campaigned in SCCA Events and at the Pikes Peak International Hill Climb in the Early 1960s
One Owner Since 1994; Never Before Offered for Public Sale
Eligible for Numerous Events from Le Mans Classic to the Colorado Grand

THIS CAR
Following on the success of the Type 550 program, Porsche unveiled the latest evolution of its lightweight, four-cam Spyder in 1957. Internally designated as Type 718, the RSK replaced the 550 A, a model that dominated its class and furthered Porsche’s reputation as a manufacturer of innovative sports racing cars.

Visually, the RSK was more modern than its predecessor, with streamlined coachwork, faired-in headlamps, and lower aerodynamic drag. Beneath the alloy skin, the RSK benefited from thorough development; it offered significantly more power, better braking, and improved suspension.

In 1958, the RSK took the racing world by storm. The new Spyder trounced the competition, winning its class and finishing on the podium at Sebring, Le Mans, and the Targa Florio. The RSK’s most memorable performance took place at the 1959 Targa Florio, where a works-entered car won overall, leading Porsche’s 1-2-3 finish at the legendary Italian event.

With the RSK, Porsche had a true giant-killer and an ideal foundation for future success. Although Porsche built just 34 examples of its Type 718 RSK, this important model set the tone for decades of dominance at the height of international sports car racing.

Constructed at Werk I, Porsche’s dedicated racing shop, in March 1959, 718- 024 was built to the specifications of a privateer RSK and equipped with the improved Type 547/3 engine. According to factory records, it was originally supplied with engine no. 90216, transaxle no. 718-017, and Continental racing tires. Originally painted white with beige upholstery, the Spyder was sold new to famous American racing driver Ed Hugus.

Based in Pittsburgh, Pennsylvania, Hugus was a lifelong car enthusiast who established his own MG dealership in 1950. He joined the SCCA in 1951 and ran his first race the next year. Starting with Jaguar XK120s, Hugus developed his driving skills and soon graduated to faster machinery. By the late 1950s, he had made racing at the 24 Hours of Le Mans an annual tradition.

In 1957, he entered a Porsche 550 A, finished in white with thin blue stripes and “Lucybelle” painted on the front fender. Lucybelle was the nickname of Lucille Davis, a wealthy woman who financed and managed Hugus’ dealership. In 1958, he returned with a new 250 Testa Rossa, painted in the same distinctive livery and christened Lucybelle II. In 1959, Hugus ran this RSK as Lucybelle III, with thin blue stripes running the length of the car and a small heart painted on the tail.

Hugus’ co-driver for 1959 was Ernie Erickson from Chicago. A regular in the SCCA Midwest Region during the 1950s and ’60s, Erickson raced a variety of sports cars and earned the nickname “King of Wilmot” for his winning record at the Wilmot Hills circuit in Wisconsin.

Wearing race No. 37, Hugus and Erickson got off to a strong start and maintained a steady pace through the night. By the 19th hour, the RSK was the best-placed Porsche, running 1st in Class and 4th Overall, but it was forced to retire in the 20th hour with a broken crankshaft.

After Le Mans, 718-024 remained in Europe for several months. Before it was shipped to the US, Porsche borrowed the RSK for a special ceremony celebrating Edgar Barth, who had recently captured the 1959 European Hill Climb Championship.

Soon after its arrival in the US, the RSK was sold to Don Ives, a sports car enthusiast who had moved from Honolulu to Colorado. During 1960 and 1961, Mr. Ives actively raced the Porsche, most often campaigning it at the Continental Divide circuit between Denver and Colorado Springs. In 1962, Mr. Ives drove the RSK at the famous Pikes Peak International Hill Climb, recording a time of 16 minutes, 45 seconds; the next year he finished 4th Overall at Aspen Raceways.

In the late 1970s, William Franklin of Sonoita, Arizona, acquired 718-024, restored it, and raced it in vintage events including the Monterey Historic Automobile Races at Laguna Seca, where it appeared at least three times from 1978 to 1986. In the late 1980s, Mr. Franklin sold the RSK to noted collector and vintage racer Don Orosco of Pebble Beach, California. Dr. Greg Johnson of Irvine, California, was the car’s next owner, and he also campaigned the RSK in vintage events.

Since 1994, this important Porsche Spyder has been a fixture in a major private collection composed of the finest European sports and racing cars. In 1998, it was displayed at the Amelia Island Concours d’Elegance and was awarded the Road & Track Trophy. Since then, the Spyder has made few public appearances and has not been raced.

As presented today, 718-024 is equipped with an unnumbered four-cam engine and transaxle no. 718-048, originally supplied in an RS60. As the RSK has been kept in static storage for many years, it will require inspection and mechanical recommissioning prior to being returned to use. The sale includes an inventoried collection of various spare components; a list with photographs of the contents is available.

Widely regarded by Porsche enthusiasts as the most attractive of all the four-cam Spyder variants, the RSK is a magnificent vision of the ideal small-displacement sports racing car. Raced with success against much larger sports cars from Aston Martin, Ferrari, Jaguar, and Maserati, Porsche’s RSK was beloved by its drivers and feared by its rivals.

Chassis 718-024 presents as a stunning example of a four-cam Spyder and is held in high regard among knowledgeable marque specialists. Driven by acclaimed American racing driver Ed Hugus at the 1959 24 Hours of Le Mans, this RSK went on to compile an enviable competition record, racing in SCCA events and even at the Pikes Peak International Hill Climb during the early 1960s. Its impressive vintage racing pedigree, long-term ownership, and eligibility for leading historic events around the world make this a particularly attractive Porsche competition car.