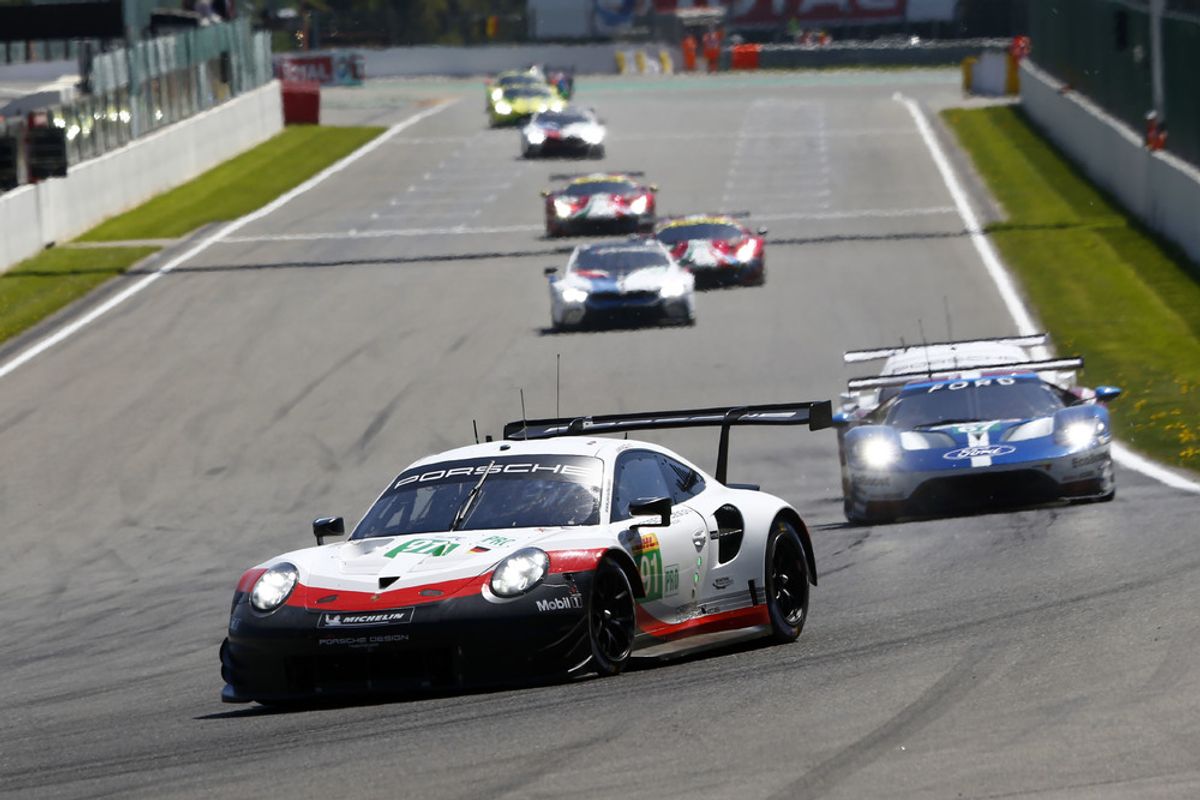 Silverstone hosts round three of the FIA World Sports Car Championship WEC on 19 August. After scoring a double victory at Le Mans, the Porsche GT Team travels to England leading the drivers’ and manufacturers’ classifications in the GTE-Pro class. A six-strong fleet of 510 hp Porsche 911 RSR will tackle the race on the 5.901-kilometre tradition-steeped circuit in the British Midlands: two in the GTE-Pro class and four in the GTE-Am class.

The race
In 2017, the latest generation Porsche 911 RSR celebrated its WEC debut at Silverstone. At last year’s season-opening race on the British circuit, the Porsche works drivers Richard Lietz (Austria) and Frédéric Makowiecki (France) promptly scored a podium spot, with the 2017 vice champions concluding the race in Great Britain on third. The Silverstone circuit hosted the first modern-day Formula 1 Grand Prix in 1950. Legendary corners such as Becketts, Copse and Stowe were carved out of the grounds of a former military airbase.

The Porsche GT Team drivers
Richard Lietz and Gianmaria Bruni tackle the six-hour race in the #91 car. Bruni from Italy won the WEC Silverstone race in 2012 and 2015, while Lietz crossed the finish line first there in 2014. The cockpit of the #92 Porsche 911 RSR is shared by Le Mans champions Kévin Estre from France and Michael Christensen from Denmark. After winning the world’s toughest endurance race earlier this year, the two drivers now lead the drivers’ classification in the GTE-Pro class. Porsche currently ranks first in the manufacturers’ classification.

The customer teams
Three customer squads field four more 911 RSR in the GTE-Am category. Porsche Junior Julien Andlauer (France), Christian Ried from Germany and Porsche Young Professional Matt Campbell (Australia) compete in the #77 car. Driving for Dempsey Proton Racing, the trio travels to Silverstone leading the drivers’ and team classification after scoring a class victory at Le Mans. Manning the sister car are Porsche Young Professional Matteo Cairoli (Italy), Khaled Al Qubaisi from the United Arab Emirates and Italy’s Giorgio Roda. Out of all the teams that contested the GTE-Am class at the Le Mans classic, the drivers of the #88 vehicle achieved the best grid position. Competing in the 911 RSR campaigned by the Project 1 team are Porsche works driver Jörg Bergmeister (Germany), Patrick Lindsey from America and Norwegian Egidio Perfetti. The two Englishmen Michael Wainwright and Ben Barker join forces with Alex Davison from Australia in the cockpit of the nine-eleven run by the British customer team Gulf Racing.

The Porsche 911 RSR
The Porsche 911 RSR celebrated its WEC debut at Silverstone in 2017. So far this season, the racer from Weissach has clinched a one-two result in the GTE-Pro class at Le Mans as well as the GTE-Am class win. The water-cooled four-litre boxer engine is based on the seventh generation of the iconic 911 sports car and produces around 510 hp depending on the restrictor. The #91 and #92 vehicles tackled Le Mans sporting a special historic design. For the Silverstone round, the Porsche GT Team will revert to the factory design with the primary colours white, red and black.

The race on TV and Internet
Round three can be viewed free-of-charge via live streaming from 12.30 to 19.30 hrs on Sport1.de. The free-to-air station Sport1 will also broadcast the race from 14.30 to 14.45 and from 15.45 to 19.15 hrs. The race is aired on the pay-TV channel Sport 1 Plus from 13.30 hours. Eurosport 1 televises the race free between 18:15 and 19:10 hours. Moreover, the entire race can be watched on the pay-TV channel Eurosport Player. The pay-TV channel Motorsport.TV also broadcasts the six-hour race from 12:45 to 19:15 hours. For a fee, the FIA WEC app offers live streaming of the complete race as well as the time-keeping.

Pre-race quotes
Dr Frank-Steffen Walliser (Vice President Motorsport and GT Cars): “After the close fight at Le Mans we’re ready to take on the next challenge. Our aim is to defend our lead in the points. Silverstone enjoys a long tradition and holds a very special place in the hearts of drivers and motor racing enthusiasts. We’re up against tough competition, but we’re perfectly prepared. At Le Mans, the Porsche 911 RSR once again underlined that it can handle huge stresses and is reliable.”

Pascal Zurlinden (Director GT Factory Motorsport): “The high grip level at Silverstone puts special demands on the setup of the 911 RSR. Intuition and finesse are needed here. Only those who opt for the right setup will be in a position to fight for victory. We were among the frontrunners to the end at Spa and we scored a double victory at Le Mans – it should continue like this at Silverstone.”

Richard Lietz (Porsche 911 RSR #91): “Our podium result here last year indicates that the track suits the 911 RSR. And this was reconfirmed at our last test here. The new track surface, however, is really aggressive, so we’ll have to keep an eye on our tyres. Traditionally, loads of fans flock to the racetrack. I can’t wait to finally go racing again after Le Mans!”

Gianmaria Bruni (Porsche 911 RSR #91): “Richard and I will do our very best to get the most out of it for Porsche. I’ve won twice at Silverstone and I’d now like to achieve another victory in England. During the summer break I worked on my fitness in Italy so that I’m perfectly prepared to take on the next races.”

Kévin Estre (Porsche 911 RSR #92): “After the Le Mans win we’re heading to Silverstone feeling very confident. Thanks to our second place at Spa and victory in France, we’re leading the championship. To retain our lead, however, we need to keep earning points. Due to the corner combinations, the tyres are put under immense stress, especially at high temperatures. We need to keep this in mind.”

Michael Christensen (Porsche 911 RSR #92): “The Silverstone circuit suits the 911 RSR. In the past, we’ve achieved great results there. I’m expecting to fight for a top spot again this year, although the competition is very strong. After the Le Mans win I contested a few races in America, but I still managed to recharge my batteries. I’m ready for the next WEC races.”

Jörg Bergmeister (Porsche 911 RSR #56): “I’m heading to Silverstone feeling very optimistic. Our pace was good at the previous races in Spa and Le Mans. The only thing that was missing for us to finish at the front was a little race luck. We’re hoping to finish on the podium in England.”

Matt Campbell (Porsche 911 RSR #77): “I know Silverstone from last year when I contested the Porsche Mobil 1 Supercup. It’s great fun driving the Porsche 911 RSR here, especially due to the high speeds and the corner combination in the middle sector. After the maiden victory at Le Mans for Dempsey Proton Racing, we’re travelling to England with a great deal of self-confidence.”

Julien Andlauer (Porsche 911 RSR #77): “I’m very much looking forward to the race. Our goal is to bring the spirit from the races at Spa and Le Mans to Silverstone. I competed in Silverstone for the first time with the Porsche Mobil 1 Supercup this year and managed to gain some impressions of the racetrack. It’ll definitely help me. To prepare for the race I turned laps of the circuit in the simulator and I watched videos of the 911 RSR from last year.”

Matteo Cairoli (Porsche 911 RSR #88): “This circuit suits me. Passages like Becketts are very fast and technically demanding. Khaled, Giorgio and I had a bit of bad luck and we now want to reverse this trend. Our good qualifying result at Le Mans showed that we can be very fast.”

The Sports Car World Endurance Championship WEC
In the Sports Car World Endurance Championship (WEC), which was first contested in 2012, sports prototypes and GT vehicles compete in four classes: LMP1, LMP2, GTE-Pro and GTE-Am. They all compete together in one race but are classified separately. The Porsche GT Team contests the GTE-Pro class, while the customer teams Dempsey Proton Racing, Project 1 and Gulf Racing fight for honours in the GTE-Am class.