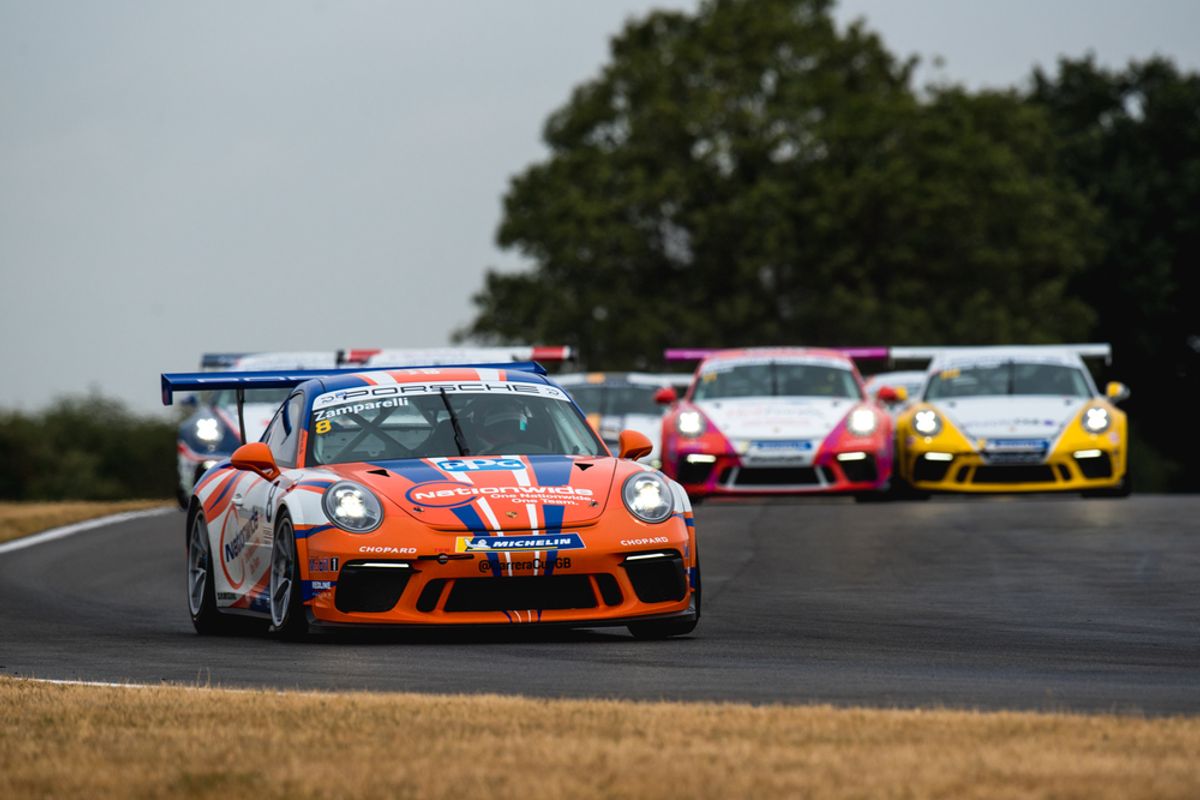 The fastest single marque GT racing championship in the UK, the Porsche Carrera Cup GB, heads to its most unpredictable venue amid one of its most unpredictable seasons in recent history. Around the challenging swoops and crests of Knockhill, three category title battles could see a decisive move to break season-long duels at the top of the points table in the Pro, Pro-Am and Am categories. Knockhill could once again produce a championship-deciding clash.

A wild card in the form of Valentin Hasse-Clot (Motorbase Performance), in his second guest appearance from Porsche Carrera Cup France, will only add to the anticipation.

Following a victory and a podium finish at Snetterton, Dino Zamparelli (Redline Racing) heads to Scotland once again in the lead of the Pro category championship. Former GP3 team mate Tio Ellinas (Slidesports Engineering) took the lead at the mid-point of the season, and the pair are now separated by just four points.

Zamparelli, the only triple winner of 2018, has attempted to stamp his authority on the 2018 season with a consistent run of podium finishes, broken only by bad luck at Oulton Park. Ellinas has also demonstrated his determination with pole positions, one win and his own run of podium finishes. However, the Cypriot driver had a tough weekend in Fife when he first visited last season, whereas Zamparelli emerged with a pair of second place finishes.

The Pro category has so far seen six different race winners in 2018, amongst them Tom Wrigley (JTR) who secured his second win of the season at Snetterton with an impressive lights-to-flag victory in round ten. A flying Wrigley has moved up to third in the Pro category championship, only twelve points behind Zamparelli, putting him well within striking distance of Zamparelli and Ellinas.

Wrigley’s team mate Lewis Plato (JTR) is another race winner in 2018, a string of podium finishes so far this season underlining his speed and consistency. Plato will be looking to continue his front-running form from the first half of the season as he relishes the challenge of Knockhill where last year he delivered fighting fourth and second place finishes.

17-year-old Porsche GB 2018 / 2019 Junior Dan Harper, fresh from receiving his AS-level exam results, has already clinched a maiden victory and pole position in his debut season. Climbing a steep learning curve, Harper proved his wet weather ability in the opening laps of round nine and in the second part of the season has shown his ability to produce consistently strong performances. Although his first visit to Knockhill in a 911, Harper will at least have the opportunity - along with the rest of the field - to test at the circuit on the Wednesday prior to the race weekend.

Frenchman Valentin Hasse-Clot (Motorbase Performance) made a dramatic entrance to the championship at Snetterton. The reigning Porsche Carrera Cup France Rookie champion, an outright race winner in 2018 and sixth in the overall standings, is dovetailing his existing commitments in Carrera Cup France with a partial Carrera Cup GB campaign. In wet conditions for round nine, Hasse-Clot climbed from seventh on the grid to second place in just seven laps, demonstrating electric pace on an unfamiliar circuit before a mistake put him into retirement. Starting from the back of the grid in round ten as a result, Hasse-Clot made a series of instinctive and clean overtaking moves as he worked his way through the pack to join his Pro category rivals. Although the unique demands of Knockhill will once again place the French star at a disadvantage, wet weather could play to his strengths.

The narrow margin between the top Pro category contenders is a scene replicated in both the Pro-Am and Am categories. Jamie Orton (JTR) maintains his lead of the Pro-Am championship, but Rookies Seb Perez (Amigos Team Parker) and Dan Vaughan (Motorbase Performance) are hot on his heels. At Snetterton, Perez and Orton were inseperable throughout both races. Ultimately Orton prevailed by a small margin to secure two category victories, but Perez is looking ever more threatening with every passing round. For his part, Vaughan has already shown the ability to challenge Orton and Perez this season with category victories, but both Rookies will have more to learn on their first visit to Knockhill in a 911 GT3 Cup.

The highly experienced Justin Sherwood (Team Parker Racing) will be engaged in a battle with Rookie Esmee Hawkey (GT Marques), the pair separated by just five points in the Pro-Am category standings as Hawkey aims to better her second place finish at Monza and Sherwood his third place finish at Donington.

Am category rivals Peter Kyle-Henney (IN2 Racing) and Peter Mangion (Team Parker Racing) have established a thrilling season-long rivalry. Going into the weekend, just three championship points separate the pair following two wins for Mangion at Snetterton. Both drivers have scored a string of first and second place results in the Am category with some breathtakingly close, yet respectful, wheel-to-wheel racing.

The only other category race winner in 2018 will be Iain Dockerill (Asset Advantage Racing), who scored a double podium last season and will be looking to add to his 2018 tally following a win in Monza. Former BTCC racer Richard Hawken (Slidesports Engineering) and Shamus Jennings (G-Cat Racing) have both visited the Am category podium this season and, along with Dockerill, could be well placed to push Am championship contenders Kyle-Henney and Mangion.

Rookie Gary Eastwood (G-Cat Racing) and Fraser Robertson (Redline Racing) were involved in some close fights during the first half of the season, both tasted champagne on the podium and will be eager for a repeat. Likewise, David Fairbrother (Slidesports Engineering) will want to repeat his Am category victory in 2017 before the end of this season. Steve Gales (Welch Motorsport) continues to make progress in adapting to the 911 GT3 Cup in this, his first season, although the demands of Knockhill will provide the toughest challenge yet.