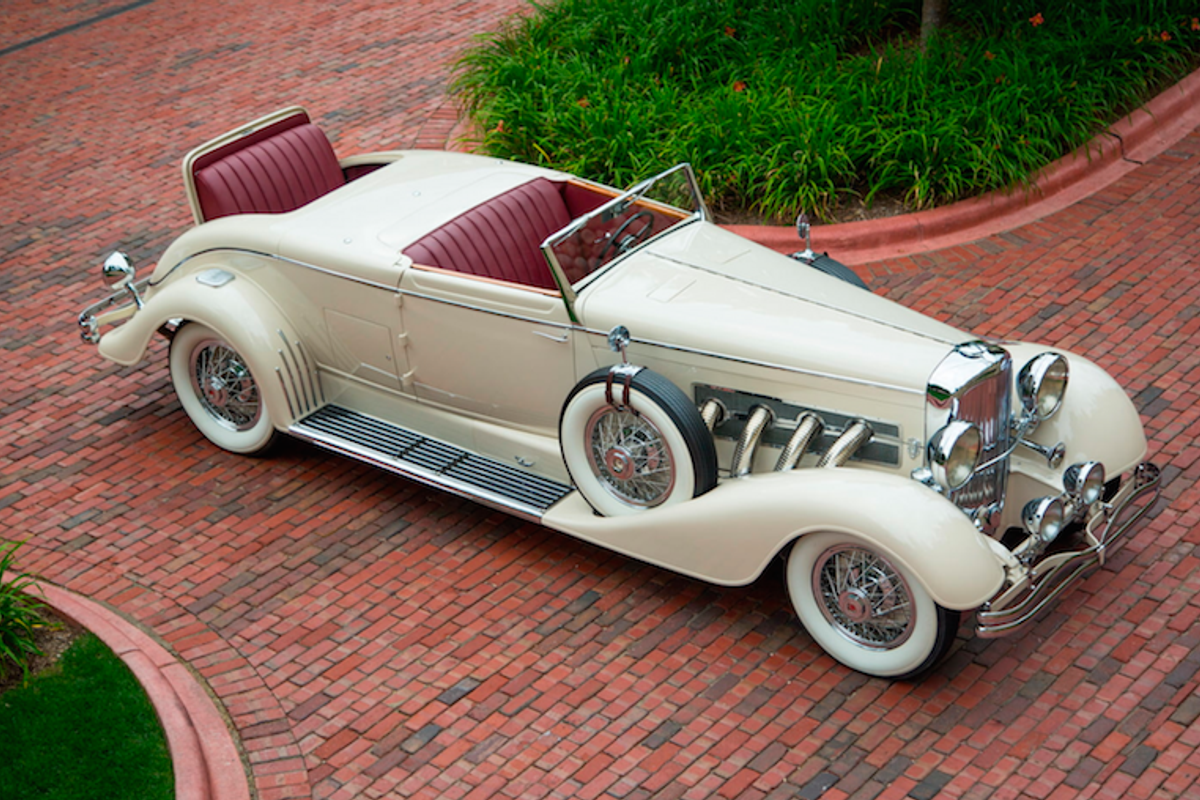 Bohman and Schwartz only built 14 bodies total for Duesenberg, 10 of which were placed on cars with pre-existing coachwork. Notable cars with upgraded Bohman and Schwartz coachwork include the Clark Gable SWB Convertible Coupe J-560, the Mae West SWB Convertible Coupe J-370 and the Phillip Wrigley SWB Convertible Sedan J-464
Formerly part of The Harrah Auto Collection, The Blackhawk Collection and The Imperial Palace Collection
Featured in Dennis Adler's Duesenberg book and Josh Malks' Illustrated Duesenberg Buyer's Guide
Documented by multiple well-respected Duesenberg historians including: Fred Roe, Ray Wolff, Gerry Gebby, Don Butler, Dean Batchelor, J. Elbert, Keith Brown, Don Howell and Dennis Adler
Every so often, like a debutante at the cotillion ball, a regal classic-era Duesenberg Model J is presented to the public, one with such impeccable style and breeding that onlookers are spellbound by its beauty and grace. Chassis No. J-386/2421 is just such an automobile, a breathtaking masterpiece that has elicited the admiration of generations of Duesenberg aficionados. It is singularly rare, the only long-wheelbase Model J Convertible Coupe Disappearing Top Roadster with Bohman & Schwartz coachwork. Its impressive provenance includes early Hollywood celebrity ownership and inclusion in the famed Big Three Duesenberg collections, and it boasts ACD Certification and affirmation by the “who’s who” of Duesenberg historians.

To own a Duesenberg such as this means that forever one’s name will be linked with some of society's elites, magnates, barons, stars and starlets. A car of such importance demands to be enjoyed, protected and preserved for the national treasure she is. J-386 has lived that cloistered existence most of its life, having been carefully tended to by three of the foremost Duesenberg collections: the Harrah Auto Collection in Reno, Nevada, the Blackhawk Collection in Danville, California, and Las Vegas’ Imperial Palace.

Of the 32 or so coachbuilders Duesenberg consigned to build custom bodies for the Model J, the most productive was the Walter M. Murphy Company, who was responsible for an estimated 140 of the 488 production total. Murphy's most-favored status with its exclusive clientele was certainly a reflection of not just the superior quality of its designers and craftsmen, but also the good fortune of residing on the outskirts of Los Angeles, the playground of Hollywood's elite.

Indeed, Murphy was one of the very few coachbuilders west of the Mississippi. So, with an all-star team of design talent that included Herb Newport, Phil Wright and Franklin Hershey, it is difficult to conceive that Murphy Co. would fail in 1932. Yet, it did, an early casualty of the Great Depression. Up from the ashes, Murphy veterans Chris Bohman and Maurice Schwartz created a leaner boutique firm of their own name. Though still located in Pasadena, this time much of their business was focused on modernizing coachwork on existing motorcars. Some of these Bohman & Schwartz redesigns involved little more than adding a few embellishments. However, with others, the designer started with a completely fresh canvas. Many in Hollywood sought their restyling magic, including Mae West (Bohman & Schwartz J-370) and Clark Gable (Bohman & Schwartz J-560). Indeed, of the 14 total Bohman & Schwartz-bodied Duesenbergs, 10 began as creations of other coachbuilders, later improved by Bohman & Schwartz.

At the time of their demise, Murphy was the most prolific creator of the Duesenberg convertible coupe, creating 60 of the 76 examples. Indeed, many Murphy design cues could be found on the more stylish Bohman & Schwartz interpretations. Only six convertible coupes were placed atop the supremely commanding 153.5-inch long wheelbase. Ultimately, only one of these, J-386/2421, would wear the prestigious Bohman & Schwartz name tag.

The original owner of J-386/2421 was veteran stage and screen actress Marie Dressler, who won the 1930-31 Academy Award for Best Actress for her role in the movie “Min and Bill,” and was nominated for Best Actress again in 1932 for her role in "Emma." Dressler appeared in more than 20 films between 1927 and the time she ordered this Duesenberg in 1933. She commissioned LeBaron to fit the chassis with an elegant seven-passenger convertible berline body well suited to the long wheelbase. Dressler passed away in 1934 from cancer and soon after, top-grossing film producer/director Roy Del Ruth (best known for directing "Blonde Crazy" and "The Maltese Falcon" in 1931, "Taxi" in 1932 and "The Little Giant" in 1933) acquired J-386 and, inspired by other examples of their artful designs and coachwork, commissioned Bohman & Schwartz to upgrade this Duesenberg into a most magnificent long-wheelbase convertible coupe of the disappearing-top style.
The Bohman & Schwartz Disappearing Top Roadster makeover included skirting of the fenders; elongating the hood to the windshield, raising the deck and sculpting a tail to better conceal the fuel tank and chassis. In more recent times, the Bohman & Schwartz single-bar-design bumpers and bullet headlamps have been replaced with standard Model J fare, and a second tail light has added some bling. Surely, the car proudly positioned on movie back lots, polished side-pipes agleam in the California sun, must have assuaged any doubt that Del Ruth was at the top of his profession.

This ACD Club-certified example has been documented by multiple well-respected Duesenberg historians: Fred Roe, Ray Wolff, Gerry Gebby, Don Butler, Dean Batchelor, J. Elbert, Keith Brown, Don Howell and Dennis Adler. In 2007, J-386 graced the lawn at the Pebble Beach Concours d'Elegance for special display and was not judged, lending the new owner an opportunity to unveil this Duesenberg Disappearing Top Roadster on the judging field. Its glamorous history, unquestioned provenance, rare long-wheelbase design and stunning condition make this a "Duesy" for the ages—one for only the most discriminating buyer.