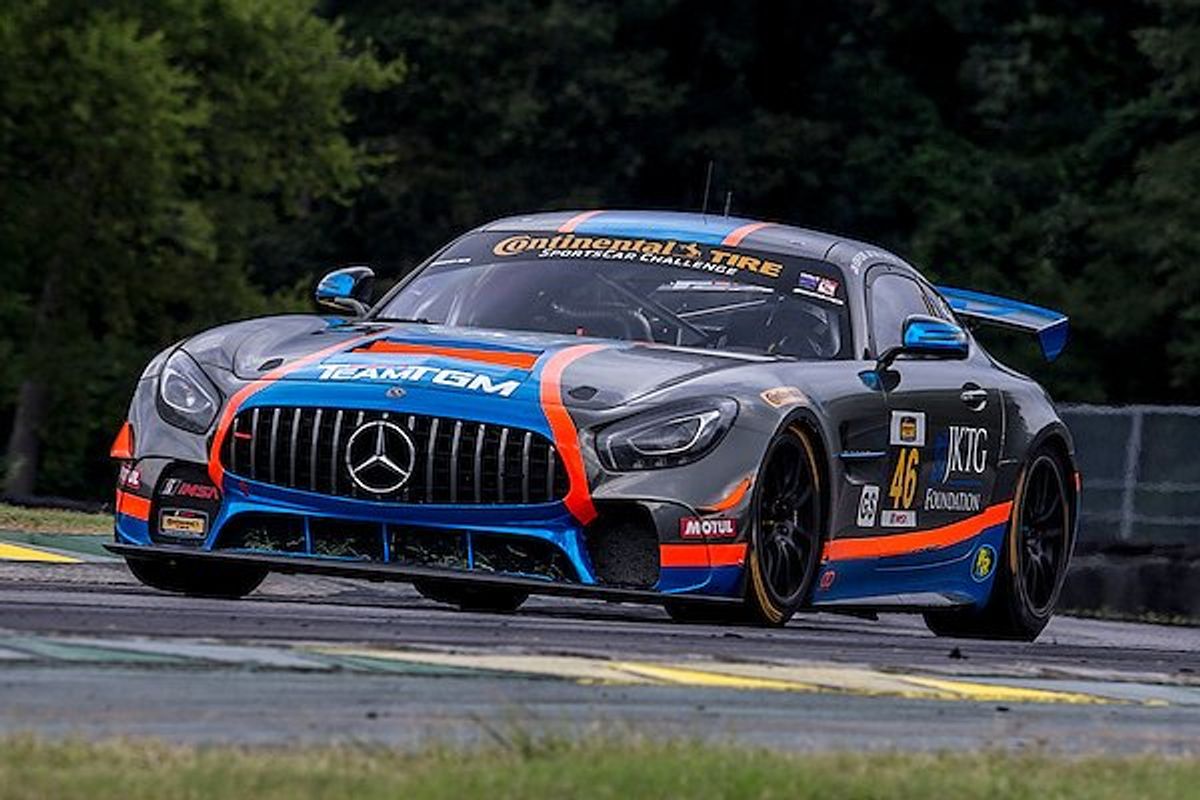 Plumb, Trinkler and the No. 46 team survived two heavy rain showers that many of their competitors didn’t in the two-hour IMSA Continental Tire series race and then sealed the victory with a key pit-side call by team strategist Joe Varde.

Trinkler stayed on slick Continental tires throughout his race-opening double stint and pitted from the lead to hand the No. 46 off to Plumb with just over 45 minutes remaining.

Plumb rejoined the race in third place but cycled back to the top when the first and second place competitors had to pit for fuel 14 minutes from the finish. Varde’s fuel-stretching, two-stop strategy kept plenty of fuel in the No. 46, and Plumb raced to the finish for a 6.046 second margin of victory.

The win was the second for Plumb and Trinkler in the No. 46 in the last three races and follows a breakout victory at Lime Rock Park in July that was the first for TeamTGM in the IMSA Continental Tire series and the first for the Mercedes-AMG GT4 in North America.

Plumb and Trinkler split the victories with a third-place finish two weeks ago at Road America to take a championship lead in the IMSA Continental Tire series Grand Sports (GS) class they extended with today’s win.

After coming into the VIR weekend one point ahead of the second-place competitors in both the GS driver and team championships, Plumb, Trinkler and the No. 46 team unofficially now lead the closest competitor by 18 points, 226 – 208.

Stepping in for co-driver Ben Keating, Jeroen Bleekemolen qualified the Mercedes-AMG Team Riley entry for the first time this year. He clocked in second fastest in the session in what was the best qualifying result of the IMSA WeatherTech Championship season for the Mercedes-AMG GT3.

Bleekemolen nearly won the pole but his flying qualifying lap was hindered by a sudden rain shower that began halfway through the 15-minute session. He still managed to turn a top time just .216 of a second off the pole winner’s lap and will take the green flag for tomorrow’s two-hour and 40-minute race from the outside front row.

Round 9 of 11 GT Daytona (GTD) races on the 2018 IMSA WeatherTech Championship calendar, the Michelin GT Challenge at VIR can be seen live in a split-broadcast on FOX Sports 1 (FS1) and FOX Sports 2 (FS2). Coverage starts tomorrow, Sunday, August 19, at 1 p.m. EDT on FS1 before switching over to FS2 for the balance of the race at 2 p.m. EDT. International viewers can watch live at IMSA.tv.

Sunday’s schedule begins with a 20-minute warmup session for the IMSA WeatherTech Championship at 8:30 a.m. EDT before the Michelin GT Challenge at VIR goes green at 1:05 p.m. EDT.

Jeroen Bleekemolen, Driver – No. 33 Mercedes-AMG Team Riley Motorsports Mercedes-AMG GT3: “Our Mercedes-AMG GT3 is great. We have been up there all weekend fighting for P1. We were going for pole and really had a car that could have been on the pole. Normally P2 is always a good place to start from, but we’re still a little disappointed not to get the pole. We think we had it in the Mercedes-AMG GT3, but it just started raining a little too early. I had a great lap going but it was wet in the last turn. It was still my best lap, and it’s still a good starting position. It’s going to be a tight race, everybody is pretty much on the same strategy, so we should have a pretty strong chance to fight for the win tomorrow. We are up there, we have the pace, we just have to be smart now and have a clean race. Hopefully we can grab the lead at some point and stay there.”

Hugh Plumb, Driver – No. 46 TeamTGM Mercedes-AMG GT4: “This is unbelievable. I am so happy, I am happy for the guys and I am happy for the manufacturer of the vehicle we are driving, which just happens to be Mercedes-AMG. Owen just did a fantastic job. Really, that was his call to stay out and on slicks, and the guys on the box did an amazing job. This team that Ted Giovanis has put together is the best in the business, and Joe Varde is a leader. That trickles down to everyone else on the team. Joe looked me in the eye before I got in the car and just said ‘remember what you are doing out there,’ in terms of the championship points. I just keep listening to him and he is the best in the business.”

Owen Trinkler, Driver – No. 46 TeamTGM Mercedes-AMG GT4: “It’s a team effort. From the pit box, to the pit-stop guys, to Hugh’s stint and my stint, we all pull our weight. That’s what this team is all about. Joe Varde and I had a long talk in the trailer before I went down to the car today, just the two of us, and I kind of had a feeling this race would go this way. We tried to make a call to put rain tires on but then we changed our minds and just put fuel in it instead. I am just so happy for everybody here at TeamTGM, and I am happy for everyone at Mercedes-AMG because we now have two wins on the season. I don’t pay attention to the points, but I know we are there. That’s going well, we just have to keep doing our thing, and we will be there at Atlanta.”