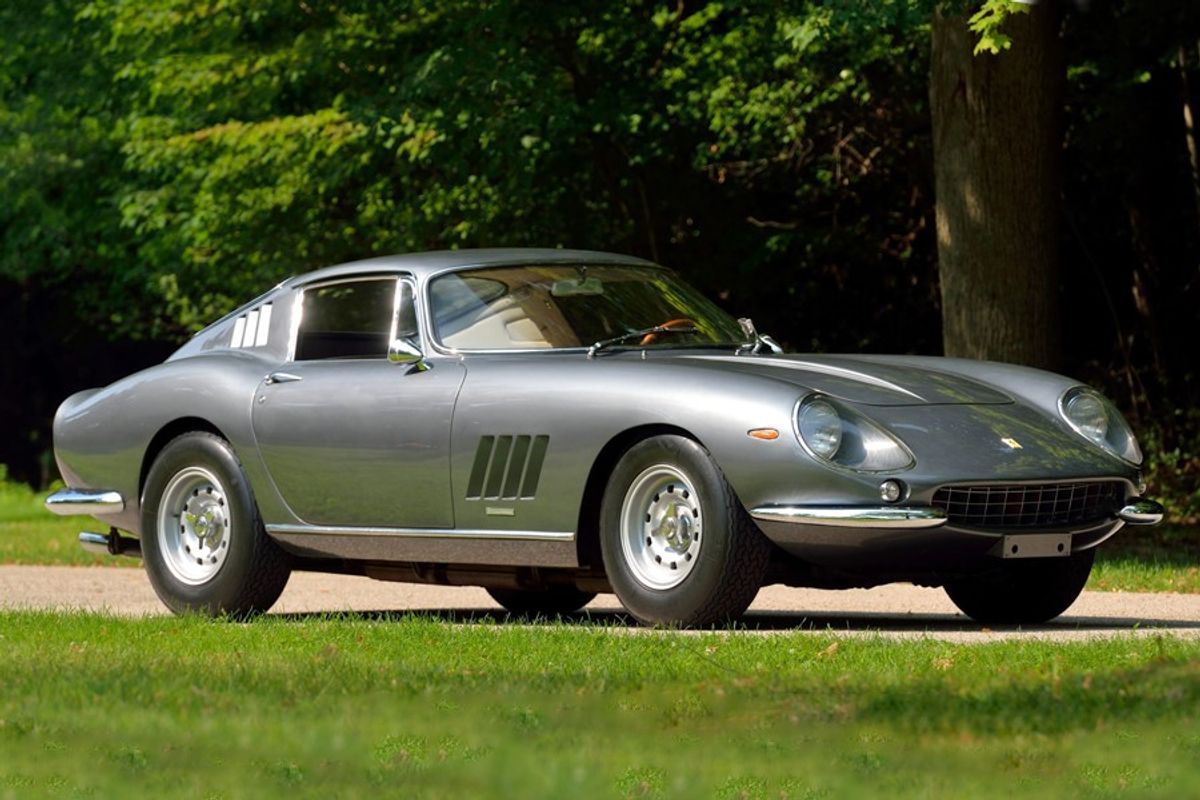 S/N 10717, Engine No. 10717
Ferrari Classiche Certification
Purchased by Ferrari Mechanic Terry Myr in 1970
He retained the car until October 2015 upon which time selling it was a necessity
Original unrestored with one repaint in the early 1970s
Refinished in Grigio Mahmoud
Original 3,286cc four-cam V-12 engine
Six Weber carburetors
5-speed manual gearbox
Front and rear disc brakes
Original Saddle Tan interior
Original glass and lenses
Upgraded AM/FM radio
Offered with the original owner's manuals, factory tool roll, wheel chock and bill of sale from 1970
The car had an odometer repair/replace
The correct mileage is believed to be just under 15,000 kilometers per Terry Myr

Late in 1964, Ferrari introduced two new cars, the 275 GTB and 275 GT Spyder, on similar chassis, and for the first time a Ferrari GT incorporated independent suspension at all four corners.

The 275 also had 4-wheel disc brakes and an all-new rear suspension inspired by the 250 LM prototype racer that used parallel upper and lower A-arms with coil springs, Koni shock absorbers and a sway bar to control body roll. The 275 GTB was enveloped in a voluptuous new body designed by Pininfarina and built by Scaglietti. Its similarities to the magnificent 250 GTO endurance racer were unmistakable; indeed, Sergio Pininfarina confirmed that he and his design team were directly inspired by Ferrari’s world-championship-winning GT for the 275 GTB’s breath-taking shape. The 275 GTB’s long-hood, short-tail profile and recessed covered headlights were certainly familiar, but its higher belt and fender line gave the new car a more solid appearance and gentler, more-rounded contours. Set at a low angle, the wraparound windshield added to the 275 GTB’s aerodynamic shape, and its integrated rear spoiler directly recalled that of the GTO.

Handsome cast-alloy knock-off wheels replaced the traditional Borranis, but Ferrari still relied on Michelin’s excellent “X” radials. The 275-series Ferraris employed the final development of the “short block” V-12 engine designed by Gioacchino Colombo in 1947. This robust and flexible engine delivered 280 HP in the GTB, and it was available with three Weber downdraft carburetors in standard form, with six as an option. Both the GTB and GTS utilized an all-synchronized 5-speed gearbox mounted at the rear in transaxle form—a Ferrari first.

This example, purchased by Ferrari Mechanic Terry Myr in 1970, carries Chassis No. 10717 and its original matching engine, also No. 10717. Original and unrestored but for a single repaint in Grigio Mahmoud in the early 1970s, it retains its original Saddle Tan leather interior, glass and lenses, and it presents in excellent overall condition.

In addition to an upgrade to an under-dash AM/FM radio, the car received a repaired/replacement odometer; Mr. Myr believes the correct mileage is just less than 15,000 kilometers. This exquisite classic Ferrari has earned Ferrari Classiche Certification and will be offered with the original owner's manuals, factory tool roll, wheel chock and bill of sale from 1970. Ferraris of this caliber, originality and rarity are seldom offered for public sale, making this a very special opportunity to move into the investment-grade Ferrari marketplace.