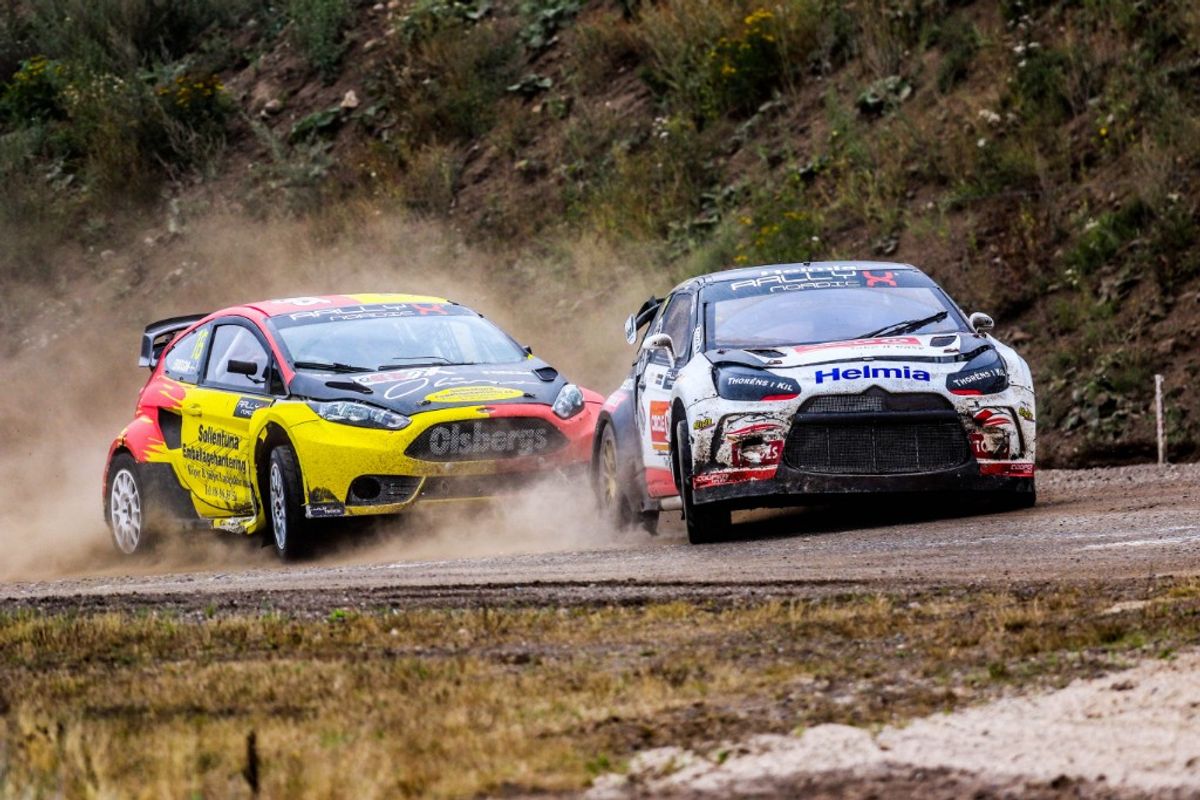 RallyX Nordic presented by Cooper Tires ventures into exciting new territory for the penultimate round of the 2018 season (25-26 August) with an inaugural visit to Finland and the iconic Kouvola track featuring a mammoth entry list of 33 Supercars.

With only two rounds of the season remaining Oliver Solberg and Thomas Bryntesson are tied atop the RallyX Nordic points’ table, while Oliver Eriksson remains very much in contention by heading to Finland a mere ten points adrift.

Battle resumes this weekend in Kouvola, located 130km northeast of the Finnish capital Helsinki. The track, a former World RX of Finland venue, is a popular new addition to the schedule following RallyX Nordic's expansion into a nation with a rich history in motor sport.

Nevertheless, Kouvola represents a new challenge for more than simply its technical, flowing layout with the leading RallyX Nordic contenders priming to do battle with a wealth of local talent bidding to upset the regulars on home soil.

In all, 23 drivers predominantely competing in the Finnish Rallycross Championship bolster the RallyX Nordic entry list in Kouvola to bring the entire Supercar field to 33.

Leading the local charge is Riku Tahko, a former Euro RX racer who currently leads this year’s Finnish national championship in his MINI Cooper Countryman. He is joined by his closest rivals for the domestic title Ari Perkiomaki (Ford Fiesta) and Mikko Ikonen (Saab 9-3) as the drivers to watch amidst their own title fight this weekend.

Last year’s Finnish Rallycross Champion Atro Maatta will also be present on the starting grid in Kouvola at the wheel of his Ford Fiesta, while 2016 title winner and current Euro RX contender Jere Kalliokoski returns to his native land to target victory in a Skoda Fabia. Elsewhere, the event will also see the anticipated return of Aki Karttunen in a Volvo S40. A former front-runner in Finland, Karttunen is making his first appearance since the end of the 2016 season.

Meanwhile, round five will see the debut of former World RX driver Lukacs “Csucsu” Kornel, who joins the RallyX Nordic ranks in his Volkswagen Polo. Having contested a full season of World RX in 2017, “Csucsu” will dovetail his current Euro RX commitments in a car prepared by RallyX Nordic stalwarts Hedstroms Motorsport.

The expanded entry list will simply serve to ramp up the pressure on a thrilling title battle as Solberg and Bryntesson bid to forge ahead prior to the RallyX Nordic finale in Tierp Arena on 6-7 October.

With Solberg listed in front by virtue of his two wins to Bryntesson’s single victory, the pair nonetheless face a burgeoning threat from Eriksson after he finished ahead of both last time out in Nysum. Seeking his first win of the season, the Olsbergs MSE driver is now just ten points behind and with more drivers competing to potentially steal points from one another this weekend, Kouvola could prove crucial in this year’s title fight.

Similarly, Ola Froshaug and Peter Hedstrom in fourth and fifth overall will hope this also works in their favour as they look to bolster their points tallies. Notably, Hedstrom is the only RallyX Nordic regular to have previously competed at Kouvola during the 2014 Euro RX round.

In addition to the Supercar class, the support programme once more features the Supercar Lites class, while RX Academy features on the RallyX Nordic schedule for the second time this season.

QUOTES
Riku Tahko, current leader of the Finnish Rallycross Championship: “I think this will be the most exciting rallycross event we have ever seen in Finland! There is a great line up of top drivers – proper Supercars – and everyone is buzzing. As I’m leading the Finnish Championship there could be a small change in my driving to play with strategies but I won’t be focusing too much on the points. I cant’t imagine a better way to win the title in Finland than by beating the top RallyX Nordic drivers at our home track. It’ll be flat out from the first corner!”

RallyX Nordic Series Manager Ian Davies, commented: "As a nation synonymous with motor sport at the highest levels, Finland is a logical addition to the RallyX Nordic presented by Cooper Tires calendar. That we are able to visit such an excellent venue in Kouvola makes it particularly special and we are excited to be bringing our high quality rallycross racing to Finland for the first time. Moreover, fans will get to enjoy a thrilling RallyX Nordic title battle that is finely poised coming into the weekend, and if that wasn’t enough there is a huge Finnish field to cheer too. It’ll be unmissable."

Currently 25 points ahead of Ben-Philip Gundersen, De Ridder will be crowned champion if he scores five more points than his Norwegian rival in Kouvola this weekend. Elsewhere, Nysum winner Sondre Evjen will look to close the gap to Gundersen from third place, while Simon Olofsson and William Nilsson round out the  top five.