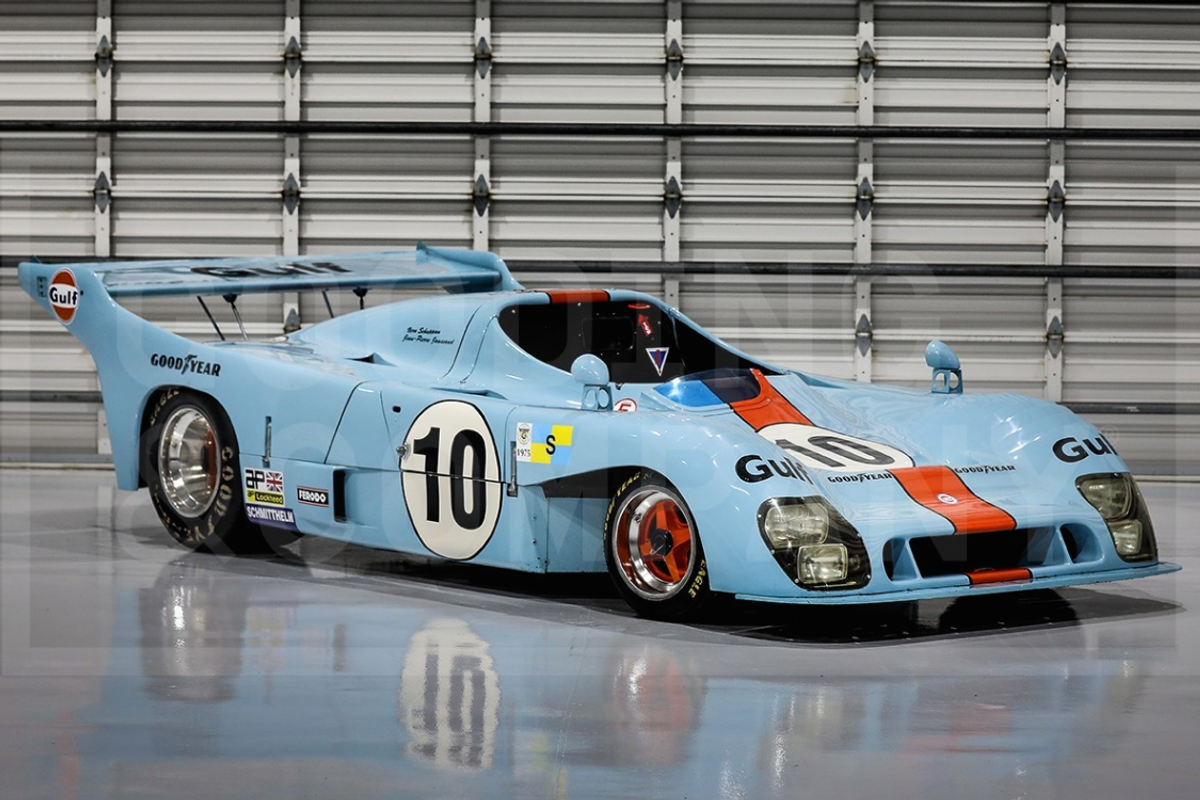 THIS CAR
After the 1966 World Manufacturers’ Championship racing season, famed team manager John Wyer, along with team owner and racer John Willment, formed JWAE, and with backing from Gulf Oil Corporation, developed and raced a GT40-based Gulf-Mirage M1 Sports Prototype in the 1967 season. The M1 design was a success with Jacky Ickx winning the 1000 Kilometers of Spa in 1967 and scoring the first FIA Manufacturers’ Championship Points for Mirage. With the change of FIA Regulations in 1968, Wyer converted the 1967 Gulf-Mirage M1 to the 1968 Gulf-GT40, winning the 24 Hours of Le Mans in 1968 and 1969. By 1972 and the end of the Gulf-Porsche 917s, the Gulf Wyer team would develop a three-liter prototype utilizing a slightly detuned version of Ford’s Cosworth DFV Grand Prix engine, dubbed the M6. In 1974, the M6 became the GR7, before a new model called the Gulf-Mirage GR8 bowed for the 1975 season.

The GR8, designed by Len Bailey, featured an immensely strong, riveted aluminum monocoque chassis, with steel bulkheads. The engine and Hewland five-speed transaxle were stressed members; suspension was by double wishbones up front and parallel links at the rear. The lightweight fiberglass body was aerodynamic and attractive, producing 21% less drag than the GR7.

Two GR8 chassis were built, numbered 801 and 802, the latter being the car offered here. Both cars were entered for Le Mans in 1975 and completed testing at Silverstone ahead of the race, having been converted from standard Hewland transaxles to ZF units that would better cope with the demands of the 24-hour event and the inherent vibration of the DFV engine.

The GR8 examples proved up to the task. Chassis 801 qualified on the pole with Jacky Ickx and Derek Bell, and 802 started alongside in second, driven by Jean-Pierre Jaussaud and Vern Schuppan. The race at Le Mans was dramatic, with both entries experiencing mechanical issues so inherent to the event, but in the end, 801 was victorious, and 802 finished 3rd. It was a tremendous result for an independent manufacturer running a new design in the world’s toughest endurance race.

After nine years, three world championships, and three outright victories at Le Mans, Gulf Oil pulled out of racing at the end of the 1975 season, selling the Mirage team to former North American Racing Team driver and entrepreneur Harley Cluxton III. His GTC-Mirage organization would be among the most successful teams since WWII.

Cluxton had been driving for Luigi Chinetti’s NART team when he was first introduced to Wyer and John Horsman at the 1970 24 Hours of Daytona, and the three would become friends over the next five years. Wyer contacted Cluxton in 1975 to tell him Gulf wanted to sell the GRRC and that he should buy it. Cluxton demurred: “I thanked John and told him that I was flattered, but I didn’t have that sort of money and the very last thing I wanted to do was to embarrass John, or myself by making a fool out of myself with Gulf Oil.” But Wyer would have none of it and kept insisting.

“I finally gave in to John on the precondition that John Horsman would come on as GTC’s director of racing and [Wyer] would come out of retirement to counsel me, while I worried about sponsorship,” Cluxton recalled. “I telephoned my point of contact at Gulf Oil, introduced myself, and then made my ridiculously low offer for everything Gulf-Mirage: the trademark, the team, transporter, two GR8s, intellectual rights, drawings, equipment, jigs, wheels, gearboxes, motors, Mirage parts going back to 1967, et cetera, and to my jaw-dropping amazement, my point of contact said, ‘Yes!’ without hesitation.”

GTC entered both GR8s, now M8s, at Le Mans in 1976, calling them Mirage Fords. Jean-Louis Lafosse and François Migault took the wheel of 802, and after frantic pit work with minutes to go, finished 2nd behind the factory Porsche 936 of Ickx and Gijs van Lennep.

For 1977, thanks to an arrangement with Renault team manager Gérard Larrousse, the Cosworth V-8s were replaced by Renault 2.1-liter twin turbo V-6 engines to become Renault-Mirage M9s. While powerful and much smoother than the DFV, the higher-revving Renault’s taller gearing, coupled with the M9 Mirage’s taller wheels and less aerodynamic body, gave a lower top speed compared to the Alpine A442 and Porsche’s 936. Nevertheless, drastic attrition among the faster Alpines and Porsches led to Schuppan and Jean-Pierre Jarier finishing 2nd in 802 in one of the most memorable Le Mans battles – its third podium finish in three tries.

In 1979, Renault shifted its attention to Formula 1, so Horsman and Cluxton went back to Cosworth DFV V-8 engines, and the two GR8 chassis were known as Ford M10s. Bell and Schuppan tested the cars, and the team was optimistic. But on the 43rd lap at Le Mans, Jaussaud was driving M10/802 when he stopped with no gears. Receiving shouted instructions, he removeda gearbox side plate and crawled to the pits in second gear. After repair, Jaussaud was running faster than ever, but his headlights went out, forcing him to retire. Meanwhile, 801, driven by Bell, David Hobbs, and Schuppan, failed to start in the pits during the 24th hour.

It was the final Le Mans appearance for the two 1975 GR8s after 10 starts at Le Mans in five years. During its racing career, chassis 802 traveled an estimated 14,000 miles at Circuit de la Sarthe, was never involved in an accident, and only failed to finish the grueling 24-hour race once. Under both Gulf Oil and Grand Touring Cars Inc. ownership, the team was always competitive, and should be considered among the finest motorsport enterprises of its type ever assembled. Indeed, Mirages were the first to wear the legendary powder blue and marigold livery of Gulf Oil in 1967, the first to post race wins for Gulf, and the last to win the 24 Hours of Le Mans overall for Gulf (1975).

In 1987, Grand Touring Cars Inc. sold 802, fitted with its 1975 Gulf-Mirage GR8 body and accompanied by its 1979 M10 body to Peter Kaus’ Rosso Bianco Collection in Germany. Kaus sold 802 to Dutch collector Evert Louwman in 2004, and the car was bought by a private collection in 2006. Four years later, 802 was acquired by German collector Roald Goethe,who entered 802 in the 2012 Le Mans Classic partnered with one of the car’s original drivers, Schuppan. Cluxton was fortunate to be reunited with 802 in 2013, following Mr. Goethe’s purchase of GR8-801. Since being back with Cluxton at Grand Touring Cars Inc., the car has been gone through entirely. Chassis 802 was expertly demonstrated at the 2014 and 2015 Rolex Monterey Motorsports Reunion in the capable hands of two-time 12 Hours of Sebring winner Marino Franchitti.

Available now directly from the Mirage constructor and period owner, wearing its original and iconic trademark Gulf Oil racing livery, this sorted and amazing-to-drive Group 6 Legend of Le Mans is accompanied by a host of documentation and spares including, but not limited to, its ZF and Hewland transaxles, and three sets of mounted wheels with tires. Chassis 802 provides eligibility to many of the world’s most desirable events. After 43 years, Mirage GR8-802 is still thrilling to hear, watch, and drive, and the next owner is in for the ride of a lifetime.

Also still available for a limited time only: