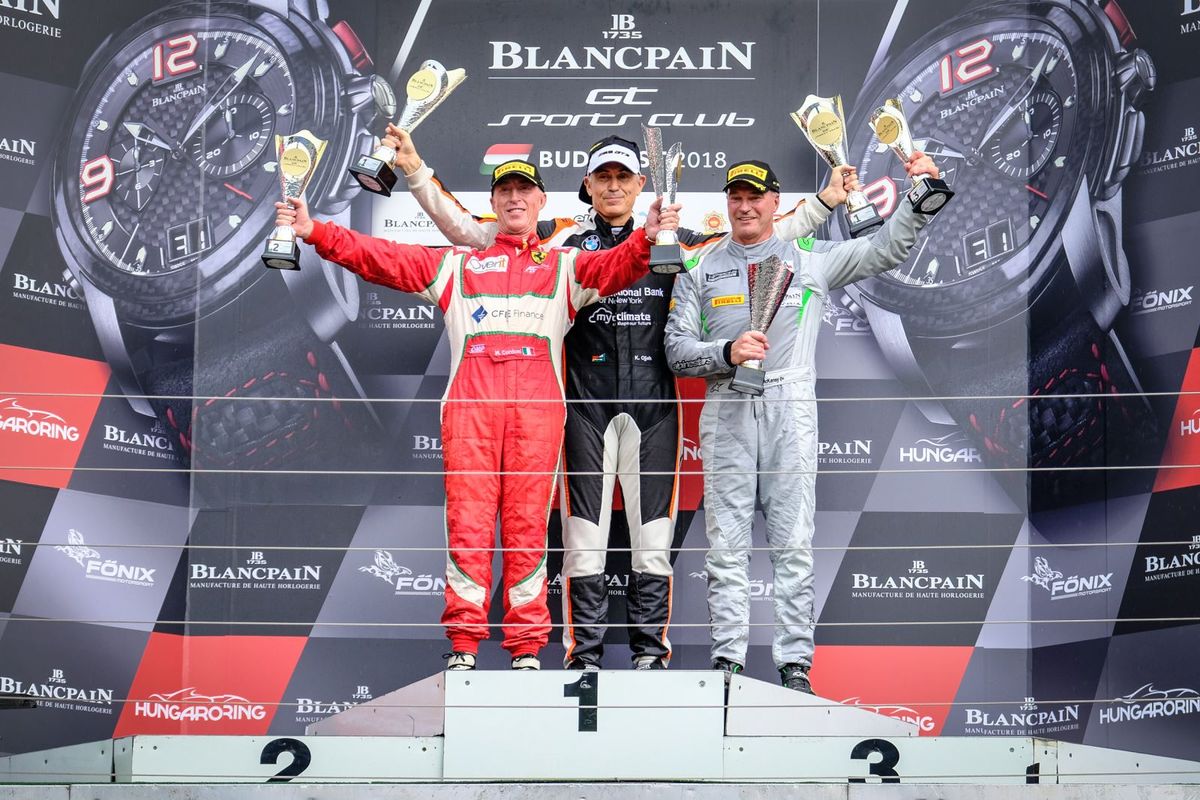 In the Iron Cup, Stephen Earle (#111 Kessel Racing Ferrari 488 GT3) made sure he took the title battle with Klaus Dieter Frers (#3 Artega Rennsport Ferrari 488 GT3) to the finale at Barcelona, after soaring to class victory in both races.

Sunday’s 40-minute Main Race got underway behind the safety car, with most of the grid opting to start on slick tyres despite the damp conditions. After a few laps, the track was deemed dry enough to go racing as pole-sitter Mario Cordoni (#70 AF Corse Ferrari 488 GT3) led the field away.

After being stuck behind Coach McKansy (#17 HP Racing International Lamborghini Huracan GT3) for much of yesterday’s Qualifying Race, Patrick Van Glabeke (#488 AF Corse Ferrari 488 GT3) and Karim Ojjeh made short work of the German, both passing him at Turn 1 on separate occasions.

However, Patrick Van Glabeke’s hopes of a first win of 2018 were ended when he spun at Turn 13, with Karim Ojjeh unable to avoid the stranded Ferrari and clipping the rear wing. The Boutsen Ginion driver was able to continue, whilst the Belgian retired.

Mario Cordoni continued to lead, but was quickly reeled in by the BMW, with his title rival flying around the outside at Turn 2 before pulling a gap to the Italian. From there, Karim Ojjeh didn’t put a wheel wrong, crossing the line to score his fourth win of the season and seal the championship.

Behind him, Mario Cordoni cruised to second place, with Coach McKansy rounding out the podium despite an impressive charge from Angélique Detavernier (#55 AF Corse Ferrari 488 GT3), who recorded the race’s fastest lap as she battled her way from ninth to fourth in drying conditions.

Edward Lewis Brauner (#991 Herberth Motorsport Porsche 991 GT3 R) made his way up to fifth from seventh on the grid, after overtaking both Stephen Earle and Louis-Philippe Soenen (#50 AF Corse Ferrari 488 GT3), who were in a race-long battle for the Iron Cup victory.

The American did just enough to hold off his Belgian counterpart, with the former ensuring the class title battle goes down to the wire in Barcelona after taking his third win of the season.

Collecting his first ever Blancpain GT Sports Club point was Roberto Rayneri (#60 GDL Racing Mercedes SLS AMG GT3), who crossed the line in 10th on his first appearance at the famous Hungarian venue.

Karim Ojjeh, #2 Boutsen Ginion Racing BMW M6 GT3, Overall & Titanium Cup champion: “The excitement today comes from doing a very good race. I think that getting us on slicks and then starting behind the safety car was a very smart move as it took away the uncertainty down to Turn 1. Afterwards it was about getting the confidence. I started getting more and more confident, while the other guys weren’t having their day. I don’t know what it was, but they left the door open because they saw that I was just too quick. The gap grew really quickly as the car came to me and it was really nice conditions to drive in. I wasn’t thinking about the title until about a lap and a half from the end. Before that I was just concentrating, because I really wanted to kick some ass.”

Stephen Earle, #111 Kessel Racing Ferrari 488 GT3, Iron Cup winner: “Yesterday I was losing a lot of time in sector two. We found out that when I was hit by Klaus in the Qualifying Race it put toe-out in my left-rear, which is bad! It makes the car do weird things and it’s also slower on the straight. Otherwise, I just drove like I did in practice. Now the Iron Cup title battle goes to the last race, which is the ideal because everyone’s on the edge of their seat.”