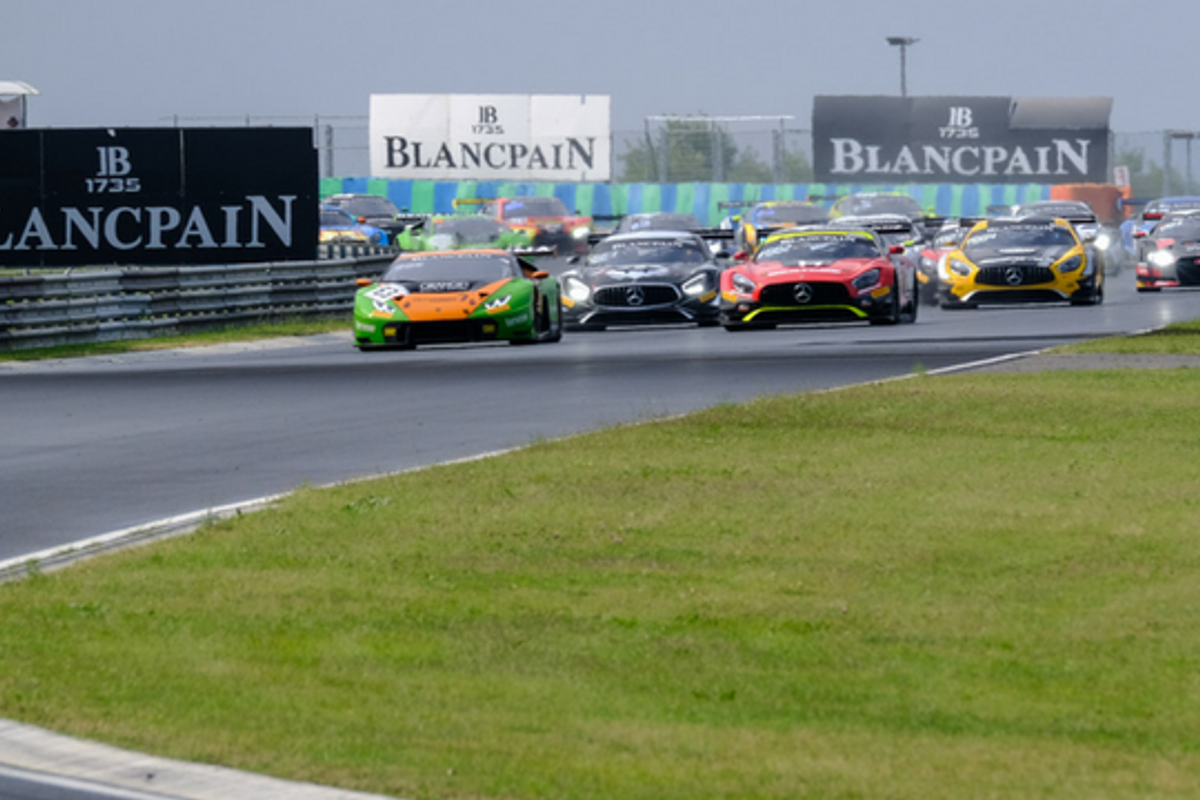 GRT Grasser Racing Team returned to winning ways at the Hungaroring as the #63 Lamborghini Huracan GT3 of Christian Engelhart and Mirko Bortolotti secured a memorable victory from fifth on the grid.

It became clear that the weekend’s opening Sprint Cup encounter would be a dramatic one when a thunderstorm soaked the Hungaroring in the hours before the race.

With the sun quickly drying the track surface the majority of the field elected to start on slick Pirelli tyres, but the drivers were nevertheless heading into unknown territory when the green flag was waved.

Nico Bastian led the pack around on the formation lap in his #90 AKKA ASP Team Mercedes-AMG GT3, while Engelhart took the start from fifth on the grid.

Few would have considered the Lamborghini to be an immediate contender for the lead, but the German ace displayed lightning-quick reactions to get the jump on the front two rows, then had the tenacity to dive up the inside and snatch top spot on the run down to turn one.

A trio of AKKA-Mercedes entries were squabbling for position in his mirrors, with Bastian fighting Nicolas Jamin in the #87 car and Sprint Cup title contender Michael Meadows in the #88.

Engelhart was able to pull away, but there was a surprise addition to the leading pack when Andrew Watson, who had taken the start from 11th place in his 3Y Technology BMW M6 GT3, surged past the three Mercedes cars.

Watson was one of only two drivers to start the race on Pirelli’s wet weather compound. It paid dividends early on, but as the track dried Watson began to struggle. The Northern Irish racer tried to defend, but the trio of AKKA-Mercedes cars had soon moved ahead with Jamin second, Bastian third and Meadows fourth.

There was drama behind them when Alex Riberas spun his #1 Belgian Audi Club Team WRT machine on the start-finish straight while trying to pass the fading Watson. Riberas made contact with the wall and, while he was able to recover to the pits, his race was run. It was a significant moment, as the #1 WRT-Audi crew led both the Sprint Cup and overall standings heading to Budapest.

Out front Engelhart was being caught by Jamin, though the German driver was not threatened for position during his stint. He eventually handed over to Bortolotti with a healthy lead.

Denis Bulatov took the controls of the #87 Mercedes from Jamin and emerged ahead of Raffaele Marciello, who replaced Meadows in the #88. Both Mercedes drivers had a small pace advantage over the Lamborghini, though Bortolotti remained cool at the head of the field.

Marciello edged closer to Bulatov, but the Russian appeared to have second position sewn up. Then, late on the penultimate lap, Bulatov spun and handed the position to the #88 Mercedes. Fortunately he recovered and had built a sufficient gap over P4 to retain his spot on the podium.

Bortolotti was therefore able to bring the #63 Lamborghini home in first spot to secure the Grasser squad’s first Blancpain GT Series victory since the season-opening race at Zolder. Marciello took second while Bulatov was third and clinched Silver Cup honours.

The Pro-Am category was won by Kenny Habul and Tristan Vautier, who were making their first appearance of the season in the #751 Sun Energy 1 by AKKA ASP Mercedes-AMG GT3.

Habul managed the tricky opening laps well and was able to hand over to Vautier with a comfortable class advantage. The Frenchman remained calm to complete the job for the #751 crew.

Tomorrow’s second race will present Marciello and Meadows with an excellent opportunity to further close the gap at the top of the Sprint Cup standings, with the AKKA-Mercedes pair starting from pole position as they go in search of a first Blancpain GT Series win of 2018.

The contest gets underway at 15.30 local time and will be streamed live on the Blancpain GT Series website.

Christian Engelhart, #63 GRT Grasser Racing Team Lamborghini Huracan GT3: “I think the weather was the key today because even with a good start it would have been difficult in the dry. The Mercedes has been really fast all weekend and the same was true for the race in dry conditions. But, in drying conditions, we were quite fast and could pull a gap, so I think that was the key. The second stint was just about staying in front. I’m really happy about the start and the result, especially after some tough times during the season. I’m glad for the whole team that we’re back on top.”

Michael Meadows, #88 AKKA ASP Team Mercedes-AMG GT3: “The first few laps were tricky but good fun. It could have been a boring race if it had been dry from the start. The rain spiced things up a bit, especially when the BMW came past. The key was to not do anything stupid and to let the race come to us, which it did. In the end P2 was the maximum we could get today as it was difficult to catch the Lamborghini. Raffaele did a great job to hold P2.”

Nicolas Jamin, #87 AKKA ASP Team Mercedes-AMG GT3: “We’ve had good pace since the beginning of the weekend. Denis and I are both here for the first time and it went very well. Christian had a very good start but I managed to keep P2 by getting past Nico Bastian. Christian’s pace in the wet was super impressive and I thought he must be on wet tyres! When it started to dry up I could come back at him, then Denis did his maximum and we took a very good result for the team.”

Tristan Vautier, #751 Sun Energy 1 by AKKA ASP Team Mercedes-AMG GT3: “It was a good day for us. Kenny was very fast at the start of the race, running on slicks in the wet, and created a huge gap that I just needed to manage. I was stuck behind a Silver Cup car, which was a bit frustrating, but this was about the Pro-Am result not ego. This was a big day for AKKA ASP Team, with five cars on the podium in total. The guys did an amazing job."