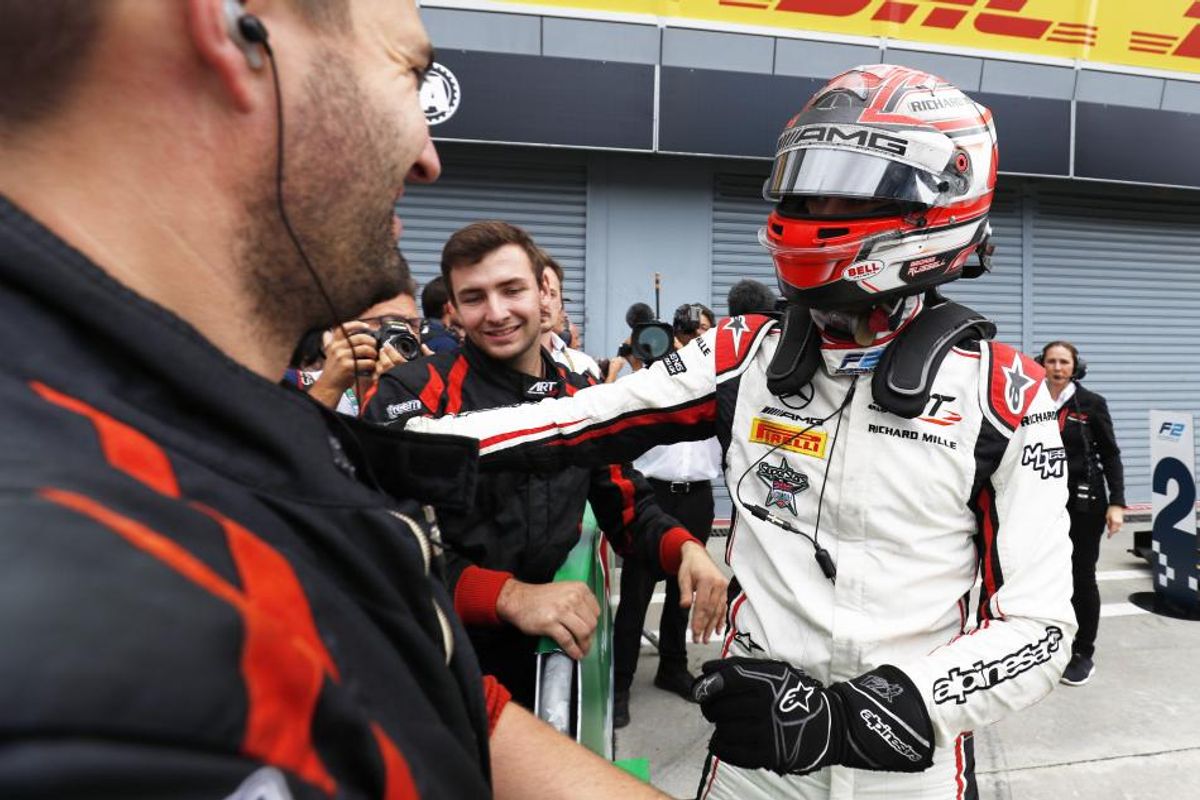 George Russell secured victory in the FIA Formula 2 Championship Sprint Race at Monza, Italy, capitalising on an Artem Markelov lock-up into turn 1 to bag his first race win since Austria. Markelov followed the ART Grand Prix driver home, albeit one second adrift to collect a successive second place finishes. Sergio Sette Camara factored in the battle for the win, and the Carlin driver ended the race in third position.

After a slow getaway, polesitter Ralph Boschung immediately trickled back through the order as Nicholas Latifi – starting from the second row – surged into the lead with Russell and Markelov falling into order behind him. Sette Camara and Carlin teammate Lando Norris also enjoyed strong starts, but were unable to capitalise early on; the Brazilian dropped behind Alexander Albon, while Norris made contact in the opening corners and fell behind Luca Ghiotto and Feature Race winner Tadasuke Makino.

The order over the opening laps was relatively stagnant, and Markelov was given the order to close in on Russell to take advantage of DRS. Meanwhile, Norris moved up the order after Makino endured a large lock-up into turn 1 after just two laps, prompting the Japanese driver to pit for new tyres on the following tour of the circuit.

Russell had caught Latifi on the fourth lap, and looked to pass the Canadian with DRS on their next visit to the start/finish straight. Cruising past with apparent ease, Russell snatched at his brakes and let Latifi back past, while Markelov seized the opportunity to steal through into second place. The Russian then took the lead on the following lap, barrelling past on the straight to give his RUSSIAN TIME team the chance of securing back-to-back wins

Having failed to come back at Markelov, Latifi was now under attack from Russell, who had Sette Camara for company after the Brazilian had dispatched Albon earlier on. Russell launched his attack on Latifi on lap 9, while Sette Camara found it far tougher to dispatch the DAMS driver, eventually making his way past as Albon came under attack from Norris behind them.

No sooner had Sette Camara steamed through into third place, Markelov ahead of them had locked up at the first chicane, taking the escape road which allowed Russell to streak past to assume control of the race. However, the lock-up hadn’t compromised Markelov’s pace and he immediately began to put Russell under pressure – with Sette Camara catching up to the pair to challenge for the lead. At the same time, Albon fell victim to Norris’ pass at Curva Grande, before dropping back with reported technical issues.

Markelov was a constant presence in Russell’s mirrors, but was unable to capitalise on his position with DRS to launch a serious assault on the British driver. A number of opportunities after the median point of the race came to nothing, and Markelov instead elected to drop back to preserve the life in his tyres. This left him under fire from Sette Camara, but the Carlin driver was also unable to find a way past.

With some breathing space, Russell was able to start managing the gap to the cars behind him, especially as Markelov was now occupied by Sette Camara’s advances. Further down the road, Latifi was embattled by Norris, but was inch-perfect in his defense of fourth and refused to concede a further position.

Into the closing stages, Markelov was able to manage the gap to Sette Camara, but was unable to launch a late effort on Russell in a final play for the lead; the championship leader had opened the gap to beyond DRS range, cruising home to clinch victory and extending his championship advantage over Norris to 22 points. Markelov held onto second ahead of Sette Camara, while Latifi absorbed pressure from Norris to secure fourth. Ghiotto took sixth to grab double-points finishes from his home round, while Dorian Boccolacci took his first F2 points with seventh – as Jack Aitken beat Arjun Maini to eighth.

Russell stands at the top of the championship with renewed vigour, his 219 points shading Norris’ haul of 197. Albon remains third with 176. Carlin have 339 points in the teams’ standings, with ART on 281 and DAMS on 249 ahead of the next round in Sochi from the 28-30 September.