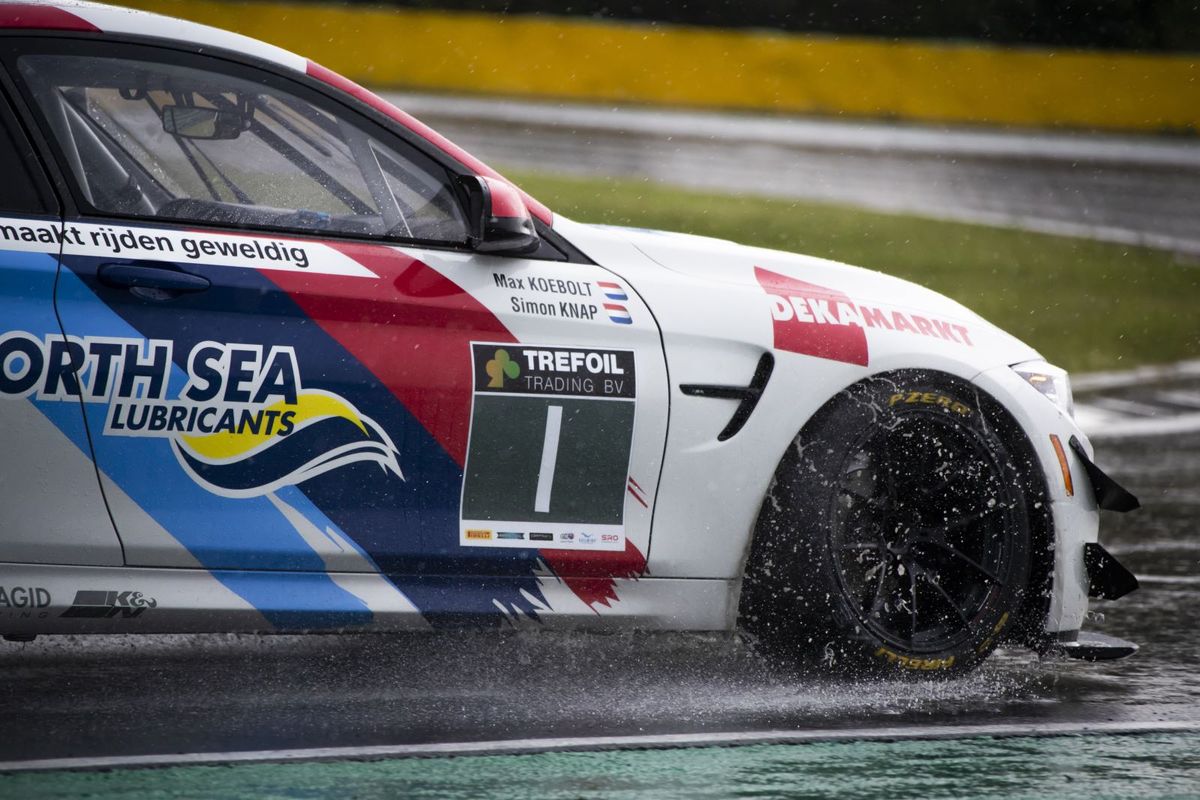 MDM Motorsport drivers Max Koebolt and Simon Knap won the first GT4 European Series race at the Hungaroring after heading the field home in a shortened rain-affected race. A heavy rain shower during the pit window resulted in different strategies and MDM Motorsport's gamble to stay out on slicks eventually paid off when the race was stopped due to the dangerous conditions. Racing One's Jules Szymkowiak and Markus Lungstrass and Allied-Racing's Nicolas Schöll claimed class wins with similar strategies.

Starting on pole, Gabriele Piana in the #111 RN Vision STS BMW M4 GT4 retained the lead and began to pull away from Reinhard Kofler, Florian Janits and Max Koebolt, until the safety car was deployed when Nico Rindlisbacher crashed into the back of the Pro-Am class leading Schwede Motorsport Porsche Cayman GT4 CS MR of Dominik Schraml.

Ten minutes later the race was restarted and soon Janits passed Kofler to take second place behind Piana. Koebolt was right behind the two, waiting for his chance to attack. The first bout of drama then took place when Piana’s teammate Pavel Lefterov hit the #55 HHC Motorsport Ginetta G55 GT4 of Will Tregurtha, which resulted in the retirement of the Silver Cup points leading entry.

The race then took a dramatic turn as rain began to fall just after the pit window had opened. Different strategies resulted in cars staying on slicks or delaying their pit stop, but as the conditions deteriorated race control made the decision to deploy the safety car again. Most teams came in to switch to rain tires, but Koebolt stayed out until the very end and the MDM Motorsport team sent Simon Knap back out again on slicks, hoping for conditions to improve.

Conditions never improved, but fortunately for Knap and Koebolt the race was abandoned after 18 laps with 80% of the total distance completed. As a result, Koebolt and Knap were declared winners, with Gabriele Piana and Razvan Umbrarescu taking second place. Florian Janits and Jakob Schober finished third overall in the #47 Lechner Racing Mercedes-AMG GT4, resulting in a Silver Cup top three overall.

The #24 Felbermayr-Reiter KTM X-Bow GT4 of Gottfried Pilz and Mads Siljehaug finished in fourth place. Nicolas Schöll in the #42 Allied-Racing Porsche and the #77 Racing One Audi R8 LMS GT4 of Jules Szymkowiak and Markus Lungstrass completed the overall top six at the finish.

RACING ONE WINS PRO-AM, SCHÖLL WINS IN AM FOR ALLIED-RACING

Dominik Schraml took the Pro-Am lead on the opening of the race, but his Schwede Motorsport Porsche Cayman GT4 CS MR was taken out of the race by the #87 Team GT McLaren 570S in Turn 1 on lap 4. Nico Rindlisbacher came from behind, went over the grass and hit the side of the Porsche, causing terminal damage to both cars.

This handed the Pro-Am class lead to the #33 Bullitt Racing of Seb Morris, followed by the #77 Racing One Audi R8 LMS GT4 of Jules Szymkowiak. The Dutchman passed Morris on lap 15 and then brought the car into the pits on the next lap to hand over to Markus Lungstrass. Lungstrass stayed on slicks and that gamble paid off when the race was stopped. Schwede Motorsport drivers Marc Basseng and Phillip Bethke finished in second place, scoring important points for the Pro-Am championship, while Alain Valente and Micah Stanley claimed a podium finish for Team GT.

Nicolas Schöll took his first victory in the Am class, having decided not to change to rain tires during the pit window. The Austrian driver had been in second place behind the #27 CMR Alpine A110 GT4 of David Loger, but as the conditions worsened the Austrian team got ahead and claimed the win when the race was red-flagged due to the treacherous conditions.

Autorlando Sport drivers Alessandro Giovanelli and Giuseppe Ghezzi crossed the line in second place, ahead of the #222 Porsche Zentrum Oberer Zürichsee by TFT Racing Porsche of Niki Leutwiler, which means the battle for the Am title will continue in tomorrow’s second race.

Max Koebolt, #1 MDM Motorsport BMW M4 GT4: “It was great. The cars in front of me were fighting hard so I kept some distance initially, but when I could pass them I did immediately. After that the safety car came out when it started to race. We took some risk to stay out longer than the rest and on slicks. We were hoping for it to dry, but it just got worse and we thought our gamble had backfired. Eventually the track was like a river, the race was stopped, and we took first place on our slicks!”

Simon Knap, #1 MDM Motorsport BMW M4 GT4: “All credits go to Max. I only kept it on the track, driving on slicks. The red flag was a great help, to be honest. If we’d had a restart, we would have been at the back in no time or even worse.”

Nicolas Schöll, #42 Allied-Racing Porsche Cayman GT4 CS MR: “We had a good start and I had some good battles and then it started raining. We gladly decided to stay on slicks, came in at the last moment and then when we went back out the race finished behind the safety car. It was a tough race, but the result is unbelievable.”

Jules Szymkowiak, #77 Racing One Audi R8 LMS GT4: “After qualifying we knew our setup for the race was good. Despite a bad start, I think I was a bit too conservative because I wanted to keep the car in one piece, I quickly felt the car was good and I started to attack and work my way to the front. At the end of my stint the safety car came out, but I made the call to stay on slicks. When Markus came out it really started to rain, and we were lucky to have a red flag.”

Markus Lungstrass, #77 Racing One Audi R8 LMS GT4: “This is perfect. I was stressed because the change in the team. I have to thank Martin Kohlhaas that he gave me the opportunity to drive with Jules, who did a superb job without testing. We were super lucky. We gambled, my heartrate was at 200 in the car, but now I’m mega happy.”