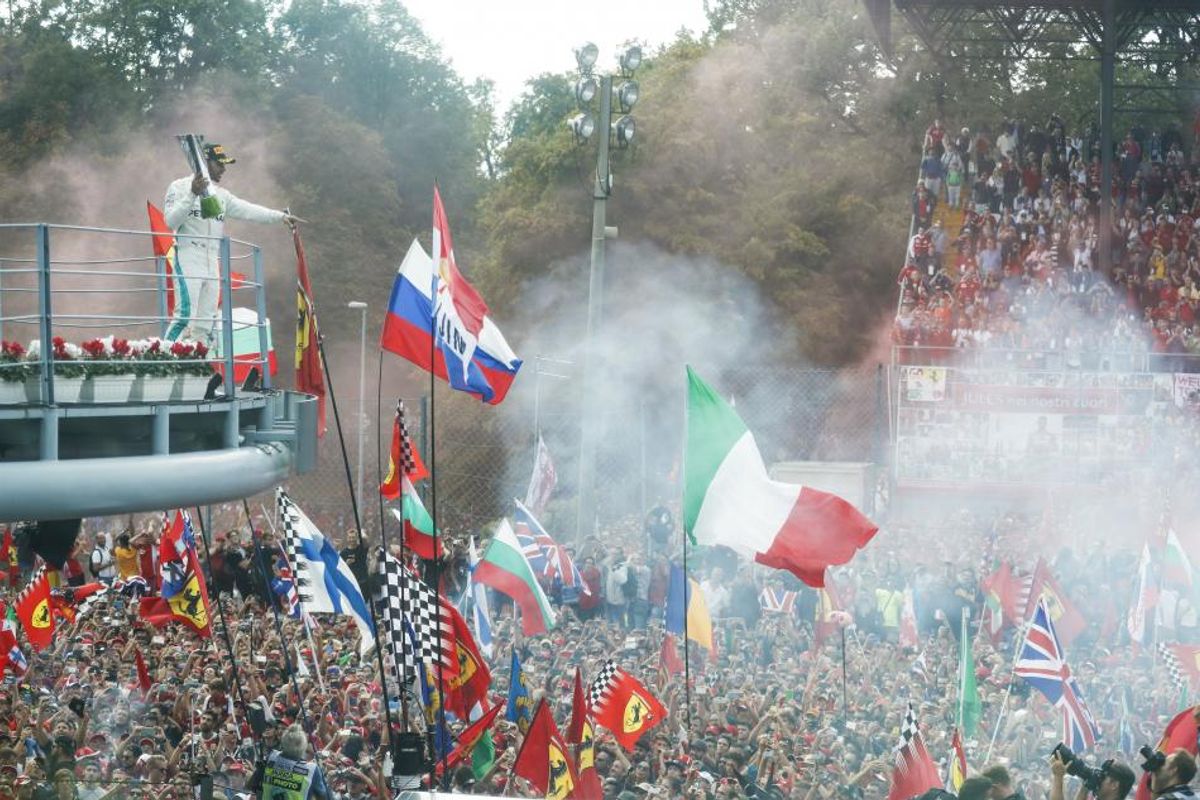 Räikkönen was forced to settled for second place, suffering from tyre degradation, ahead of the second Mercedes of Valtteri Bottas after being passed by Hamilton nine laps from the flag. Vettel finished fourth after dropping to the back of the field following a coming together with title rival Hamilton on the opening lap of the race.

At the start, pole position man Kimi Räikkonen held his advantage to take the lead through the opening two turns. Behind him, though, Ferrari team-mate Sebastian Vettel, who started from P2, was being pressured by title rival Lewis Hamilton and there was brief contact in Turn 1.

Hamilton continued to press and launched an attack around the outside of Vettel’s Ferrari into the second chicane. There was minimal room for manoeuvre and the pair collided, with Vettel being sent into a spin.

Hamilton was able to continue in second place ahead of Red Bull’s Max Verstappen, who had muscled his way past the second Mercedes of Valtteri Bottas as the start, but Vettel dropped to the back of the field.

At the back of the order there was also a collision at the start between Sauber’s Marcus Ericsson and Toro Rosso’s Brendon Hartley. The New Zealander suffered a blown tyres and he was forced to pull over at the side of the track.

That brought out the safety car and under the caution Vettel pitted for soft tyres.

Red Bull’s Daniel Ricciardo also pitted, taking on supersofts, and the pair were soon making their way through the field, with Ricciardo initially to the fore.

When the Safety Car left the track, Hamilton made the most of the re-start and passed Räikkönen into Turn 1. The Mercedes’ driver’s hold on the lead was brief, however, as Räikkönen fought back in the second chicane and muscled his way back to the front.

In the midfield, Vettel passed Ricciardo at the start of lap nine and by lap 17 he had hauled himself up to ninth place, but he was now 27.3s behind leading team-mate Räikkönen

Räikkönen made his sole stop, for soft tyres, on lap 20. Mercedes feinted a stop on the following lap but with his pace good Hamilton was told to stay out.

Behind them, Ricciardo’s race came to an end on lap 24 when smoke began to pour from the rear of his Red Bull. The Australian quickly pulled over and retired, his latest spec Renault engine appearing to let him down.

Bottas finally made his pit stop at the end of lap 35. He took on soft tyres and emerged some 3.5s behind Verstappen. Räikkönen now led again but with worn tyres that were beginning to cause the Finn problems. Hamilton, just half a second behind the Ferrari driver, was on much fresher rubber and began to exert heavy pressure.

Vettel, meanwhile, was busy making his way back towards the leaders after a second pit stop, for supersoft tyres, and on lap 39 he claimed fifth place. He was now 13.4s behind Bottas with 14 laps to go and lapping much quicker than the Mercedes man who was battling to get past Verstappen.

At the front, Hamilton made the decisive move on lap 45. He tucked in behind the Finn on the pit straight and then darted around the outside of the Finn’s Ferrari into Turn 1 to take a lead he would not relinquish.

Behind Räikkönen, third-placed Verstappen Max was now coming under pressure from Bottas. The Finn went to pass in Turn 1 but Verstappen took a very wide line and there was contact, with Bottas being forced to cut the chicane.

The incident was placed under investigation and Max was subsequently handed a five-second time penalty for causing the collision.

After Hamilton took his 68th career win ahead of Räikkönen, Verstappen crossed the line in third, but with Bottas and Vettel within five seconds of the Dutchman, the Red Bull man was classified in fifth place, from where he started the race.