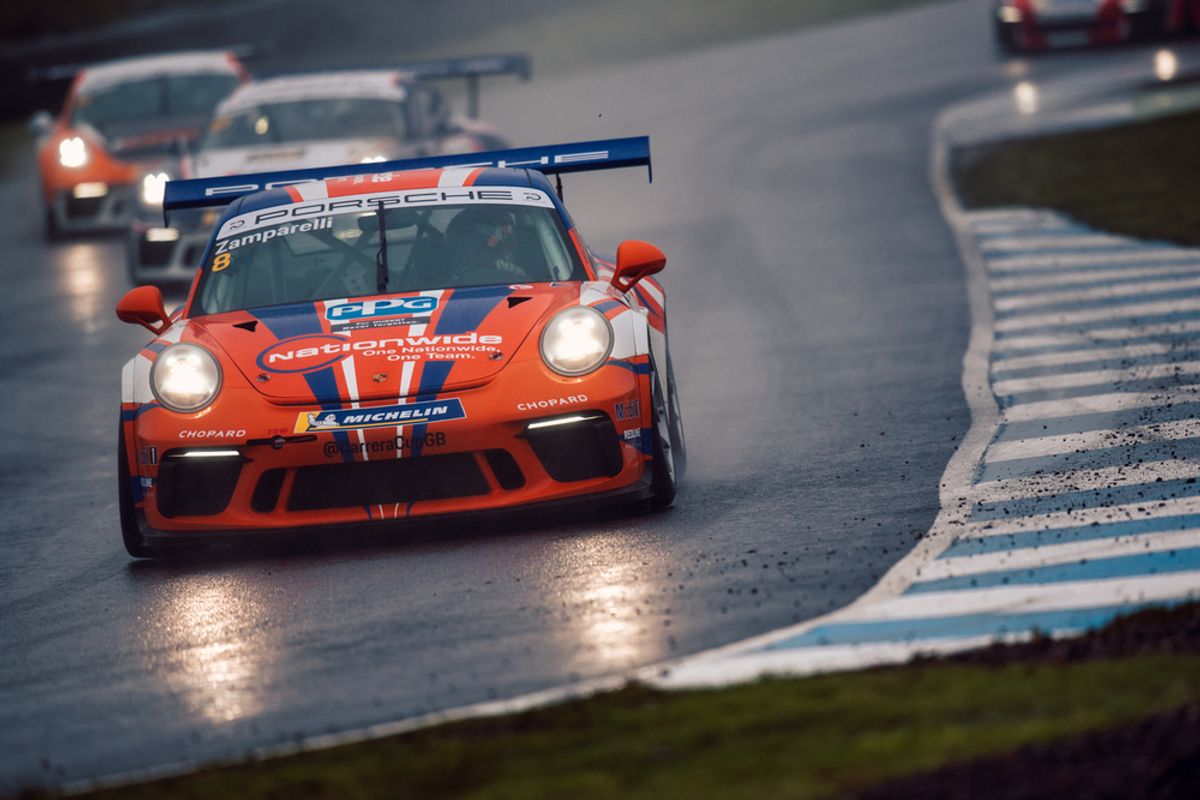 The fastest single marque GT racing championship in the UK, the Porsche Carrera Cup GB, heads to Silverstone with title battles raging in each of the three championship categories – Pro, Pro-Am and Am. All the leading protagonists will head to Silverstone facing the perennial challenge of balancing the need to score consistent points with fending off a competitive pack of 23 cars.

Follwing the previous rounds at Knockhill, both Pro-Am and Am categories have first-time leaders, while Dino Zamparelli (Redline Racing) maintains his slender advantage at the head of the Pro category. With only four races remaining of the 2018 season, Zamparelli and former Formula One test driver Tio Ellinas (Slidesports Engineering) are separated by just five points. Closer still is the battle for Pro-Am honours with two points between new leader Rookie Seb Perez (Amigos Team Parker) and Jamie Orton (JTR) at the top of the table. The ten point deficit between the leaders of the Am category, Peter Mangion (Team Parker Racing) and close rival Peter Kyle-Henney (IN2 Racing) belies the inseparable nature of their season-long battle.

Last time out in Scotland, Ellinas finished on the podium twice to Zamparelli’s once, yet neither driver stood on the top step during a wet and wild weekend of Carrera Cup GB action on the rollercoaster circuit of Knockhill. Going into the weekend four points separated the two former GP3 team mates, the gap only growing by only one point to five. Zamparelli traditionally enjoys the fast and flowing nature of Silver-stone’s National circuit and holds the current lap record, set on his first visit in 2015. However, Ellinas had a strong showing in his first visit in 2017 and will be looking for more in 2018.

Upsetting the desires of Zamparelli and Ellinas to score well at Silverstone are a host of race-winning Pro category drivers, all of whom have impressed in 2018 with at least one victory apiece. With two victories already to his name this season, Tom Wrigley (JTR) currently sits third in the Pro category championship standings, 19 points behind leader Zamparelli. Wrigley has shown frontrunning pace this season, and with a string of podium finishes and a pole position so far, is still in title conten-tion. Should Zamparelli and Ellinas fail to net good points at Silverstone, Wrigley could make the lead battle a three-way fight over the final two races at Brands Hatch.

Lewis Plato (JTR) threatened a podium finish in the first race at Knockhill until the tricky wet weather conditions caught him out and left him with a sixth place finish – going one better in the second race with P5. One of the overall race winners in 2018, Plato has made regular visits to the podium and is locked in a close battle with team mates Wrigley and 17-year-old Porsche GB 2018 / 2019 Junior Dan Harper (JTR) for third in the standings. Going into the Silverstone weekend just ten points cover all three.

Porsche GB 2018 / 2019 Junior Harper has made impressive progress in his rookie season of Porsche racing. At Knockhill, the Irishman put in two spectacular perfor-mances to claim one win from pole position in round eleven and one second place finish following the reverse grid in round twelve. Harper made successful passes on championship leaders Zamparelli and Ellinas, the teenager’s raw speed never in doubt and leaving him heading to Silverstone as the driver most likely to affect the championship outcome.

The only driver to have claimed three victories in 2018 aside from Zamparelli, Rookie George Gamble (Amigos Team Parker) already had victories at Brands Hatch and Monza to his name before he added Knockhill to that list. From reverse grid pole po-sition Gamble negotiated slippery conditions to win round twelve by more than seven seconds. Although it will be Gamble’s first visit to Silverstone National for a Porsche race weekend, Wednesday 12 September will see an exclusive test for every Por-sche Carrera Cup GB competitor which will level the playing field.

Jamie Orton (JTR) had maintained a points advantage in the Pro-Am championship all season, until Rookie Seb Perez (Amigos Team Parker) took the lead by just two points following the last round. Learning race by race, Perez has the momentum but the battle looks highly likely to go down to the wire at Brands Hatch. At Knockhill Perez took two category victories, and on both occasions was joined on the podium by fellow Rookie Dan Vaughan (Motorbase Performance) and newcomer Dan Welch (Welch Motorsport). Vaughan sits just seven points behind Perez in the Pro-Am standings which will provide a fascinating three-way fight at Silverstone.

Rookie Esmee Hawkey (GT Marques) has adapted well to racing in the Carrera Cup GB in her debut season. Hawkey overtook Pro-Am category rival Justin Sherwood (Team Parker Racing) in the category standings at Knockhill, just one point separates them as they prepare to do battle again at Silverstone.

Two talented wild cars will make their entrance at Silverstone, looking to shake up the established Pro-Am order. Sam Brabham, 2015 Porsche Carrera Cup GB Schol-arship finalist, is set to make his Porsche Carrera Cup GB debut, as the 24-year-old returns to competition for the first time in four years with Redline Racing. As the Brabham family celebrates 70 years of racing heritage, the third-generation driver will fittingly return to competition with a livery inspired by the family’s rich racing history. Lining up in Pro-Am alongside Brabham is Tom Jackson, the 22-year-old former Brit-ish F4 front-runner and sports car winner making his Porsche Carrera Cup GB debut with GT Marques.

Following his retirement from race one at Knockhill, Peter Kyle-Henney (IN2 Racing) now trails rival Peter Mangion (Team Parker Racing) in the Am championship by ten points. Mangion may have the momentum with five straight category victories behind him, but the battle is far from over. The two have enjoyed a spectacularly close bat-tle on track all season, with tiny margins separating them in qualifying and during the races. At Silverstone, Kyle-Henney will be utterly determined to outscore Mangion before they enter the deciding weekend at Brands Hatch having lost the title by the most slender of margins twice before.

Iain Dockerill (Asset Advantage Racing) netted two second place Am category finish-es at Knockhill, contributing to a total of six podium results in 2018 including one race victory. Former BTCC racer Richard Hawken (Slidesports Engineering) and double podium finisher at Knockhill, reigning category champion Shamus Jennings (G-Cat Racing) are separated in the championship by just one point ahead of Silverstone. Both will be looking for a strong haul of points in the final four races.

Rookie Gary Eastwood (G-Cat Racing) missed the opportunity in Scotland to add to his existing tally of four Am category podium finishes in 2018 through illness. David Fairbrother (Slidesports Engineering) was also absent at Knockhill, but will return for Silverstone to resume his duel with evenly-matched Rookie Fraser Robertson (Red-line Racing). Rookie Steve Gales (Welch Motorsport) continues to find speed in this, his first season of racing in the Porsche Carrera Cup GB.