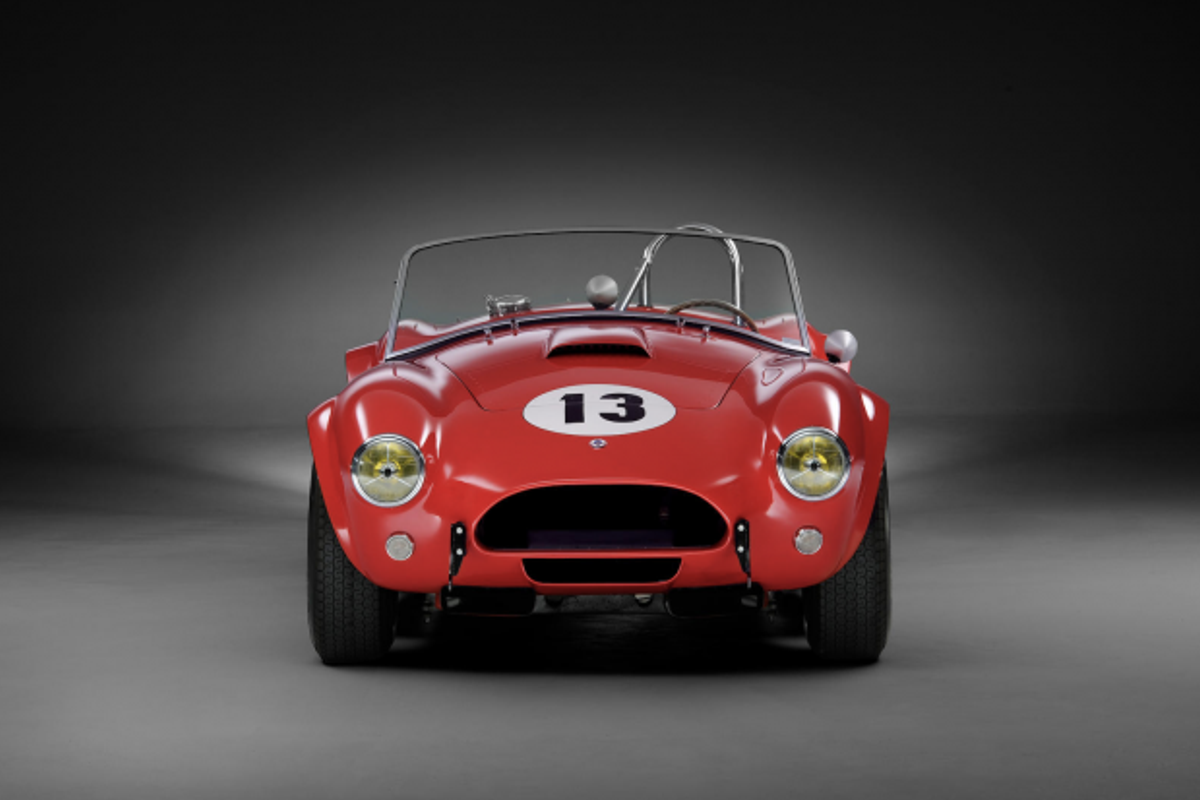 Chassis number 'CSX 2430', is a one of the rarest of all Cobras: a 'Factory-Prepared Competition Car', the latter being the designation of cars prepared to full-race specification by Shelby for the use of favoured privateers, in this case 'Gentleman' Tom Payne. Taken together with the ultimate 'Cobra Factory Team Cars' raced by Shelby American, only 32 of these ultra-desirable works specials were made.

A resident of Ann Arbor, Michigan, Tom Payne was a successful businessman with a passion for motor racing, competing in cars as diverse as an Arnolt-Bristol, Porsche 550, and Formula Junior single-seaters. At one meeting he arrived too late to change into his racing overalls, so drove wearing his business suit and tie, hence the 'Gentleman' nickname. At an SCCA meeting in Michigan he bagged a drive in the Cobra belonging to Dan Gerber and was instantly taken with the car. Within a short while he and Gerber had entered into a business partnership, opening a Ford dealership that later became a Shelby sales point. Payne ordered his first Cobra - 'CSX 2430' - a couple of months later.

Delivered in the summer of '64, 'CSX 2430' remained Ford's property and from the start of the 1965 season was run as a factory-sponsored Shelby American entry. With Payne driving, the Cobra made its competitive debut at the SCCA's Lynndale Farms, Wisconsin meeting on 28th June 1964 and was campaigned throughout the Mid West for the remainder of the '64 season, consistently finishing on the podium. During November, a successful trip to Nassau in the Bahamas saw the Payne/Cobra combination finish 2nd in class in the Preliminary Nassau Tourist Trophy, 5th overall in the Nassau Tourist Trophy, 9th overall in the Governor's Trophy, and 1st in class in the Nassau Trophy Race. In these Nassau races Payne found himself sharing the grid with likes of Roger Penske, Bruce McLaren, Pedro Rodriguez, Bob Grossman, Walt Hansgen, Phil Hill, and A J Foyt – many of them driving out-and-out racing prototypes - so his performances in a road-based GT car are some indication of just how good a driver he was.

Entered by Shelby American, Payne campaigned 'CSX 2430' extensively throughout the 1965 season while at the same time enjoying the occasional outing in a Shelby Cobra Daytona Coupé. He also took the Cobra roadster back to Nassau in November, finishing 3rd overall in the Nassau Tourist Trophy and 2nd overall in the Preliminary Nassau Tourist Trophy. The famed Bob Grossman then got behind the wheel for the Nassau Trophy, finishing 5th overall and 1st in class in a race won by Hap Sharp's Chaparral.

'CSX 2430' then passed into the ownership of John Addison and was raced by him throughout 1966, while next owner Dan Schlames competed with the Cobra at various SCCA meetings in 1967. In the mid-1980s, 'CSX 2430' was owned and raced successfully by Rick Nagel, who won the Texas Vintage Challenge with the Cobra in 1984. This Cobra's owners are listed in the Shelby American World Registry, which also records that 'CSX 2430' is the last Cobra to be raced by Carroll Shelby, who drove it in the Texas Can-Am Challenge in 1984.

In 1985, Nagel sold the Cobra to Steven Volk, principal of the Shelby American Collection in Boulder, Colorado, who commissioned the highly regarded marque specialist Bill Murray to carry out a full restoration. Apart from some minor accident damage, inevitable with an extensively campaigned competition car, the Cobra was found to be in highly original and in very good condition once stripped of its paint. Importantly, the original chassis plate was found to be still in place together with identifying stamps to various components such as the doorframes and the bonnet and boot latches. Not only restored to concours condition, the Cobra was also prepared by Bill Murray for historic racing, which meant incorporating a five-point safety harness, upgraded fuel system (including a fuel cell), different exhaust, and adjustable 'A'-arms. These modern updates have since been removed but are included in the sale.

'CSX 2430' remained on display at the Shelby American Collection for almost 25 years following the restoration's completion. It is featured in Frank Barrett and Boyd Jaynes' book, Shelby Cars in Detail, and also appears in Shelby Cobra by Dave Friedman, AC Cobra by Rinsey Mills, and Cobra – The First 40 Years by Trevor Legate.