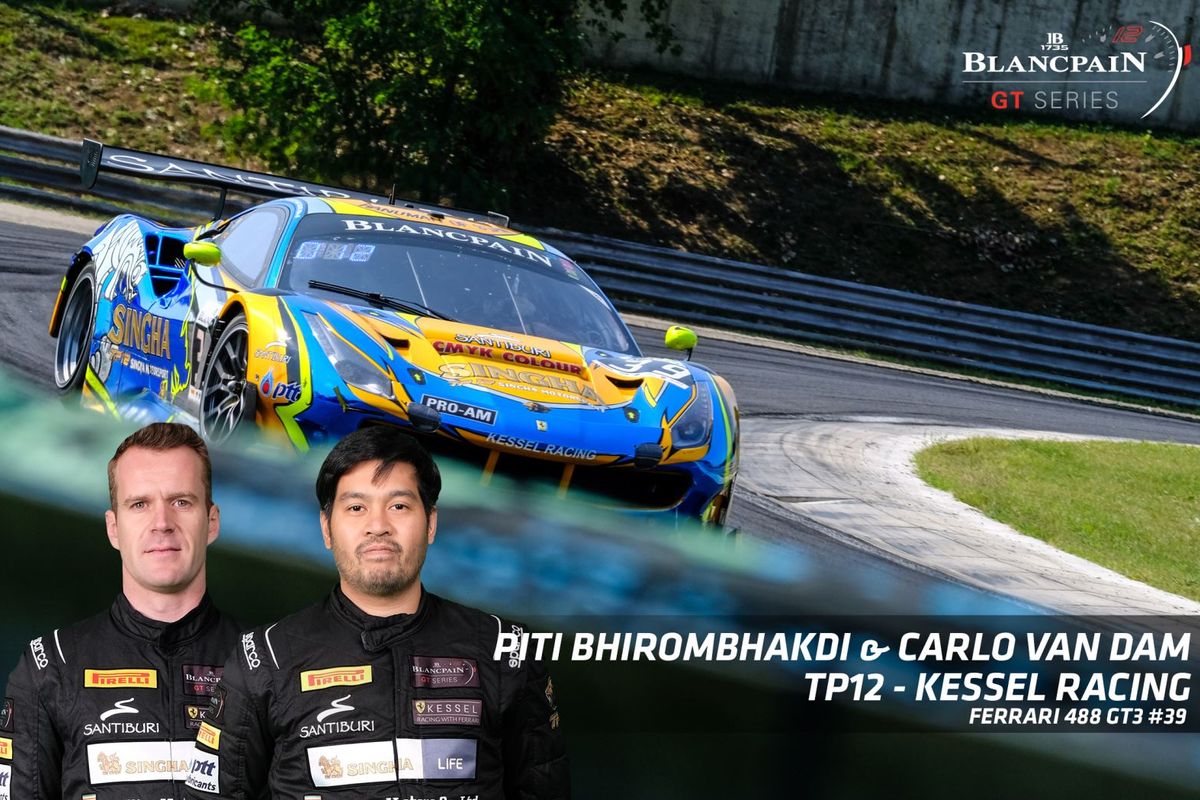 There will be significant interest in the Pro-Am class when the Blancpain GT Series Sprint Cup concludes at the Nürburgring this weekend.

Heading into the finale, the TP 12 Kessel Racing crew hold a slender advantage of just 3.5 points at the top of the standings. If they can maintain their position, it would be a landmark achievement for both Piti Bhirombhakdi and Carlo Van Dam.

For Piti, the team’s Bronze-graded driver, it would represent a remarkable triumph in only his second year of European competition.

And for Carlo, it would complete a return to title-winning ways in Europe more than a decade after he sealed the German Formula 3 championship and packed his bags for Asia.

Piti and Carlo are a typical Pro-Am pairing: one is an experienced professional with junior single-seater titles to his name, the other a successful businessman whose racing career must fit around many other responsibilities.

Piti’s primary commitment is to the Singha Corporation in his native Thailand. A well-known brand at home and abroad, the company was first established by his great-grandfather and remains a family-run concern.

His racing exploits at the international level are a recent development but, as he explains, Piti has a long-standing passion for motorsport.

“I’ve been racing go-karts in Thailand since I was 12,” he says. “My family are motorsport people; my dad raced go-karts and my brother races too.

“It’s kind of normal for Thai people to be racing, because it’s one of the top sports in our country, but to go outside Thailand is something special and something new.”

In 2014 Piti began racing GT3 machinery across Asia. The following season he linked up with Carlo and began a journey that would take him to the other side of the world.

“As well as my racing background, I have a lot of experience in coaching,” explains Van Dam. “I started working with Singha as a coach for their racing teams and Piti was looking for a new teammate. We’d met a few times before, so we joined together and it’s been pretty successful since.”

Carlo has an impressive CV: he won the European Karting Championship in 2001 and later earned back-to-back Formula 3 titles in Germany (2007) and Japan (2008). This suggested a driver of rare talent, but his single-seater adventure all but ended following his 2008 success.

Instead Van Dam built a career racing GT machinery in Asia and, by his own admission, “dropped off the radar a little in Europe.” Ironically, it was through his partnership with a Thai driver and team that he found his way back.

“I discussed it with Carlo and decided that if we were going to be serious about racing, Europe was the only answer,” explains Piti.

“To be honest, I thought it might be a bit too much for me, a bit too competitive, but we decided to go for it.”

They did not take the easy option. In deciding to contest the Blancpain GT Series Sprint Cup in the Pro-Am category, the pair were jumping in at the deep end and hoping that they could swim. To make life a little easier, Piti’s own TP 12 squad partnered with established outfit Kessel Racing, bringing their vibrant yellow and blue livery to the #39 Ferrari 488 GT3.

But even with the support of Carlo and Kessel, every aspect of this experience was new to Piti, who had raced exclusively in Asia before 2017.

“I was new to the tracks, to the weather – everything was new to me,” he recalls. “We travel halfway around the world, so there’s jet lag as well.”

Though Daniel Keilwitz and Alexander Mattschull ultimately dominated the 2017 campaign, Piti and Carlo were frequently their closest challengers. They bagged a maiden class victory in the Zolder qualifying race and concluded the season as Pro-Am runners-up.

The duo returned to the Sprint Cup this season and will travel to the finale with a small edge at the top of the Pro-Am standings. Three race victories and five pole positions from eight Sprint races shows clear progress, but the ultimate test of their mettle will come at the German venue this weekend.

Motor racing is often portrayed as a solitary sport, the driver competing alone once they have pulled out of the pits.

That is rarely true, especially in the Pro-Am ranks. Like any good professional driver, Carlo plays a dual role in this relationship: he does his job on the circuit and works as a coach and mentor off it.

When processing information, he must consider how it will impact his own driving and what it will mean for Piti. In turn, his teammate must soak up all of the data he is given, because Carlo’s advice and coaching could be the difference between victory and defeat.

“Piti has always been a very good driver and I hope that with my ability as a coach he’s lifted his level a notch or two,” says Carlo.

“I know how good he was in Asia. I think gentlemen drivers sometimes have a reputation for not being that quick, but he has surprised everyone from the first race he did last year.”

The stopwatch backs this up. At the Hungaroring, Bhirombhakdi’s pole time in the Pro-Am class was just 1.4 seconds shy of the outright fastest qualifying lap. He was within one second of the eventual race winner and just six tenths shy of a well-regarded former grand prix driver.

Piti believes that Carlo’s input has been vital in allowing him to lift his own game.

“You need a real professional who can improve you in every way,” says the Thai racer. “You need to get faster and make fewer mistakes, because that’s the name of the game in Pro-Am.

“I’ve had a few co-drivers, but you don’t always match in terms of size, in terms of style. Carlo and I are a perfect combination, and I’ve improved a lot thanks to him.”

They are clearly a match when it comes to approach, too, with both men taking their racing very seriously.

“The reputation of a gentleman driver is that they own the car and just come to have fun, but that’s not how it is for our team,” says Piti

“I know my limit and I don’t try to put everything together at once,” he explains. “I go step by step to get to know the track and the car.

“If you go fast one lap but then spin out and have no time for practice, it’s no good. You have to calculate everything and put it into a routine.”

Carlo agrees with his teammate. “I think if you have the right approach and are analytical, you can improve a lot and get quite close [to the pros].

“It’s all about approach, because we’re talking about tenths, about millimetres in setup, about inches on the track, so it takes a lot of commitment. Not a lot of gentlemen drivers can put their mind to it for three or four days in a row.”

From Carlo’s perspective, is there added satisfaction in seeing a driver he has coached improving their performance?

“I’m happy first of all for him!” says the Dutchman. “I hope that I can give him some pointers just before qualifying to get a few more tenths. Pro-Am is a team effort, so the influence you have as the professional can be very beneficial.”

TITLE ON THE LINE AT THE NURBURGRING

Both Piti and Carlo have impressed in 2018. While the Thai driver has shown real progress, his teammate has delivered some stellar qualifying laps to put the #39 Ferrari at the front of the overall order.

But, despite having plenty to be satisfied with, you get the sense that only clinching the title this weekend will make 2018 a truly successful year for the TP 12 Kessel duo.

“Last year we were runners-up, which was more than we expected,” says Piti. “We definitely came back aiming for the championship and it would mean a lot to me to win in Europe against European drivers.”

Carlo feels the same. “We’ve won races before. We won in Asia, we won in Europe last year and we’ve won multiple races this year. But we’ve never won a title together, so that would definitely be nice after the last few years of work.

“I hope that if we do well our fans and our sponsors will support us to do more great things internationally,” adds the Dutchman.

This is an important aspect of the TP 12 squad. Piti and his crew enjoy huge support from Thailand, so winning the Pro-Am title could be the catalyst for an even bigger programme in the future.

What’s more, TP 12 is more than just a name. While Kessel Racing remains at the heart of the operation, there is also important input from Thailand.

“We have four Thai people with us,” Piti explains. “One is the physio, one works as a technician, one is general manager and one is assisting the technical staff. We’re working perfectly together.”

The Pro-Am title battle is too close to call, but one thing is certain: Piti and Carlo can count on enormous support from Thailand as they make their final push for championship glory.