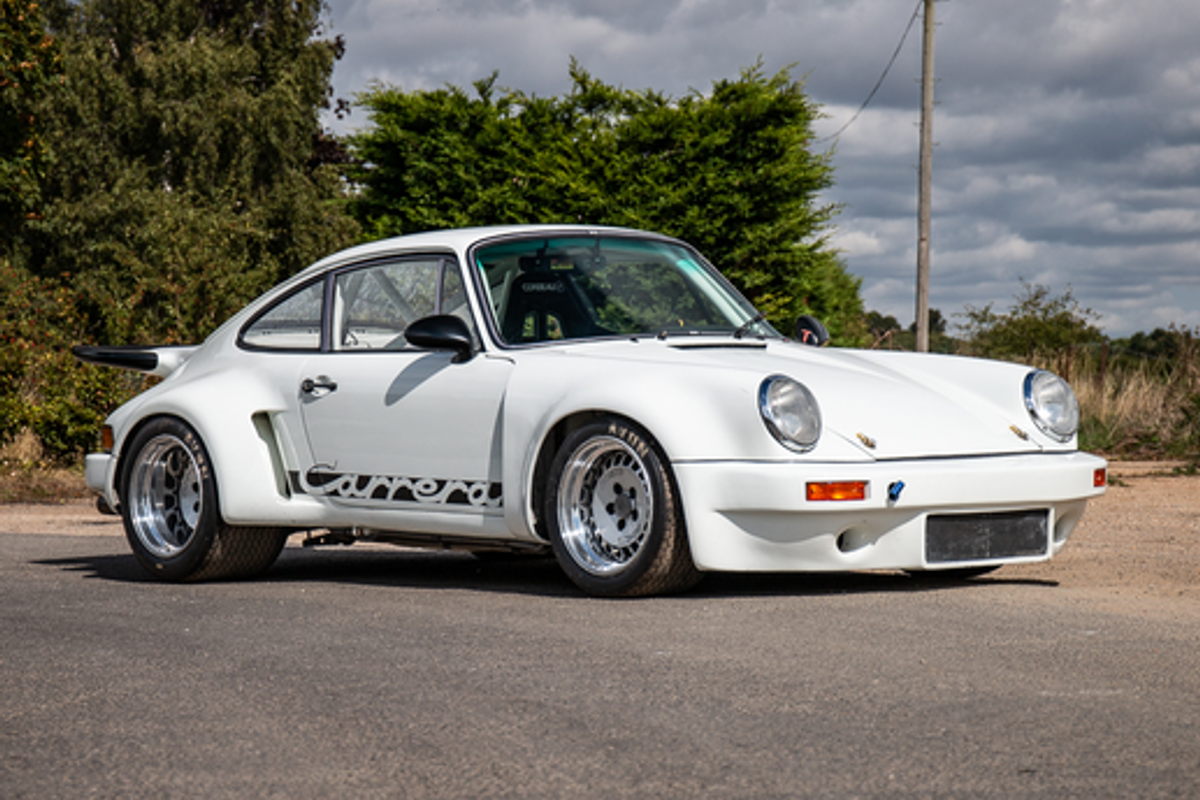 Converted to RSR spec in Germany by race team in-period
Recently updated to obtain HTP papers valid until 2028 (Period H1- 1972 to 1975. FIA Class GTS 27)
Signed off by Jurgen Barth and the FIA in May 2018
917 brakes, RSR suspension, twin-spark heads, MFI
Complete engine rebuild in 2013 and has only completed a few laps of Silverstone since
Previously raced with HTP papers in 2007/2008 at the Spa 6-Hours, Masters series and in Spain & Portugal

For the privateer in the mid-1970s who wanted to go sports car racing, and in particular compete successfully at the famed 24 Hours of Le Mans, there was really only one viable option, the Porsche RSR. Introduced in 1973, the RSR was a factory-built racing car based on the 911 chassis. These were not converted road cars, but rather purpose-built competition models, designed and built from the ground up for motor racing at International level. In 1974, the factory made significant changes to the car including a new 3.0-litre engine, wider wheels with centre-lock hubs and improved aerodynamics. The result was a car that would dominate the GT category and challenge for overall wins around the world for years to come.

The car presented here we believe (from its chassis number 9117300660) began life as a German-market MY 1977 J-programme 911 ‘S’ before being converted in Germany during the 1980s to a full 3.0 RSR race car-spec by a professional race team.  It went on to race with HTP papers in circa 2007/2008 at the Spa 6-Hours, in the Masters Series, World Sports Cars, and in Spain and Portugal.

We understand that in 2013, the engine was completely rebuilt by AWS Engineering at considerable expense, including new rings, new bearings, new valves, new rod-bolts and new crankcase studs. The correct injection system was also fitted.

The car was acquired by our vendor from Andy Bruce (who himself bought the car in 2015) and has been vastly improved.  We are informed that the car now has all the correct components/specification worthy of an RSR, including 917 brakes, RSR suspension, twin spark heads, MFI etc.

Our vendor has spent a considerable amount of money on the car to obtain HTP papers which are valid until December 2028 (Period H1- 1972 to 1975. FIA Class GTS 27).  The FIA rules have become very strict, so the car was thoroughly prepared accordingly by ‘Roger Heavens Racing’ with the fitting of a new period-correct roll cage and correct rear spoiler, and was happily signed off by Jurgen Barth and the FIA in May 2018. Other updates include a new Corbeau driver's seat, a new Willans fuel bladder (dated until 2021), a new exhaust and manifold, brand new Avon Historic Tyres, and a sympathetically retrimmed dashboard.

If International racing is not for you, then this amazing car may well be eligible for some UK championships or even the occasional hill-climb or sprint and represents incredible value for money given the price of a factory original RSR. This is quite simply a stunning Porsche 'racer' in every respect and is not to be missed.