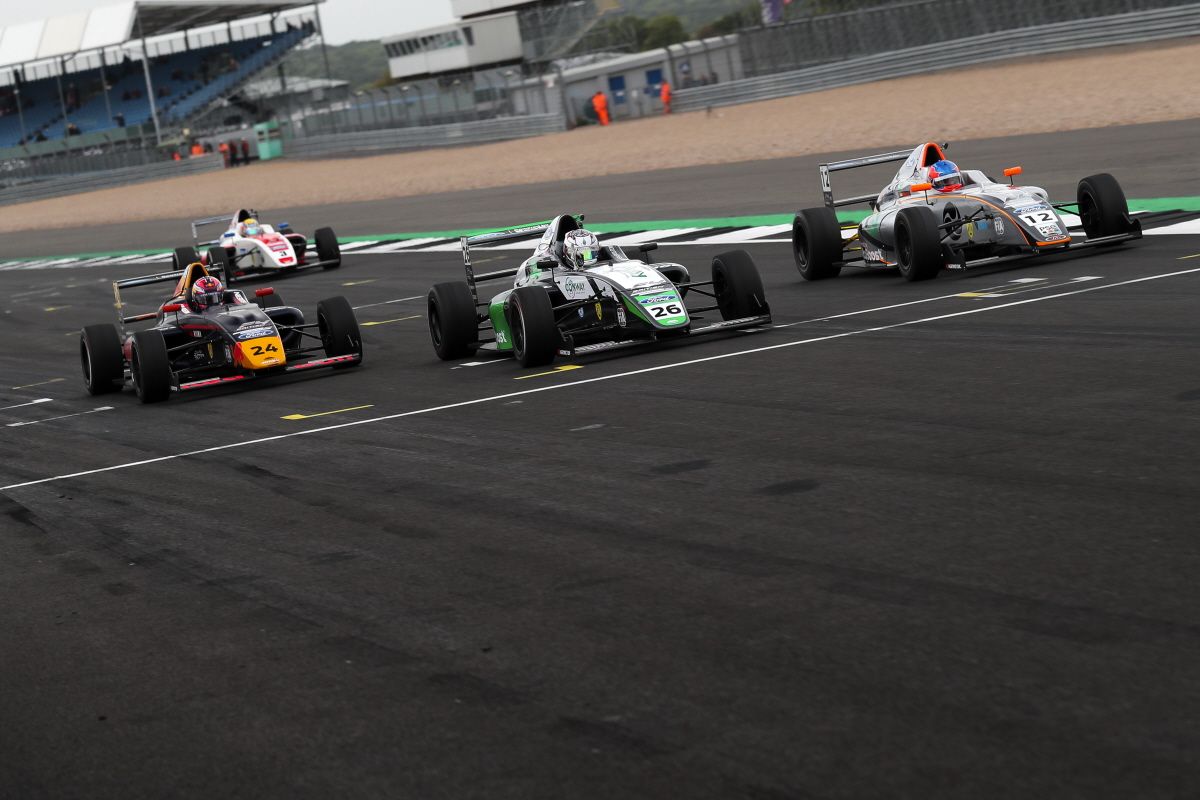 British motorsport star Kiern Jewiss tightened his grip on the F4 British Championship certified by FIA powered by Ford title battle at Silverstone National Circuit over the weekend, 15th/16th September, to open a lead of 62 points for Double R Racing with just one event to go.

Ahead of the 2018 season finale two weeks from now at his and the Woking squad’s home track, Brands Hatch Grand Prix Circuit, Maidstone racer Jewiss chalked up yet another huge haul of points with second place in round 25, third in round 26 and second again in round 27 to double his lead.

Paavo Tonteri and Sebastian Alvarez encountered a mixed weekend in Northamptonshire, but both still managed to come away with more Rookie Cup silverware – Tonteri taking third place in class in race one on Saturday afternoon, with Alvarez finishing third in race three on Sunday.

“Anything can still happen, so none of us are counting our chickens, but it’s been a fantastic weekend for Kiern and the championship and we’re obviously going into the final rounds at Brands in a much stronger position than the one we arrived at Silverstone with”, reflected Double R team principal Anthony Hieatt.

“Yet again, Keirn did an incredible job in all three races and showed we definitely had the pace to win, but there was no need to take any undue risks this weekend. Paavo and Sebastian both encountered some misfortune across the three races, but more trophies are always welcome so it was great to see them both on the Rookie podium. It all comes down to Brands now in two weeks.”

Jewiss takes big stride towards British F4 crown at super Silverstone
Saturday morning’s qualifying session couldn’t have been more hotly contested in the battle for pole position, with Jewiss only just missing out on the fastest time by a miniscule 0.012 seconds – his best lap a time of 56.969 seconds (103.66mph). Tonteri was less than 0.2 seconds shy of his team-mate to end the run fifth quickest while Alvarez was just 0.3 seconds shy of pole, lapping 10th fastest.

Round 25 later in the day began well for Jewiss with the championship leader maintaining second just behind pole-starter Johnathan Hoggard. Thereafter, the pair were never separated by more than a few tenths of a second for the entire 21-lap duration.

Circulating nose-to-tail throughout, Jewiss very wisely settled for the runner-up spot ahead of his chief title rivals and he confirmed his pace being the only driver to lap below the 57 seconds barrier with a time of 59.926 seconds (103.74mph) – quicker than his best lap in qualifying.

Tonteri wasn’t able to put together the start he wanted and a sluggish getaway meant he ended the first lap down in ninth place. In a race where overtaking was at a premium, the Finnish driver was still able to break into the top eight – third in the Rookie Cup – on lap three but then spent the remainder of the contest bottled up behind Manuel Sulaiman. Just 0.3 seconds split them at the flag.

Mexican racer Alvarez concluded the opening lap in 10th position but on the fourth tour he was edged back to 11th place. For the rest of the encounter he remained in situ but did pressure Lucca Allen, ending the race only 0.4 seconds behind his rival – fourth in the Rookie class.

Round 26 on Sunday morning started dramatically for Alvarez, who began the race 11th on the grid, when a multi-car tangle heading into Copse at the beginning of lap two resulted in contact with the barriers and instant retirement.

Triggering the deployment of the Safety Car for several laps, when racing resumed on lap eight Jewiss was the highest placed Double R driver in sixth – he started the race fifth – with Tonteri in 10th position, having been edged back from eighth on lap two.

Tonteri moved ahead of Sebastian Priaulx after the re-start to take ninth as a great battle ensued but, soon after, the Finnish racer had to pit with a slow puncture. Although rejoining the contest, he retired to pitlane a lap later.

All Double R hopes, therefore, rested with Jewiss and he didn’t disappoint with an eye-catching performance. Holding sixth after the re-start, the British driver swarmed all over the back of Hoggard and looked every which way to try and make the breakthrough.

Attempting to pass at Brooklands with every lap, Jewiss couldn’t quite find the gap he needed but on a remarkable final lap he delivered a breathtaking conclusion. Getting alongside Hoggard into lap 19 to pass for fifth, he then closed on dueling podium contenders Dennis Hauger and Ayrton Simmons.

As they diced into Luffield for the final time, Jewiss brilliantly seized his opportunity by sneaking to the inside and on the drag out of the corner – where there was some wheel-banging – through Woodcote to the finish line the points leader managed to seal a superb third place result by a mere 0.006 seconds from Simmons, Hauger just 0.084 seconds further adrift.

From the front row of the grid in the final race of the weekend, round 27, Jewiss made a good start to maintain position and third placed starter Tonteri did likewise as the Double R cars ran line astern through Copse.

Into Becketts, though, a slight lock-up for Tonteri delayed both he and his team-mate and they lost significant ground as a result. Jewiss was able to battle back into fourth place by the end of the lap, while Tonteri slipped all the way back to 13th position.

Closing behind third placed Simmons and pressuring, Jewiss made his move on lap seven at Luffield when his rival went slightly wide and the Double R man sliced up the inside. As the top two battled fiercely over the lead, Jewiss was able to close and by lap 15 the trio were nose-to-tail.

Making his presence felt, Jewiss took second into Brooklands with a terrific move and he bettered his own fastest lap as he set about trying to depose race leader Hoggard. Try as he might during the closing stages, Jewiss had to settle for second position by a mere 0.3 seconds at the chequered flag.

After his initial dramas at Becketts on lap one, Tonteri was also involved in a tangle at Brooklands later around the lap which dropped him down to 13th place overall. Battling back through, he climbed into the top eight but a late skirmish led to a damaged front wing and he ended up 10th.

From the sixth row of the grid, Alvarez more than made amends for his earlier disappointment. After moving into the top 10 initially, he soon climbed into ninth and on lap 10 moved past Simmons with a great pass. Then taking seventh, he soaked up pressure from the recovering Tonteri and went on to record his fourth Rookie podium of the year with third in class.

Brands Hatch Grand Prix in Kent will host the finale of the British F4 season a fortnight from now on 29th/30th September. Next weekend, 22nd/23rd September, the squad’s BRDC British Formula 3 Championship team will be back in action for the next three races of its 2018 campaign at Donington Park Grand Prix Circuit in Leicestershire.