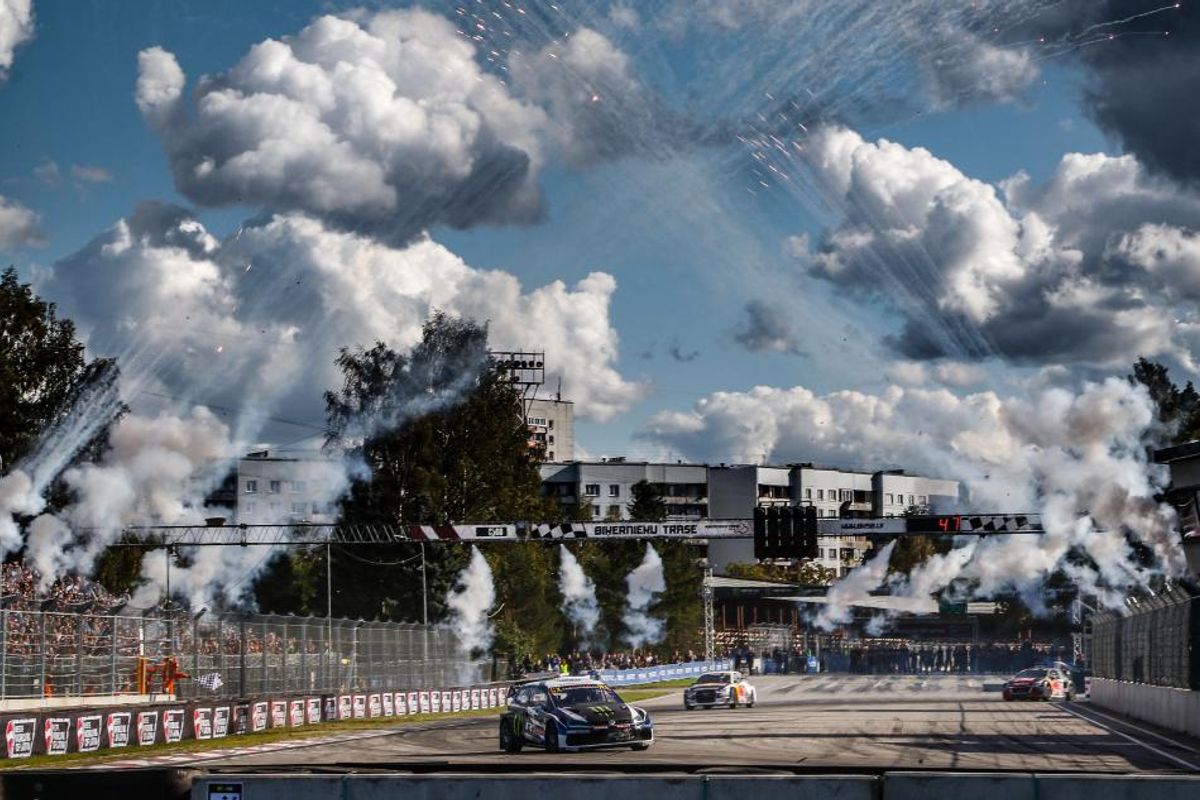 PSRX Volkswagen Sweden’s Kristoffersson took a maximum points score and his eighth win of the season at the wheel of his Volkswagen Polo R in Riga, Latvia’s capital city.

Three manufacturers were represented on the Latvia RX podium with EKS Audi Sport’s Mattias Ekstrom finishing as runner-up in his Audi S1 and Team Peugeot Total’s Sebastien Loeb completing the podium with his Peugeot 208.

Ekstrom also claimed the Monster Energy Supercharge Award for having the fastest reaction time at the start of the final as he moved to second in the race behind Kristoffersson at the first corner.

In the battle for position at turn one, GRX Taneco’s Niclas Gronholm climbed to third. The Finnish driver had a strong race in his Hyundai i20, in which he challenged Loeb for a place on the podium until the chequered flag, equalling his best result of the season so-far from round one at Catalunya-Barcelona.

All three Team Peugeot Total drivers; Loeb and Sweden’s Timmy and Kevin Hansen started the final and the Hansen brothers ran fifth and sixth after the start. Timmy passed Kevin for fifth on lap one, the pair finishing in the same positions at the end of the six laps.

“Mattias (Ekstrom) had a slightly better launch than me in the semi-final but I just braked as late as I could to take the lead and from there on we had a race for the first three laps. I did some mistakes to be honest and after that I was a little but more cautious,” said Kristoffersson. “In the final I had a great launch, we did some small changes on the car between the semi-final and final, it was actually a little bit better so the last one and a half laps of the final reminded me of last year’s win here.” PSRX Volkswagen Sweden also continues to lead the World RX Teams’ Championship.

Ekstrom was happy with a strong weekend in Riga to finish second in the final. “I’m pleased about the solid weekend, we had several good preliminary races and made great starts,” he said. “But I obviously want to win races – and we were very close again here. There are several World Championship rounds still ahead of us and we’ll be fighting just as hard.”

Loeb finished on the podium at the circuit where he won his first World RX final in 2016. “The weekend went quite well. We had a very good Q1, then I struggled a bit in Q2 – I hit a tyre barrier in the fight in the first corner, then after that I had a problem with my front-left suspension so lost quite a bit of time. Finally, Q3 and Q4 were good today. I think we have good pace, the problem for us is that the three manufacturers have nearly the same pace, it’s very difficult to make a difference on the track. I’m happy to be back on the podium for sure.”

PSRX Volkswagen Sweden’s Petter Solberg finished fourth in semi-final one and EKS Audi Sport’s Andreas Bakkerud was fourth in semi-final two. Both GC Kompetition drivers, France’s Guerlain Chicherit and Great Britain’s Liam Doran challenged for a place in the final and finished fifth in their respective semi-finals, but both GRX Taneco’s Timur Timerzyanov and EKS Audi Sport’s Nico Muller were unable to finish their semi-finals after contact. ALL-INKL.COM Munnich Motorsport’s Timo Scheider was first reserve for the semi-finals in 13th, ahead of Latvian star Janis Baumanis.

The final round of the FIA European Rallycross Championship for Supercar also took place in Riga, where Latvia’s Reinis Nitiss won the Championship. Qualifying for the semi-finals put the title beyond the reach of his rivals, Nitiss then finished his season in the best way by winning his home event with a lights-to-flag victory in the final, driving a Ford Fiesta. 2017 Champion Anton Marklund was Top Qualifier in the Intermediate Classification and finished the final third to claim second in the series ahead of France’s Cyril Raymond, who was second in the Riga.

In the penultimate round of the FIA European Rallycross Championship for Super1600, Lithuania’s Rokas Baciuska took a clean sweep, setting the fastest time in each qualifier before winning the semi-final and the final in his Audi A1. Russia’s Aydar Nuriev finished second in a Skoda Fabia and Czech Republic’s Josef Susta was third. Latvia’s Artis Baumanis went out in the semi-finals after a spin at the first corner.

Paul Bellamy, World RX Managing Director for IMG, concluded: “The Latvian round of World RX is always a highlight of the season for drivers, teams and spectators and this year didn’t disappoint. Thankfully we were blessed by good weather and the 29,000 fans that attended were treated to fantastic action over the whole weekend. Congratulations to Johan Kristoffersson on another victory, he is in amazing form at the moment and the results simply don’t reflect how hard he has to work to achieve his success. Congratulations must also go to Reinis Nitiss for wrapping up the Euro RX title with a win in front of his home crowd. Now we have two weeks until a new event on the calendar and World RX’s first visit to the USA at the Circuit of The Americas.”