Nine titles for Audi Sport customers in Europe and Asia 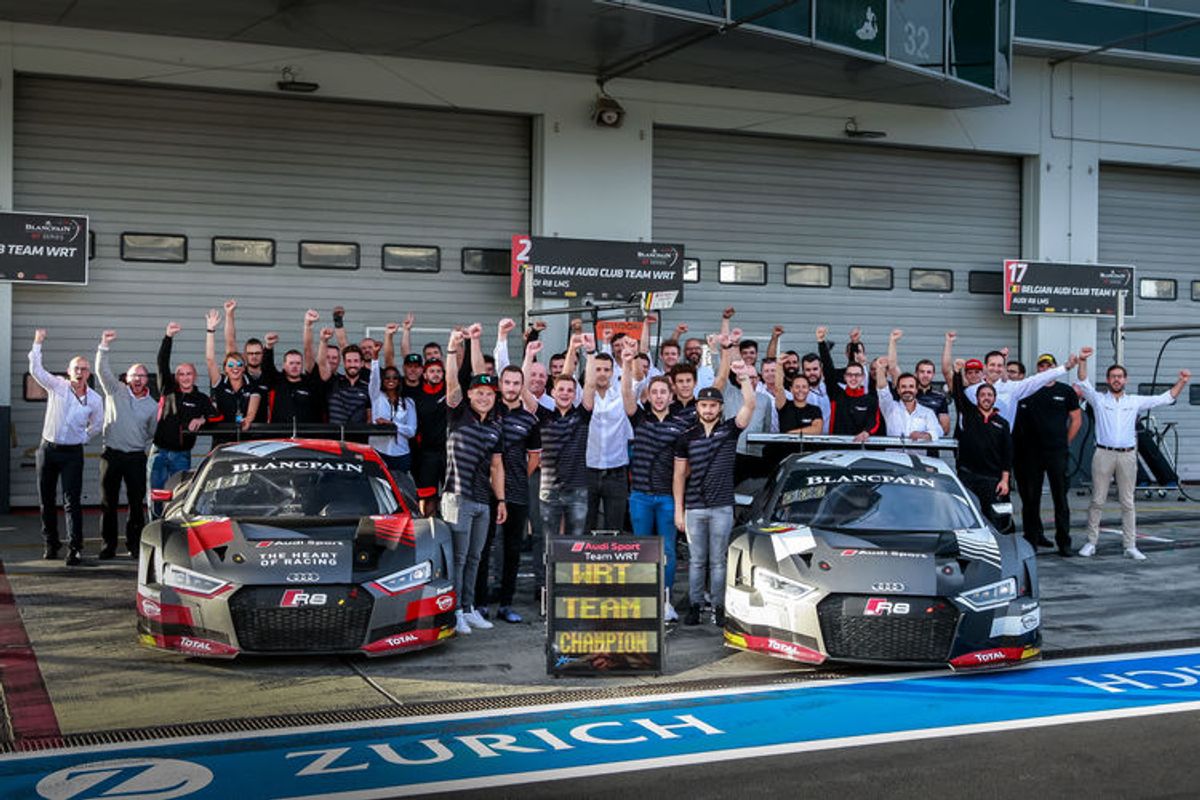 Three titles at the Nürburgring: In the Blancpain GT Series Sprint Cup finale in the Eifel, Audi Sport customer teams won three different classifications. Audi Sport driver Markus Winkelhock and his French teammate Nyls Stievenart in an Audi R8 LMS decided the Pro-Am Cup in their favor. Their fielding team, the Saintéloc Junior Team from France, was at the very front after the fifth and last race weekend in the Pro-Am teams’ classification as well. In the overall classification of the sprint racing series, the teams’ classification went to a squad with the four rings too: Belgian Audi Club Team WRT won this competition ahead of 13 other teams. Vincent Vosse’s squad had prevailed in this classification before, in 2014, 2015, 2016 and 2017. The drivers’ classification remained exciting up until the end as well. Audi Sport driver Christopher Mies and his Spanish teammate Alex Riberas won the first race in front of their fellow drivers Will Stevens/Dries Vanthoor. In the final race, Riberas fell victim to a collision and, after a puncture, only achieved position 16. As a result, he finished the season runner-up together with Mies ahead of Audi Sport driver Kelvin van der Linde and privateer Steijn Schothorst from the Attempto Racing customer team. The best Audi squad in the final race was the Saintéloc Junior Team with Simon Gachet and Audi Sport driver Christopher Haase in third position.

Title and one-two-three-four result in China: On the third race weekend of the Circuit Hero One racing series at Zhuhai, Audi’s customer teams celebrated several successes. Zun Motorsport won Saturday’s race with Adderly Fong from Hong Kong, trailed by the Swiss Massimiliano Wiser from the Tianshi Racing team. Julio Acosta achieved third place with JY Racing, fourth went to the Swiss Alexandre Imperatori from Zun Motorsport. All four drivers raced in an Audi R8 LMS. The Columbian Acosta thus won the drivers’ classification ahead of Fong and Wiser. In the year-end standings of the GTC category for Cup cars, David Chen in another Audi R8 LMS was victorious for the second time in a row. The race on Sunday was cancelled by the officials when the typhoon Mangkhut arrived at the southern Chinese province of Guangdong.

Title successes in toughest European series: Following three titles in America, the Audi R8 LMS GT4 in its maiden season is successful in Europe as well. In its home round at the Nürburgring, Ernst Moser’s Phoenix Racing team with its two junior drivers won the Silver Cup in the GT4 European Series. Dutchman Milan Dontje and Dane Nicolaj Møller Madsen had traveled to the Eifel in third place of the standings. In a turbulent final race with many retirements, the two drivers who were promoted from the Audi Sport TT Cup only needed fifth place to secure the title. The driver pairing celebrated three race wins during the 2018 season. In the Pro-Am classification, another Audi Sport customer was successful with the R8 LMS GT4. Martin Kohlhaas’ Team Racing One with its driver Markus Lungstrass won the driver’s classification and finished the team’s classification in position one as well.

Title success in China: In the Chinese Circuit Hero One racing series, Audi Sport customers achieved a perfect finale. Filipe Souza from Team Champ x TA won the TCR classification on the third race weekend at Zhuhai in front of Billy Lo from the Tianshi Racing team. Both drove an Audi RS 3 LMS. Billy Lo’s podium finish also earned him victory in the class championship of the racing series ahead of Filipe Souza.

Two podiums in Portugal: Francisco Carvalho in an Audi RS 3 LMS clinched two podium finishes on the third race weekend of the TCR Portugal. On the Braga circuit in the north of Portugal, he achieved second place in race one and in race two crossed the finish line in third.