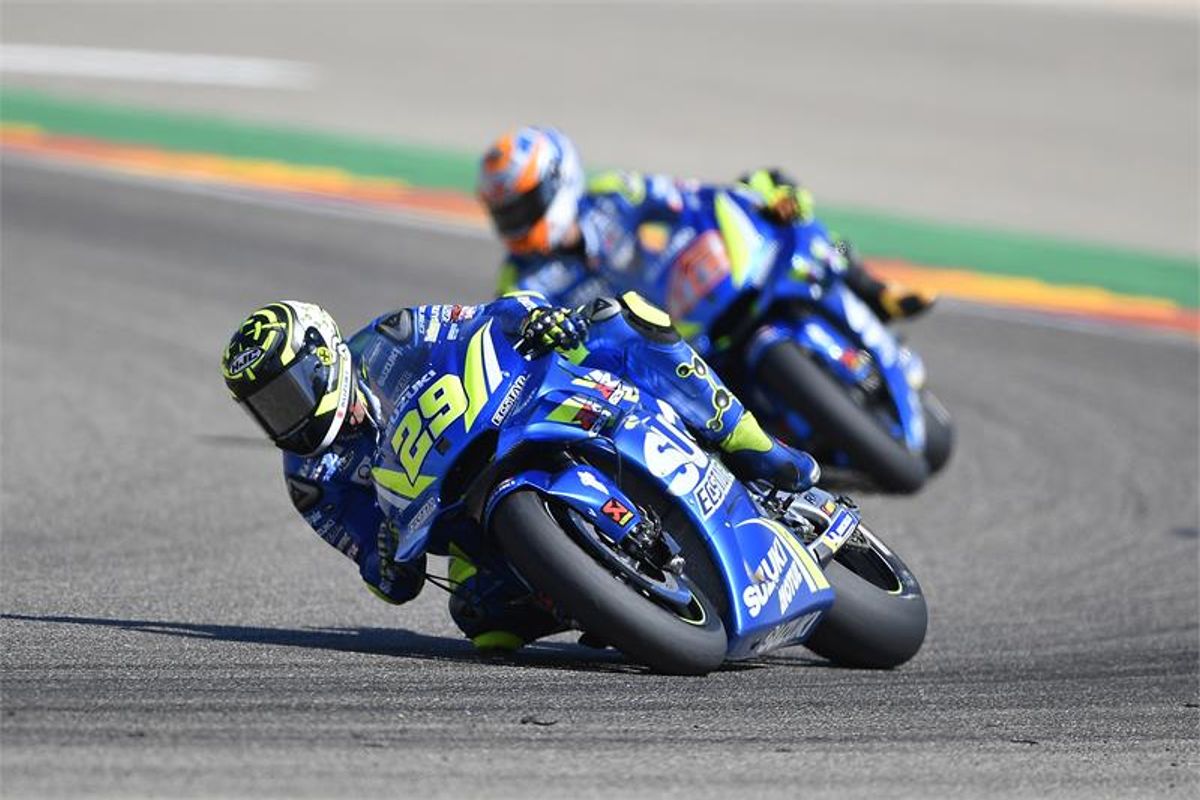 The Aragon GP finally ended with an exciting and solid race for Andrea Iannone and Alex Rins, with the Italian taking third place and the Spaniard following closely in fourth. These brilliant results are the outcome of weekend and day that have been positive overall positive, as both riders showed strong pace at the very technical circuit from Friday onwards. This was further cemented in Warm-Up, which was topped by Andrea Iannone with a fantastic lap despite the Italian crashing in the final moments of the session.

As the race rolled around the large crowd were treated to a boiling atmosphere, with the air and track temperatures extremely high. Tyre choice was critical for the 23 lap race and thanks to the time spent checking different options during practice, Iannone and Rins were able to choose wisely. The pairing got excellent starts their 5th and 9th grid spots and immediately slotted into the front group with 3rd and 4th. The intense and thrilling race saw both riders challenge the race leaders frequently, with Iannone snatching 1st place with just a handful of laps remaining. As the chequered flag flew Andrea Iannone was able to claim Suzuki’s first ever Aragon podium and his third of the season. Local rider Alex Rins continued his impressive form with his second consecutive 4th place.

Ken Kawauchi - Technical Manager
“It was a great race! We haven’t had a fantastic start to the second half of the season, so this result and Misano’s result is very special for us. Both riders did a very good job and were both fighting for the podium. Thank you to all of the team, the riders, and everyone who has developed the bike. Now we have many ‘favourite’ tracks coming up before the end of the season so we’ll try to get more and more good results.”

Davide Brivio - Team Manager
“It’s been a great race for us because we stayed so close to the leaders and we were in the fight for the victory until the very end of the race, so it has been fantastic. It’s great to have both riders so close to the top and we’re very happy. Andrea was really strong and Alex rode very well, they both managed the tyres well and our tyre choice paid off. We’ve now lost the concessions, and it’s a good sign because it shows we’ve become much more competitive. So thanks to everyone here and back in Japan for all the hard work they’ve put in. We’ll try to end the season on a high.”

Andrea Iannone
“I think we’ve done a really good performance today. I started well but Lorenzo had an unfortunate crash and that was a shame to see, it’s always bad to see a crash in front of you. But in any case I’m very happy about my race, I was fighting and pushing at 100% at the end of the race, but only at the end, because in the earlier laps I wanted to conserve the tyres; so I tried to manage the throttle and my riding style because I knew it would be really important to have tyre life in the last laps. I think my strategy worked really well and the team and I have worked hard together. We were losing out down the straight but we’re so happy to return to the podium after some disappointing races.”

Alex Rins
“I'm very happy and the weekend has been very productive for the whole team. The race has been a very nice fight. I have learnt a lot battling in front and following Márquez and Dovizioso and also fighting with Andrea. It has been great! This result is good motivation to keep pushing, and especially in Thailand which is a track that I like a lot.”