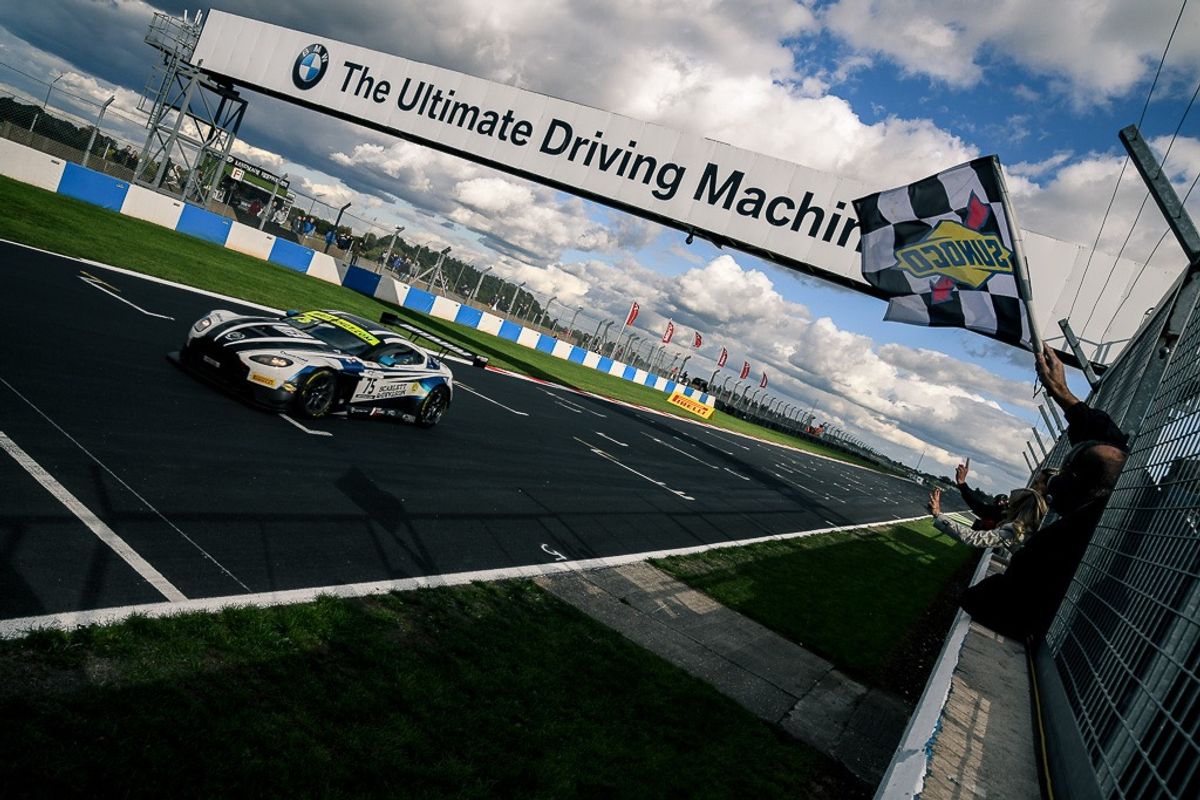 To finish first, first you must finish. That was very much the mantra at Optimum Motorsport as they secured the British GT Championship on Sunday (23 September) at Donington Park with a fine fourth place finish.  The hard work had already been completed ahead of round nine of the championship, meaning a top seven result would secure Flick Haigh and Jonny Adam the drivers’ championship and fourth position after two-tense hours of racing duly brought the team its first GT3 Championship.

Lining up fourth on the grid, Flick made a good start to move up to third position before a high-speed battle for second position followed. Flick opted to let the Jetstream Aston Martin pass for position and tucked in behind, protecting the #75 Aston Martin Vantage as much as possible until the end of her stint.

Jonny took over at the half-way mark as the team served it’s 20-second success penalty carried over from Brands Hatch. He quickly caught the Team Parker entry and after quite a battle, made the pass and then controlled his pace to the final chequered flag of the 2018 British GT Championship season.

Having finished every race started, Optimum Motorsport claimed the GT3 drivers’ title with 167.5 points. While a fantastic achievement, the success is the latest for the team following British GT GT4 titles secured in 2013, 2016 and 2017. The team now look forward to its GT3 and GT4 programme in 2019.

Shaun Goff, Team Principal
“We’re ecstatic with the result. We approached it as we have every other meeting this year with the aim of securing a solid result for more championship points. To win a championship, first you have to finish and that’s what we’ve achieved from every start this year.

“Such is the quality of the package as a whole - the team, the drivers - it means that all of our results have been fourth or better and it’s resulted in this fantastic win. I’m really proud of everyone; we dug in deep and put in all of the extra work needed to make sure we were always fully prepared. So now we look forward to next year… Onwards and upwards.”

Flick Haigh
“It’s been an amazing day and I’m really happy. It’s great for Aston Martin as well as it’s a big result for them too. The Vantage GT3 deserves the win and recognition as it’s seven years old and still fantastic.

“It was a bit wild out there in my stint with a lot of people going for the win. When you’re going for the championship, your mindset alters – even if the team tell you not to think about it – but it does.

“People were knocking into me and I though it would only take one unlucky bit of contact and I could have got a puncture and then it’s game over. I know I could have done quicker lap times, but I couldn’t. I didn’t want to put the car in that situation, so I played it safe and sat behind the Bentley for the last eight or nine laps. I just wasn’t going to risk it and I brought the car back for Jonny.”

Jonny Adam
“I’ve done a few Donington Deciders now and normally they pan out in the first stint and the second stint is quite chilled. So for me, this year it was quite different. The pit stops were quite close and we were sixth at one point and then up to fourth. The problem with the Bentley in front was that he was quite a road block and he was putting me back into the pack, so I then had to be more aggressive. Then he was super-aggressive but once I got by it was a lot easier with still 33 minutes to the end. I started to ease off and relax and not hurt the car too much knowing that fourth was good.

“It’s a wonderful feeling – the third British GT Championship - and I’m really happy for Flick. She’s put in so much effort this year with a massive determination to get the job done with all of the testing, all of the simulator work, everything has come together.

“The team have done an incredible job too – a new customer to Aston Martin – with exceptional car preparation, so it’s nice to see Shaun as GT3 champion so he can attract new customers and hopefully more customers for Aston.”