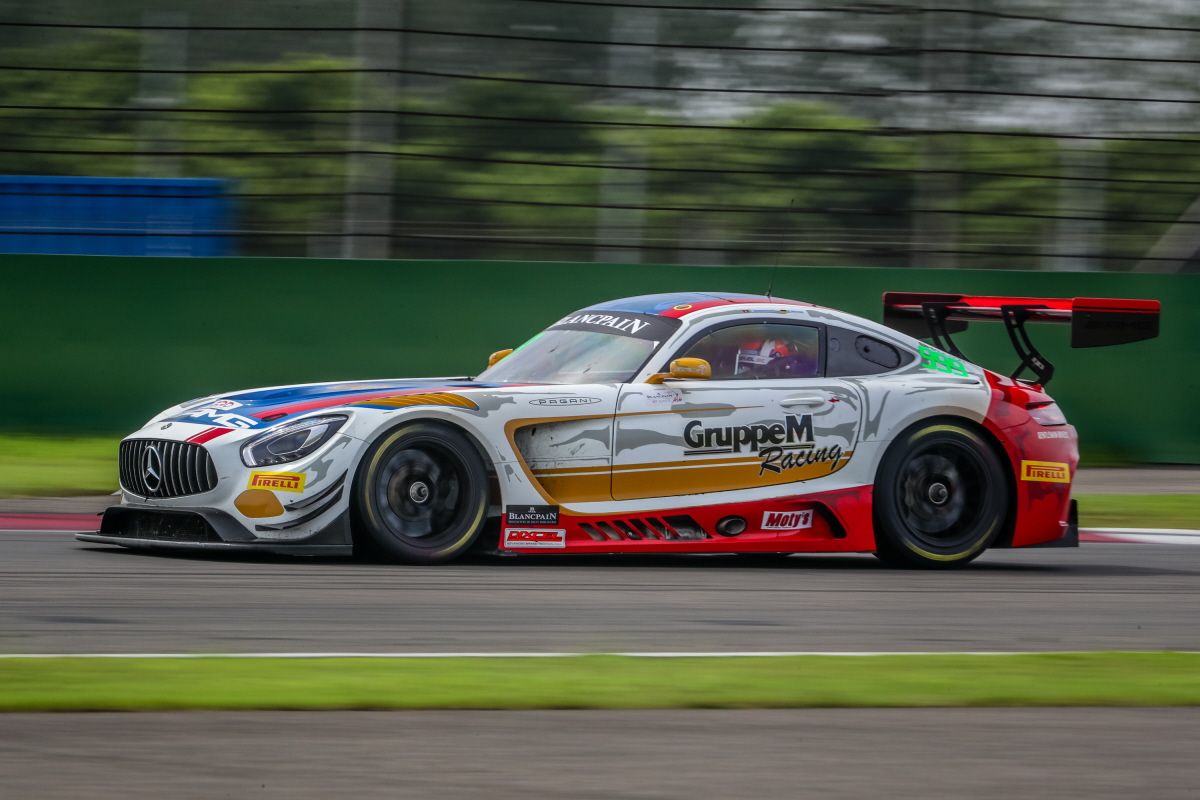 Patric Niederhauser, who had led the GT3 Drivers’ Championship going into the fifth race meeting of the year at Shanghai, concluded the event second in the standings 12 points shy of Martin Kodric and Dennis Lind.

After overcoming an early delay in race one on Saturday, which led to a frustrating top 10 overall finish with team-mate Nico Bastian, the duo posted an improved top five in race two on Sunday, and the No.999 Mercedes-AMG pairing also wrapped-up a Silver class podium with third place.

Race two, round 10, was also the most successful of the weekend for the No.888 Mercedes-AMG of Alexander Mattschull and Raffaele Marciello. In contention for the win for the bulk of the contest, Marciello having led throughout the opening stint, an unfortunate spin late-on for Mattschull led to an eventual finish of third overall and second in Pro-Am.

Victory was achieved in GT4 with championship leader Reinhold Renger in round nine on Saturday, the German and GruppeM Racing newcomer Rick Yoon celebrating a fantastic 15 second success after a strong performance. In round 10, an unfortunate retirement with a battery issue prevented Renger from adding to his tally. He concluded the weekend 11 points clear in the GT4 standings.

Car No.666 – Reinhold Renger (after race one)
“It’s really good to be back on the podium again after Fuji where we were really unlucky, actually. We knew the performance and potential was still there and that we needed to regather at Shanghai. It’s never easy to step in at the last minute like Rick [Yoon] has done this weekend. He drove based on the situation, which gave me a chance to take points from Team Studie and Ringo [Chong].”

Vital points for GruppeM drivers keep title ambitions on track
Since the previous Blancpain GT Series Asia event at Fuji in Japan, where the team achieved a fabulous one-two finish in round eight, GruppeM claimed a memorable victory in the Suzuka 10 Hours and that momentum was carried forward to Shanghai in pre-event practice.

The No.999 Mercedes-AMG, with Bastian at the wheel, ended the second session fastest and almost half a second ahead of the sister No.888 car piloted by Marciello. Following an additional official practice session, in qualifying Niederhauser qualified fourth fastest for race one in the No.999 car while Mattschull had to settle for a frustrating 12th quickest overall, fourth in Pro-Am.

Saturday’s race initially began well for Niederhauser, who moved up into third off the rolling start and also challenged for second into Turn One, but contact between the top two cars resulted in a spin for Franky Cheng’s Audi which badly delayed the GruppeM Mercedes driver. Forced wide in avoidance, Niederhauser dropped to the tail of the top 10 as a result.

By the end of lap one, the Swiss racer was ninth just ahead of the sister GruppeM car of Mattschull who had climbed into the top 10. Due to a stranded Bentley out on track, though, the Safety Car then made an appearance ahead of lap three.

Racing resumed on lap seven and Niederhauser made great progress, marching up the order into sixth before the pit-stop at the end of lap 11. Bastian climbed aboard the No.999 Mercedes-AMG and when the race order settled, bearing in mind the ‘success time penalty’ which the team had to serve in the stop, the German held 10th overall where he finished the race – seventh in Silver.

Mattschull, meanwhile, was tagged by Cheng on lap eight after the Safety Car period which very frustratingly dropped the GruppeM driver out of the top 20. Pitting on lap 11 from 18th place overall, he handed over to Marciello who then made up as much ground as he could during the second half of the contest to eventually finish 14th and seventh in Pro-Am.

In GT4, Yoon started Saturday’s race fifth on the grid and delivered a consistent drive during the first half of the encounter before pitting at the halfway point. Class title challenger Renger then climbed aboard the Mercedes and, free of pitstop success penalties, produced a terrific drive to overturn his chief rivals and move to the front of GT4 and take another victory almost 15 seconds clear.

For round 10 on Sunday, Marciello started the No.888 car from second overall on the grid and the Pro-Am pole while Bastian was ninth on the grid, third in Silver, and Renger lined-up on the front row of GT4 in second place – having just missed pole in qualifying by a tenth of a second.

Making a fantastic launch at the start, Marciello grabbed the lead and a terrific battle ensued with the chasing No.63 Lamborghini of Marco Mapelli. While his advantage was never much more than 0.7 seconds during the early going, Marciello didn’t put a wheel wrong and prior to pitting at the end of lap 16 he had extended his lead to around 1.2 seconds.

Mattschull ventured into the race back in the lead, fractionally ahead of the No.63 car but by lap 23 he had increased the gap to 1.8 seconds. During the latter stages, though, the No.19 Lamborghini of Dennis Lind caught and challenged Mattschull and after a superb three-car battle the GruppeM racer ultimately finished third, second in Pro-Am, after an unfortunate spin on the penultimate lap.

Bastian put together a superb first lap to scythe his way though to fifth from ninth, but on lap six he slipped back to seventh overall. Pitting on lap 12, Niederhauser got behind the wheel of the No.999 and when the order plateaued he was in the top six. Grabbing fifth on lap 21, Niederhauser also secured third in Silver.

After the highs of the dominant win on Saturday, GT4 drivers Renger and Yoon encountered disappointment in race two. Maintaining second position during the early running, and staying in contention throughout his stint, Renger pitted on lap 14 but after just a handful of laps Yoon was forced to pit again due to a problematic battery which enforced retirement.

Ningbo International Speedpark in China will host the finale of Blancpain GT Series Asia next month, on 13th/14th October.