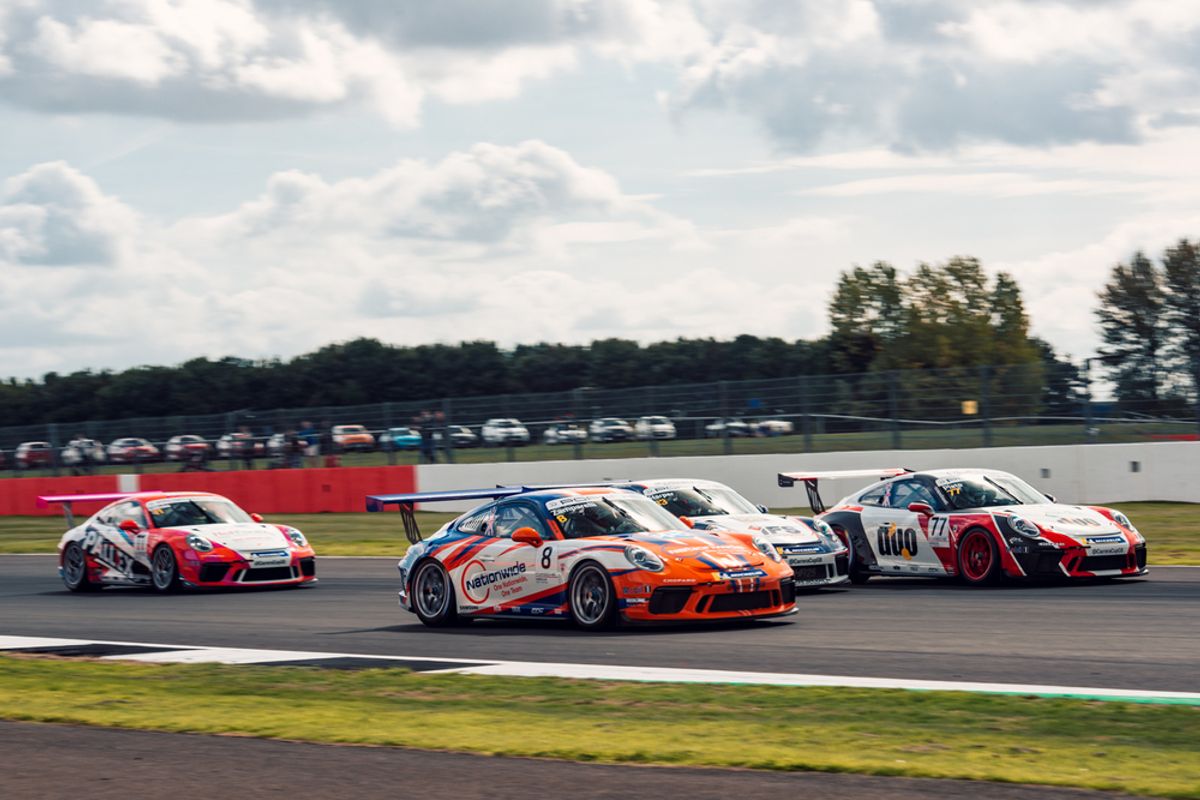 The fastest single marque GT racing championship in the UK, the Porsche Carrera Cup GB, arrives for one finale at Brands Hatch with two exciting additions to the grid and three titles to decide. However, the biggest number of a weekend that will be dominated by calculations is 300 – following round fifteen at Brands Hatch, a landmark 300 races will have taken place since the championship’s inception in 2003.

Despite competing over seven weekends and fourteen races around the UK and in Europe, the 2018 Porsche Carrera Cup GB championship goes down to the wire. In fact, the two final races on the full Brands Hatch Grand Prix circuit will crown champions in three categories – Pro, Pro-Am and Am. George Gamble (Amigos Team Parker) sealed the 2018 Rookie championship two weeks ago at Silverstone, while JTR – in just their second season in the championship – were crowned 2018 Team champions the same weekend.

Dino Zamparelli (Redline Racing) narrowly leads former Formula One test driver Tio Ellinas (Slidesports Engineering) from Tom Wrigley (JTR) in a three-way fight for overall and Pro championship honours. For Zamparelli, who carries an eight-point advantage, to secure the title in round fifteen, the Bristolian needs to outscore Ellinas by just two points – or one place, unless Zamparelli secures pole position.

Either Rookie Seb Perez (Amigos Team Parker), Dan Vaughan (Motorbase Performance) or Jamie Orton (JTR) can claim the Pro-Am championship. Perez holds the advantage, seven points clear at the top of the table, meaning he needs three points over the chasing Vaughan to leave round fifteen as 2018 Pro-Am champion.

Peter Mangion (Team Parker Racing) and Peter Kyle-Henney (IN2 Racing) will settle their season-long Am category battle once and for all, with the odds in favour of the newcomer. Mangion, who arrives with a lead of ten points, only needs to maintain this advantage in his first season to become 2018 Am champion following round fifteen – something which could be aided significantly by securing category pole position.

Two well-known names take their place on the grid

Michael Caine is set for a return to the Porsche Carrera Cup GB grid for the championship’s landmark race, making his homecoming to the Motorbase Performance squad for the 2018 season finale. The 2010 Porsche Carrera Cup GB runner-up will race under the number 300 with a specially commissioned roof design, celebrating the championship’s 300th race and featuring the name of every race winner since the series’ inception in 2003.

After initially joining the grid in 2004, Motorbase Performance competed at the very top of the championship for seven seasons, notching up an impressive 26 race wins in that time – the third highest of any team. 49-year-old Caine amassed a total of 14 race wins – the seventh highest of any driver – before going on to claim the British GT Championship title with Motorbase in 2012 with the Porsche 911 GT3R.

Veteran racer Mike Wilds will make his first Porsche Carrera Cup GB start as the latest chapter in an incredible motorsport career spanning over five decades. Having competed in Formula 1 in the mid-1970s and contested the 24 Hours of Le Mans on eight occasions in the 1980s, Wilds enters the Pro category with Redline Racing for Brands Hatch, a circuit where he made his Formula One debut in 1974. Redline Racing has been a part of Porsche Carrera Cup GB from the outset, and can lay claim to a record nine outright titles and 122 outright wins – over a third of the 300 races.

Both drivers will race as guest entries, making them ineligible to score points.

Pro category championship points leader Zamparelli took victory in race one at Silverstone with Ellinas directly behind him in second, Wrigley in third. Wrigley took a confident win in race two with title rivals Ellinas fourth and Zamparelli fifth. All three drivers have experience of the technical and challenging 2.4-mile circuit in the first-generation 911 GT3 Cup, although Zamparelli alone is no stranger to a title showdown.

In 2017, when Zamparelli found himself challenging for the title for a second time, Ellinas held the advantage in qualifying while each headed the other in the two races. With very little to choose between them, Zamparelli’s eight-point advantage could be the decider. Wrigley’s championship chances may be mathematically slim, but the three-time winner this season – only Zamparelli has more wins in 2018 – will challenge to the last.

Although out of the championship fight, the Pro category remains more closely-fought than ever with ten competitors lining up in Kent. Matching Wrigley with three wins, the first of which was scored in the opening weekend at Brands Hatch, is 2018 Rookie champion Gamble. With only race victory to concern them, Gamble is joined in the hunt by Lewis Plato (JTR) and Porsche GB 2018 / 2019 Junior Dan Harper. Both Plato and Harper finished on the podium in round fourteen following a feisty battle with Gamble, meaning the trio arrives at Brands Hatch with scores to settle and just eight points between them for fourth in the championship.

Tom Jackson (GT Marques) joined the grid for the first time at Silverstone. The former British F4 front-runner showed strong form throughout the weekend and returns to continue his learning curve over the final weekend of 2018.

Perez has established himself as a consistent front-runner in the Pro-Am category as his mounting experience has translated into eleven consecutive podiums and six category victories. Perez has gradually closed a points deficit to Orton during the second half of the season, maintaining his momentum with a victory and a third place finish at Silverstone. His nearest challenger, Vaughan, claimed a victory and a second place, underlining his form and threat to the title hopes of Perez. Having enjoyed the championship lead until Knockhill, Orton suffered disappointing weekends meaning he now sits third in the standings – however, the five-time race winner should not be discounted at a circuit he alone has experience of among the category title hopefuls.

Another experienced driver facing a challenge from a newcomer is Justin Sherwood (Team Parker Racing). Just one point separates the 2014 champion from Rookie Esmee Hawkey (GT Marques) after the pendulum swung in the favour of Sherwood at Silverstone.

A category wild card is the returning Rory Collingbourne, who celebrated his 21st birthday earlier this month and joins Redline Racing for the final two rounds. Collingbourne made his championship debut at the start of 2018 followed by impressive performances across three of the first four weekends. With a tally of four category podium finishes from his first six Porsche Carrera Cup GB starts, Collingbourne is now determined to secure victory at Brands Hatch.

Another returning Pro-Am driver with race-winning form is G-Cat Racing team manager Greg Caton. Four races in 2018 saw Caton take a second place at Brands Hatch in the very first round and, especially in changeable conditions, the experienced racer could prove key to the category battle.

One of the tightest battles on the grid over the course of 2018 has been at the front of the Am category – Mangion and Kyle-Henney have been regularly separated by thousandths of a second in qualifying and mere millimetres in the races. Both Mangion and Kyle-Henney took wins at Silverstone, although Mangion’s advantage in the points table has been earned by an unbroken string on nine podium finishes.

Highlighted by two podium finishes at Silverstone is the late-season form of category stalwart Iain Dockerill (Asset Advantage Racing). A race winner in 2018, Dockerill, untroubled by championship concerns, will be looking to add to that tally. Former BTCC racer Richard Hawken (Slidesports Engineering) is almost guaranteed to take fourth place in the standings from an absent Shamus Jennings (G-Cat Racing), with just three points to find. David Fairbrother (Slidesports Engineering) and Steve Gales (Welch Motorsport) both return to the action once more for the final two rounds.