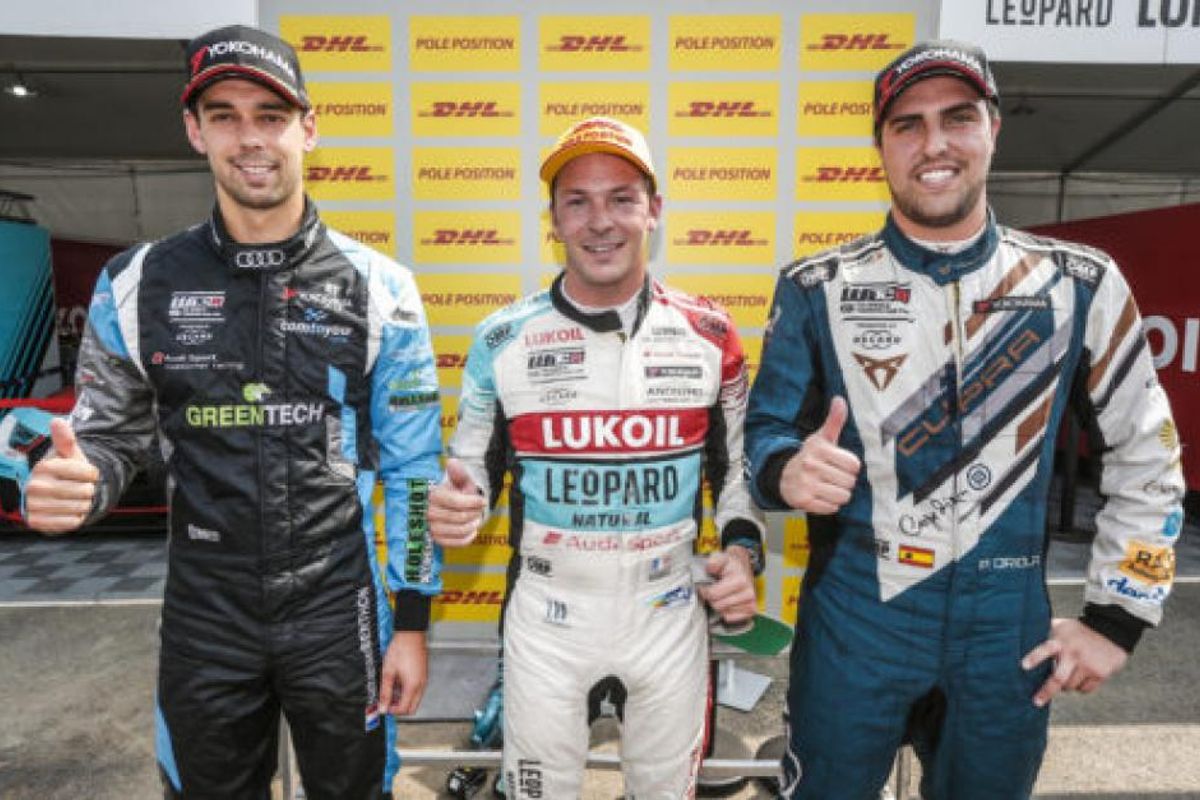 Jean-Karl Vernay claimed the DHL Pole Position for Race 1 at WTCR Race of China-Wuhan after an intense qualifying session in which the top 20 cars in the WTCR – FIA World Touring Car Cup presented by OSCARO were covered by 0.9s at the Wuhan International Street Circuit.

“Great qualifying,” said Vernay after securing his second DHL pole of the season. “I am happy for the team. We had a terrible weekend in Ningbo, so this means a lot. We had a long talk after that about how to improve and get back to the front. Now I will focus on making a good start and lead after the first corner, which would make things easier.”

Comtoyou Racing team-mates Nathanaël Berthon and Denis Dupont were third and fourth in their Audi RS 3 LMSs, while Vernay’s team-mate Gordon Shedden and Frédéric Vervisch (Comtoyou) completed a strong session for Audi in fifth and sixth.

Esteban Guerrieri was P11 in his ALL-INKL.COM Münnich Motorsport Honda, ahead of Aurélien Panis’s Comtoyou Audi and the Zengő Motorsport Cupra of Zsolt Szabó. Sébastien Loeb Racing’s Rob Huff – the only driver with previous experience of the Wuhan street circuit – was a disappointed P14 in his Volkswagen Golf GTI TCR.

To underline the close nature of the competition double Ningbo race winner Thed Björk was the first of the Hyundai i30 N TCR drivers in P17 in his YMR entry, behind Boutsen Ginion Racing’s Ma Qing Hua and Mehdi Bennani’s Golf. YMR team boss Yvan Muller was P18, while WTCR OSCARO points leader Gabriele Tarquini was down in P21.

Tarquini’s BRC Racing team-mate Norbert Michelisz was only P24 but will start Race 1 from the back of the grid in any case following an engine change penalty.

Jean-Karl Vernay (Audi Sport Leopard Lukoil Team, Audi RS 3 LMS)
DHL Pole Position (1m22.846s)
“It was a great qualifying and I’m really, really happy for the team, for myself also after a terrible weekend in Ningbo. But I never really doubted and to be here in pole position means a lot. We had a long, long look after Ningbo to make sure we could move back to the front and that’s what we did. I’m really happy for WRT, Leopard, Lukoil and Audi of course. It was a good lap and I’m really happy. I’m going to focus now on my start and taking the lead at the first corner. Then I will find it a bit easier.”

Pepe Oriola (Team OSCARO by Campos Racing, Cupra TCR) P2 (1m22.890s)
“I am pleased, we had the pace for Qualifying but we didn’t put the laps together until the last round. In the last lap, in the last corner, I pushed a bit more to gain the tenth I missed but I didn’t want to risk so P2 is really good because three minutes ago I was P11 so I’m really happy. We found a good set-up for the race.”

Nathanaël Berthon (Comtoyou Racing, Audi RS 3 LMS) P3 (1m22.909s)
“This is my best qualifying so far so I’m very happy and hopefully now I can make a good start. I’m very happy for the team, for Audi as well because we are all in the front basically. It has been a long time because all year we have been struggling, we did a good job and I’m very happy. The improvement is a bit of everything. Yesterday nobody knows the track, me as well. Usually I am quickly on the pace when it is like this and that’s what happened today. We were struggling with the fist two sets [of tyres] and I was very unlucky with my second set on the red flag and the first one I had traffic in the first corner. Basically it was only one lap so I am lucky in this lap. I missed the pole for nothing and hopefully tomorrow we can fight for it.”