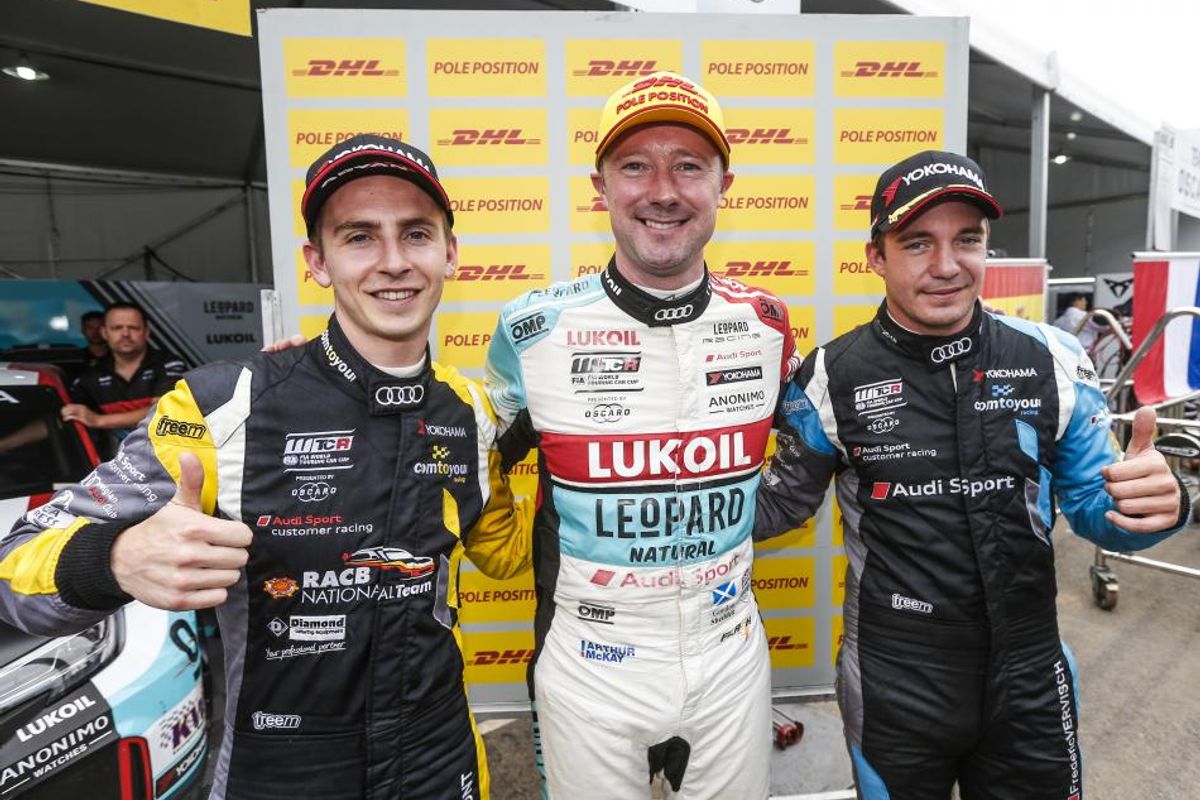 The Scot jumped to the top of the times at the end of Q2 in his Audi Sport Leopard Lukoil Team Audi RS 3 LMS and carried that form into the one-shot Q3 session to beat Audi Sport Team Comtoyou’s Frédéric Vervisch to the DHL pole.

“Absolutely fantastic!” said a delighted Shedden, who scored his first WTCR OSCARO podium finish in Race 1 on Saturday. “After the podium yesterday I had to keep up that momentum. The Q2 lap was ridiculous! And I haven’t done many Q3 shoot-outs this year… so I needed a solid lap. Now I need to lead from the start and win the race!”

Shedden’s team-mate, Race 1 winner Jean-Karl Vernay, set the pace in the 30-minute Q1 session, ahead of the impressive Ma Qing Hua from China and Aurélien Panis. The dash to make the top 12, ensuring progression through to Q2, left a number of major names disappointed as tiny margins separated the whole field.

Those to miss out included Rob Huff’s Golf in P13 and the Hyundai i30 N TCRs of YMR duo Thed Björk and Yvan Muller (P14 and P15 respectively) and WTCR OSCARO points leader Gabriele Tarquini in P16. Double DTM champion Timo Scheider was in P18, Yann Ehrlacher – fourth on the road in Race 1 before being penalised for a jumped start – only P21 and Nobert Michelisz down in P22 as the Hungarian’s difficult weekend continued.

Shedden got the better of team-mate Vernay in Q2 to top the times, as the Audi Sport Leopard Lukoil Team duo were joined by Comtoyou drivers Vervisch and Denis Dupont, with Esteban Guerrieri’s ALL-INKL.COM Münnich Motorsport Honda Civic Type R TCR rounding out the top five.

Comtoyou’s Nathanaël Berthon just missed out on a Q3 place by 0.044s in sixth, while Oriola once again gave everything to make the cut – this time overstepping the mark and hitting the wall on his final lap. “It’s really close and you have to give every single metre – and I did that on the final lap,” he said.

For the second week in succession, Bennani claimed the reverse-grid Race 2 DHL Pole Position by ending up P10 in the session. He is set to be joined on the front row by Chinese crowd favourite Ma Qing Hua, who was ninth in his Boutsen Ginion Racing Honda.

Aurélien Comte was eighth quickest in Q2 and is due to line up on the second row in his DG Sport Compétition PEUGEOT 308TCR beside Oriola.

Comtoyou’s Panis qualified in P11, with Ceccon the last of the 12 – just 0.835s from Shedden’s benchmark.

Guerrieri kicked off the Q3 one-at-a-time shootout, setting a target time of 1m23.744s. Belgian Dupont was next in his Comtoyou Audi and was comfortably faster – by 0.785s.

Team-mate and countryman Vervisch then lowered the mark further to go quickest by 0.134s, with just the Audi Sport Leopard Lukoil Team duo left to run.

Vernay was first up as the Frenchman made a bid for his second DHL Pole Position of the weekend. But the Audi crossed the line 0.197s down on Vervisch and with a time also slower than Dupont’s.

Now it was Shedden’s turn – and the Scot pulled out a great lap to snatch the DHL Pole from Vervisch by a scant 0.049s. It means he and Vervisch are due to share the front row for Race 3, ahead of Dupont and Vernay.