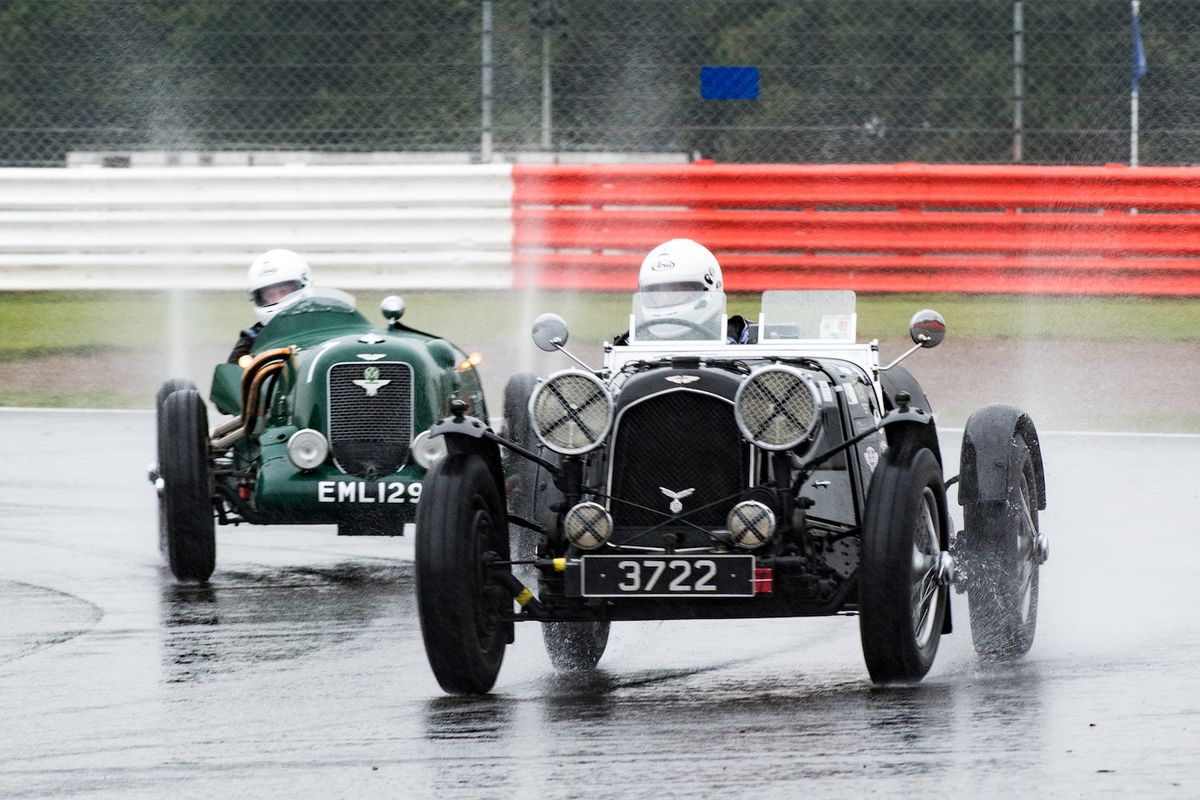 The final AMOC Racing meeting of 2018 saw competitors taking on the challenge of a rain-lashed Silverstone on Saturday, October 6th, the meeting finishing with the deciding race of the 40th anniversary of the AMOC Intermarque Championship. BMW claiming the team title with Laurence Squires crowned as the Intermarque Driver Champion after a season-long battle with Rob Hollyman and Gavin Dunn.

It was a wet race for the GT Challenge where Graham Tilley was on pole in his Ginetta, his sights set on becoming the first double-winner of the season, but it wasn’t to be as alongside him on the front row was the similar G55 of Nick and Tom Cresswell.

The Ginettas eased away from the field in the early stages of the 50-minute race, the Porsche of Mark Smith and Dominic Malone running third before the BMW of Arran Moulton-Smith went past on lap 11. Tilley was pushing hard as he knew he needed a gap, both Ginettas carrying pitstop time penalties due to their pace.

As the pit stop reshuffle settled Tom Cresswell came out as the leader, with Tilley in second and this is how they finished with a Ginetta one, two. James Moulton-Smith brought the BMW M3 started by Arran home third, and the only other car on the lead lap.

“It was horrible out there, though not as horrible as this morning,” said Nick Cresswell. “It’s only our second race in this car and we have never driven it in the wet before, so we are thrilled with the result.”

“The track was still dodgy in places, but that was good fun,” said Tom Cresswell.

Robin Marriott was the first of the class one Aston Martin runners home in seventh, a lap clear of the similar GT4 of David and Robert Tinn.

The Farallac Mk2 of Tony Bianchi was on pole for the Jack Fairman Cup race for 1950s sportscars, but in the tricky conditions it was the MGA of Mark Ellis that took the lead at the start, these two pulling clear of Robi Bernberg’s Cooper Bobtail in third. A safety car period from lap seven after conditions caught out Zaheer Shah in front of the pits closed the field back up, and racing resumed again after 11 laps.

This time it was Bianchi who was up to pace first, taking the lead and heading Ellis at the end of the first lap of renewed racing. Despite the big power disadvantage to the V8 Farallac, Ellis stayed with Bianchi and used the nimble handling of the MG to get inside the leader on the exit of Luffield more than once, each time just losing out in the drag race onto the pit straight.

Bianchi opened a gap in the final laps to take the win, the lead pair well clear of the rest, Neil Cawthorn making it two MGs on the podium by passing Bernberg near the end.

“It is not easy to try to put 400BHP down onto the track in these conditions,” said Bianchi. “The race was good fun though, Mark Ellis was getting alongside me and I was working hard to keep him behind.”

Conditions had eased slightly for the Pre-War Team Challenge where six Aston Martins were also competing for the St John Horsfall Memorial Trophy.

The first four cars away after the calculations of handicapper Martin Dewey were the Wolseley Hornets of Anthony Seber and Ron Turner, the latter with two laps in hand, the Railton of Anthony Fenwick-Wilson and the Aston Martin 15/98 of Donington winner Peter Dubsky.

Turner held the lead until lap eight, when the Hornet of John Seber went past, only in turn to be dethroned at the head of the field a lap later by the Aston Martin Ulster of John Briggs. The battle at the front had Briggs and Duncan Wiltshire’s Bentley dicing in a duel that would have graced any of the day’s races, while on the move was the Hornet Special of Anthony Seber, who had been seventh on lap eight but was moving up quickly, into third two laps later and in the lead by lap 11.

Anthony Seber took the win, Clive Morley coming through late in his Bentley to take second, while in third, the Invicta of Trevor Swete headed Briggs and Wiltshire over the line, the trio covered by less than a second. Fittingly, Aston Martin won the Team Challenge competition, John Briggs took home the St John Horsfall Memorial Trophy.

The final race of the day saw the climax of the 40th anniversary of the 2018 AMOC Intermarque Championship, with the team prize to be confirmed and the drivers’ title still tightly contested. Title challenger and Porsche team captain Rob Hollyman led at the end of lap one, but polesitter Chris Bialan had his BMW M3 back in front the next lap, Hollyman chasing hard, the pair lapping the rest of the field by lap ten on the drying track.

The leader stayed out until lap 23, rejoining just over 30-seconds clear of Hollyman, Clark then taking third having passed Weaver.

In the final laps Bialan eased off and Hollyman reduced the deficit, but was still 20-seconds down as they took the flag after the 45-minutes of racing. Andy Peck stayed clear of Karl Weaver to take third, Adrian Clark fifth ahead of the BMW 323i of Laurence Squires.

“That was good, the driving standards were superb as we were lapping people,” said Bialan. “There was a dry line starting to appear and I was conscious of the tyres, and managing them in the later laps, then increased the pace at the end as he was getting closer than I liked.”

The result saw BMW end Porsche’s domination of the team championship, while that sixth place finish was enough to see Squires just head Hollyman at the top of the drivers’ points after a strong season of racing.

“We managed to keep the car on the black stuff and keep going, and we got the result in the end,” said a delighted Squires. “I almost felt the pressure was off after the previous meeting as we had slipped to second in the points, there were some strong cars in front but the rain was a leveler and it was all about getting to the finish line.”

The guesting Equipe Pre’63 series started the day’s racing, poleman Tim Mogridge slipping to fifth on the opening lap in his Jaguar E-Type. Andrew Hibberd leading in the Project 214 Aston Martin. Mogridge was on a recovery drive and back into second by lap eight, having passed the MGA of Tom Smith, the latter the first of the lead trio to pit on at the end of lap 12.

Mogridge made his compulsory stop on lap 15, and when Hibberd finally pitted to hand over to Martin Brewer, the Jaguar was the only other car on the lead lap. Mogridge kept pushing and started to reel in Brewer, moving ahead to ultimately take a comfortable win.

The Equipe GTS race was over 40-minutes with a compulsory pitstop and saw a healthy field of classic sportscars take on the wet Silverstone circuit. Nick Matthews had the measure of the conditions early in the race, opening a gap in his Austin-Healey 100/4 over the rest who were headed by Tom Grindall’s MG before the Elva Courier of Rob Cobden went past on lap 14, pitting a lap later.

Matthews had already made his stop, and by the time the leaders had all cycled through the pits, was back ahead on lap 20 and took the win well clear of Grindall. The Triumph TR4 of Nick Mountford was third, Henry Rice next up, first of a swathe of MGBs. (ITA)