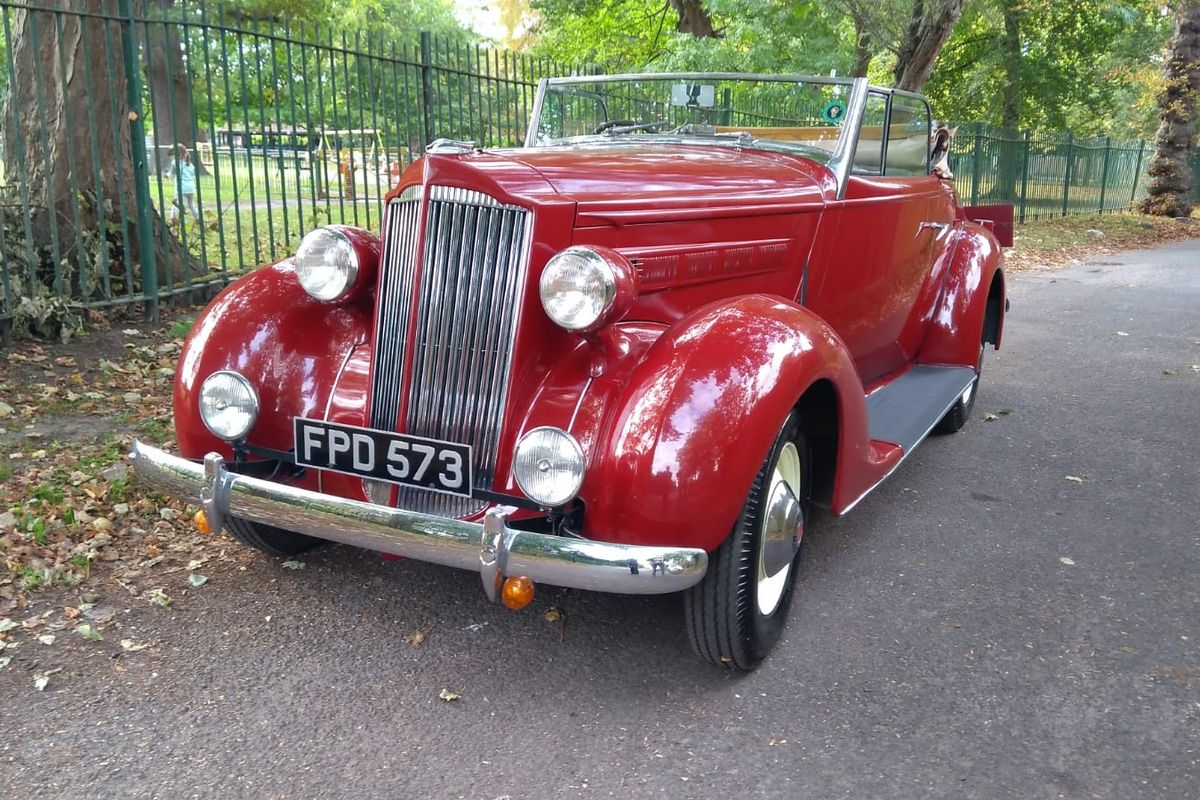 A Packard 115C Convertible Coupe is to be sold by the international car auctioneers COYS just two miles from where it was first built in 1937. This very rare right-hand drive Packard was discovered in a garage by the vendor’s father in 1979 and will go under the hammer at Syon Park this Saturday, 13th October. The Packard underwent seven years of restoration after which it was seen regularly at events such as the Biggin Hill International Air Fair and the Bromley Pageant of Motoring. Estimate £22,000- £27,000.

Amongst the broad selection of historic and classic vehicles coming to auction, is an exceptional 1959 Leyland AEC Routemaster Double Deck Bus by Park Royal. It has been well kept since its 1984 withdrawal from service and is in very original condition, having escaped London Transport’s modernisation programme in the 1990’s. The paintwork is excellent, with a very straight body, excellent original interior, and a clean chassis and the batteries are relatively new. Estimate £50,000- £60,000.

A 2001 Ferrari 550 Barchetta Pininfarina which is also up for auction was designed to recall the glories of successful road racers of the past, such as the 166 MM, and thoroughbred front-engined 12-cylinder Ferrari roadsters of the calibre of the 250 GT California and 365 GTS/4 Daytona. The car is finished in Blu Tour de France with a Crema leather interior and has a fabulous low mileage example; it has covered a mere 558 miles from new, and is presented in simply fabulous condition. Estimate £290,000- £330,000.

Also, going under the hammer is a 1971 Rolls Royce Corniche Convertible which was first delivered to the late Sir Bruce Forsyth in July 1971 and was owned by him for seven years. It has a wonderful Ming Blue coachwork and sumptuous blue interior. It is very well maintained car and has an extensive history file. Estimate £60,000- £70,000.

A 1992 Lamborghini Diablo is also on offer. This car was first registered to former Formula 1 constructor Walter Wolf racing, subsequently finding its way to the United States, and now being offered from a UK-based Lamborghini collection. It is finished in Yellow with a black leather interior. In 2018 the car was the star in the Lisa Riley show Sooty and Sweep, which was subsequently featured in the Lamborghini Club magazine Rivista Veloce. Estimate £100,000- £120,000.

The 1973 ISO Fidia is a wonderful proposition for a collector. The car has been modified in recent years with alloy cylinder heads, upgraded Ford ‘Automatic Over Drive’ (AOD) gearbox and has been finished in the classic (and original) combination of mid-blue metallic with a Champagne leather interior, the Fidia exudes a level of plushness that only the very best luxury GT cars of the 70s are able to achieve. It is offered with a current UK V5 registration document and MoT test certificate. The estimate is £50,000- £60,000.

Some of the other notable cars that are going under the hammer are: