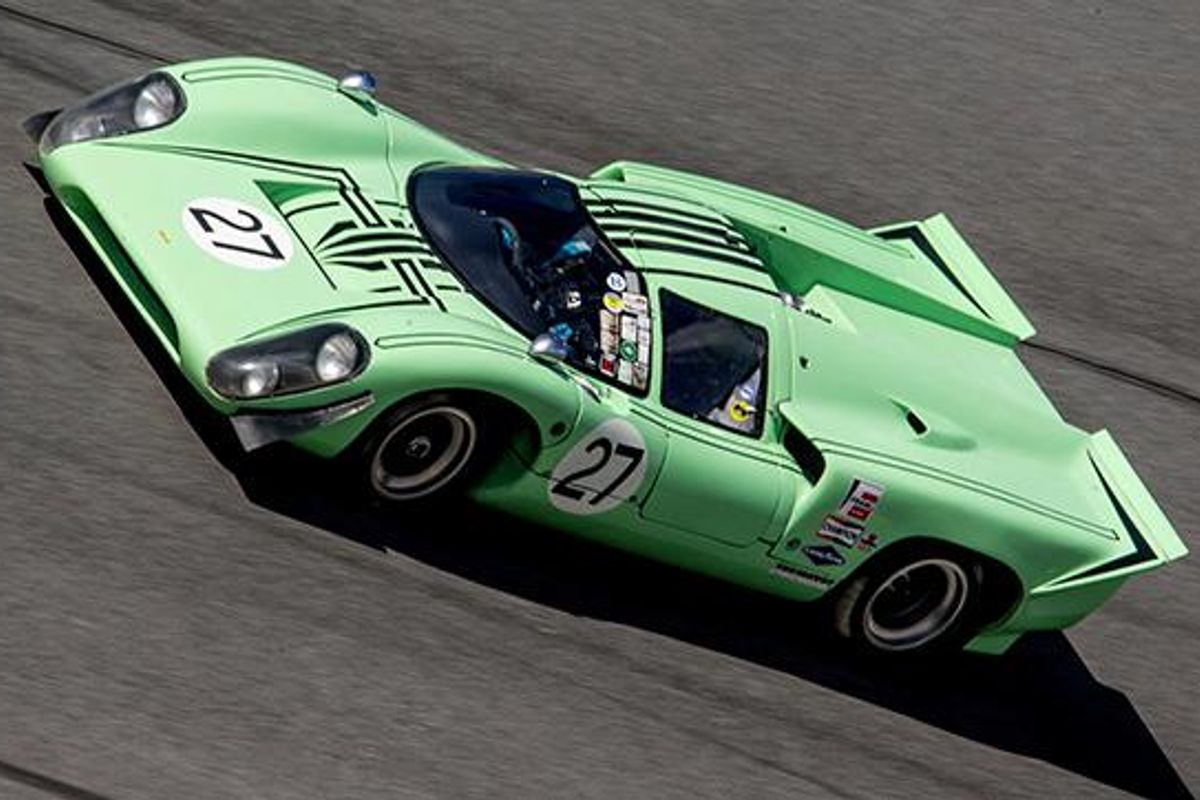 With the 2018 Historic Sportscar Racing (HSR) Classic Daytona presented by IMSA just a month away, entered teams and drivers have shifted their focus to testing and pre-race preparation for the fourth running of the Classic 24-Hour race at Daytona International Speedway (DIS), November 7 - 11.

Several teams entered in next month's HSR Classic Daytona tested on the 3.56-mile DIS road course last week, and one standout entry set for the Classic 24-Hour race is an original Lola T70 with a lengthy and notable history. Prepared by Heritage Motorsports for co-owner and co-driver brothers Dean DeSantis and Damon DeSantis, this 1969 No. 27 Lola T70 Mk3B raced and won on race circuits around the world and nearly found its way into the spotlights of Hollywood.

"The Lola is a racer's dream," Dean DeSantis said. "My brother and I started racing with 2-liter BMWs and eventually moved up at the same time to 3-liter Porsche 911s. They are fun but driving the Lola is a totally different experience. You are running close to 700 horsepower over an aluminum frame and a wee bit of fiberglass. It's an awesome feeling having that kind of power, and the car is designed to race. It handles great and you really learn to respect the power and the capability of a car like this. When you hit the throttle, this baby wants to go!!"

In its prime in 1969 and 1970, the Lola was driven to a Gold Cup race victory at Oulton Park and second at the Kodak trophy at Thruxton in England in addition to success in South Africa in the Springbok Series with a first-place finish in the Cape Town 3 Hour and second in the 9 Hours of Kyalami. Co-driven by motorcycle World Champion Mike Hailwood, the Lola also ran in the 1970 12 Hours of Sebring in 1970 but did not finish after a mishap with another car.

The Lola almost made into the now legendary Steve McQueen movie Le Mans but was never given the chance to shine in the Hollywood spotlight.

"The car was sent to Le Mans for the Steve McQueen movie but sat in storage as it was not used for filming," Dean DeSantis said. "There is rumor that it was forgotten about for a while, but it eventually made its way to the United States. Damon and I are proud to carry on the tradition of this fine racer and are committed to continuing to race it at special events around the world. This car deserves to be on the track and we hope to give her as many opportunities as possible."

The next special-event opportunity is the HSR Classic Daytona, a race that has quickly achieved "must-do" status with historic and vintage racing competitors around the globe.

"Just to participate in a car like this in the Classic Daytona is a dream come true," Dean DeSantis said. "There is a feeling like nothing else in this world as you go high on the banking between NASCAR Turns 1 and 2 at 6:30 in the morning, when the sun is just peaking over the top of the wall and you are all alone doing 180 mph. Just you and a piece of 50-year-old history doing what they did back in 1969. It's one hell of a feeling!"

To learn the ropes and high-speed peculiarities of the nearly 50-year-old Lola, the DeSantis brothers have enlisted the services of former Rolex 24 At Daytona overall and class-winning driver Jim Pace, a longtime driver coach with Heritage Motorsports.

"As we spend more time in the seat, we'll attempt to figure out all of her nuances and get faster laps as time goes on," Dean DeSantis said. "Jim Pace has helped with instruction for both of us, and he is to be commended for his ability and his patience. He's a driving machine, so why not learn from the best!"

The Lola tested last week at Daytona alongside some equally notable race cars that are also entered for the HSR Classic Daytona.

The 2011 No. 54 Roin Realty Holdings Oreca FLM09, entered in the HSR Classic Daytona for Dominick Incantalupo and Sean Rayhall, also participated in the recent Daytona test, as did Chris Mealey in his 2014 No. 93 Dodge Viper GT3-R prepared by Riley Motorsports.

Debuting in 2014, the HSR Classic Daytona presented by IMSA once again features this year period-specific groups of historic and vintage sports cars competing twice-around-the-clock on Daytona International Speedway's  road course. The event weekend is set to take place this November 7 - 11 with practice, qualifying and Daytona Historics HSR WeatherTech Sprint and B.R.M. Enduro Challenge races preceding the Classic Daytona, which is scheduled to start at 1 p.m. ET on Saturday, November 10.

Spectator tickets for both the HSR Daytona Classic Presented by IMSA and HSR Sebring Classic 12 Hour are now on sale exclusively through online purchase at http://www.hsrtickets.com/.

A variety of tickets are available for the HSR Daytona Classic, including single-day Thursday and Friday admission and two, three and four-day ticket options. Camping accommodations are available for everything from a four-day tent pass for $30 on up to Premium RV Parking.

Current ticket purchases will be shipped with all orders after October 22, 2018 held in Will Call and available for pick up in the HSR Registration office inside Daytona International Speedway Gate 40 starting November 8, 2018. Online ticket sales will end on October 28, 2018 with on-site purchases at HSR Registration at Gate 40 beginning November 8, 2018. Learn more at http://www.hsrtickets.com/.

Next up for HSR on the 2018 schedule of events is the Savannah Speed Classic at the Grand Prize Circuit on Hutchinson Island in Savannah, Georgia, October 25 - 28.