Home WEC pole for Toyota in 6 Hours of Fuji 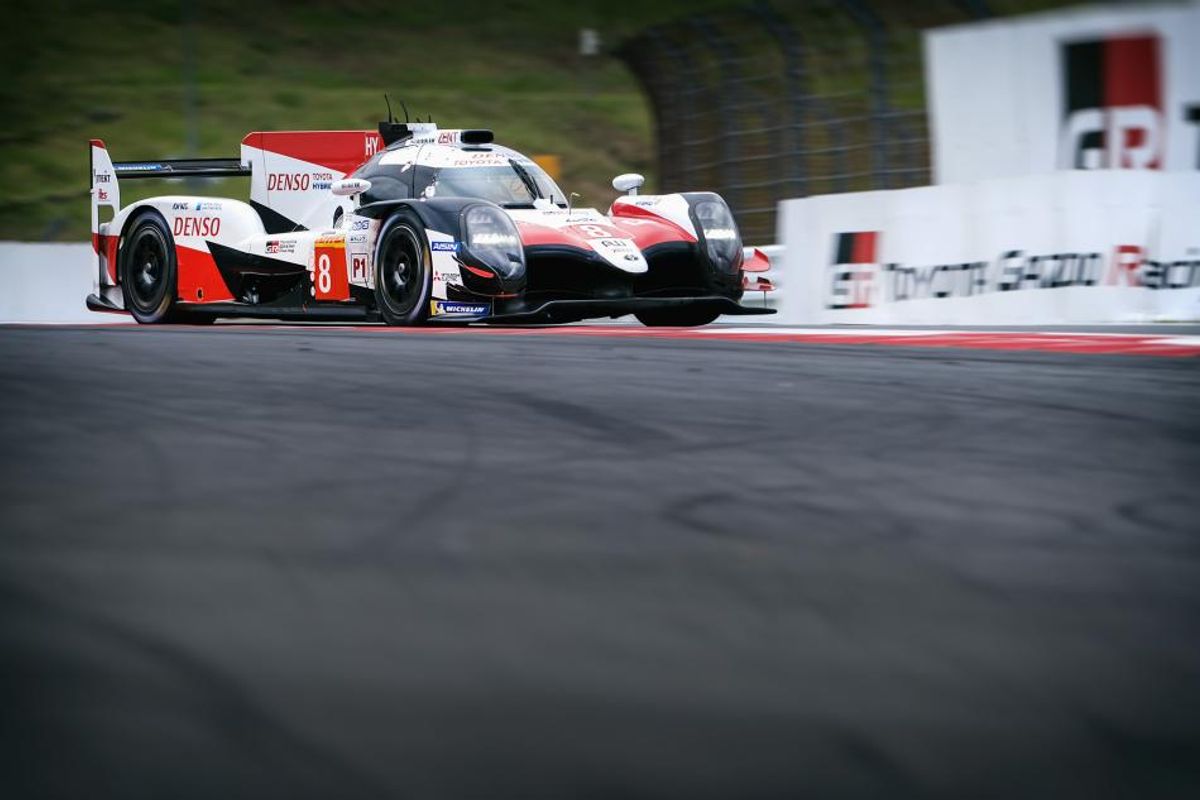 Qualifying for the 6 Hours of Fuji took place under cloudy skies but on a dry track.  Once again it was a Toyota 1-2 at the end of the LMP qualifying period and it was a first pole of the season for the no7 Toyota TS050 Hybrid with Kamui Kobayashi and Jose Maria Lopez getting an average lap of 1m23.557, just 0.091 seconds ahead of the sister car of Fernando Alonso and Sebastien Buemi.

However Lopez was judged to have broken the pitlane speed limit during the session and he was excluded from qualifying (Stewards Decision no8).  This promoted the no8 Toyota to pole position, making it four out of four for the championship leaders.

The no7 Toyota Gazoo Racing TS050 Hybrid will start the 6 Hours of Fuji from the back of the grid.

The no1 Rebellion Racing R13-Gibson was the fastest of the non hybrid competitors after Neel Jani put in a last minute fast lap to move ahead of the sister car of Gustavo Menezes and Thomas Laurent.

The no95 Aston Martin Racing Vantage of Marco Sorensen and Nicki Thiim took the first LMGTE Pro pole for the new for 2018 car.  The Danes posted an average lap of 1m36.093 of the 4.5km Fuji Speedway circuit, finishing the session 0.182 seconds ahead of the no82 BMW Team MTEK M8 of Tom Blomqvist and Antonio Felix Da Costa.

All of the ten competitors were covered by just 1 second at the end of the twenty minute qualifying period with the no97 Aston Martin qualifying in third, just ahead of the no67 Ford GT of Andy Priaulx and Harry Tincknell.  Championship leaders Michael Christensen and Kevin Estre qualified 10th.

Anthony Davidson and Roberto Gonzalez in the no31 Dragonspeed Oreca-Gibson scored the first WEC pole for the American team.  The Anglo-Mexican duo posted a 1m28.906 lap, three tenths ahead of two Jackie Chan DC Racing Orecas, with the no37 Oreca less than one tenth ahead of the no38 car.

LMP2 Championship leaders Signatech Alpine were fourth fastest, with Andre Negrao and Pierre Thiriet finishing the session on a 1m29.432, just 0.5 seconds behind the lead car for tomorrow’s race.

Japanese driver Satoshi Hoshino helped claim the class pole for the no88 Dempsey-Proton Racing Porsche alongside his Italian teammate Matteo Cairoli.  The pair posted a 1m38.336 average lap time to push the no98 Aston Martin Racing Vantage of Pedro Lamy and Paul Dalla Lana off the top spot by sixty four hundredths of a second.

The no77 Dempsey-Proton Racing Porsche will start third, the current championship leaders Matt Campbell and Christian Ried just 0.188 behind their teammates.