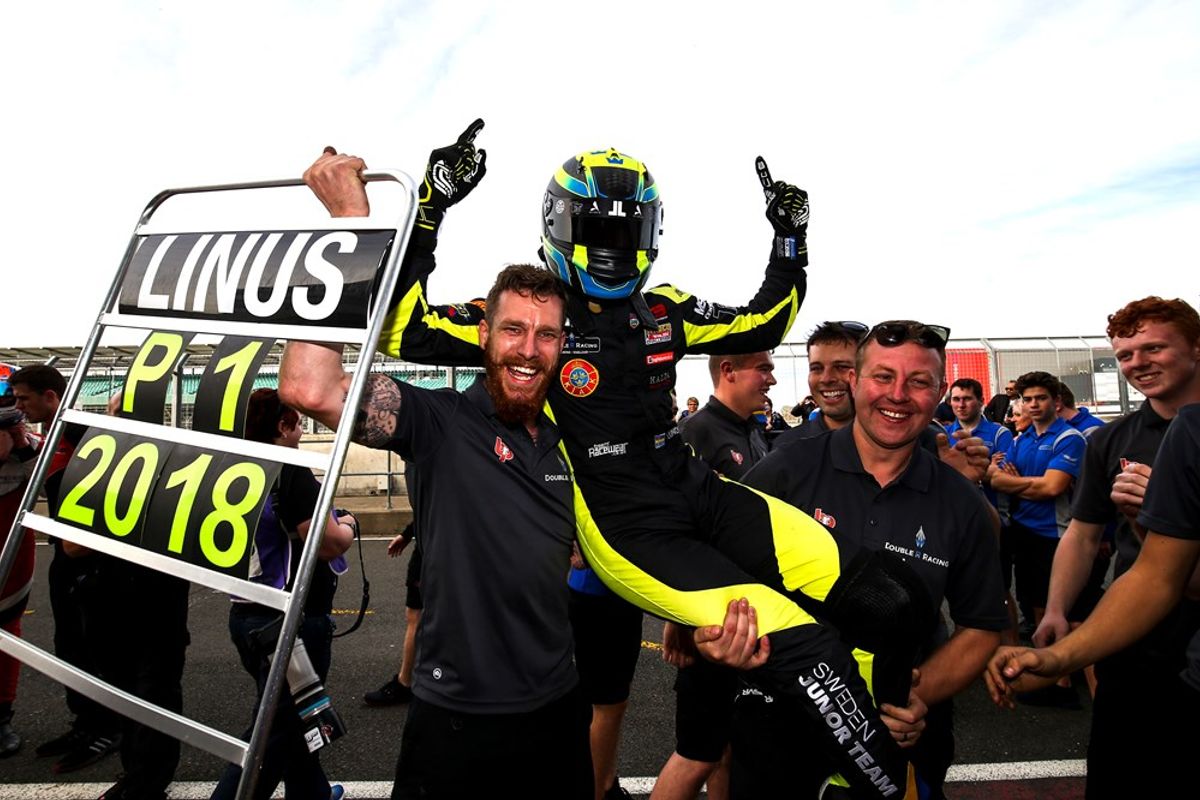 Double R Racing’s Linus Lundqvist is the 2018 BRDC British F3 Champion, after storming to his seventh victory of the season at Silverstone this afternoon (Saturday).

With his title rival Nicolai Kjaergaard retiring on the first lap, Lundqvist needed only to finish on the podium, but converted pole into one of the most dominant wins of the year by over three seconds, and also set fastest lap, potentially putting him in an ideal position for race three tomorrow afternoon.

Fortec Motorsport’s Tom Gamble claimed second after challenging Lundqvist on the first lap, while Billy Monger took third having dropped to fourth on the first lap, before moving back into the podium positions on lap two.

Manuel Maldonado claimed fourth, and hassled Monger throughout the latter stages of the race, with Ayrton Simmons putting in a strong performance for Chris Dittmann Racing to take fifth. Krishnaraaj Mahadik was sixth, a quarter of a second clear of Hillspeed's Jusuf Owega, while Hampus Ericsson took eighth, holding off a queue of cars for the duration of the race, with Jamie Chadwick and Sasakorn Chaimongkol completing the top-10.

At the start, Lundqvist made a good get away to lead to Copse corner, while behind him, Tom Gamble jumped Billy Monger off the line to take second on the run down to Copse, with Monger slotting into third. Gamble challenged Lundqvist on the run down to the Becketts complex, but the Swede was able to hold him off and retain the lead. Heading into the final third of the lap, the title battle swung massively in Lundqvist's favour, with Kjaergaard leaving the track at the fast Farm left hander, and failing to rejoin.

That development meant that Lundqvist only needed to finish on the podium to take the crown, but instead he proceeded to pull away from Gamble at a rate of knots. He held a lead of 1.3 seconds at the end of lap one, and was two seconds clear at the end of lap two. As Lundqvist continued to set a string of fastest laps, the lead was up to 3.4 seconds at the end of lap six, before stabilising the gap to take his seventh, and ultimately decisive win of the year, claiming the crown with two races to spare. Lundqvist holds an 85 point lead with just 72 now available this weekend.

Behind him, Gamble took a clear second, establishing a gap of over three seconds to Monger in third to reignite his chances of taking a top-three finish in the championship, while Monger took his fourth podium of the year. The Carlin driver was made to fight for it though, as he fell from second on the grid to fourth on the first lap behind Maldonado. Monger forced his way past on lap two, but from there onwards it was a scrap between the pair for the final podium spot, with Monger eventually taking it by just over half a second.

Maldonado's fourth place saw him gain two places on his starting position, while Simmons in fifth had a clear race for Chris Dittmann Racing having started seventh on the grid, and continuing his strong adaptation to the BRDC British F3 car.

Double R's Mahadik was another to gain two places from his starting position to take sixth, and the Indian driver now faces a fight for third in the championship, being three points behind Kush Maini, who finished 11th in the race, and eight points clear of Gamble.

Owega in seventh was just 0.236s behind Mahadik at the flag, having climbed from 12th on the grid, while Ericsson had race long pressure from a train of cars, with Chadwick, Chaimongkol, Maini, and Sun Yue Yang following him closely throughout.

None of that mattered to Lundqvist though, who now joins names including Jackie Stewart, Ayrton Senna, Mika Hakkinen and Daniel Ricciardo as a British F3 Champion, and delivering Double R's second BRDC British F3 title in three years.

The top three drivers were presented with their trophies on the podium by BRDC Member and well-known commentator Ian Titchmarsh. The final two races of the season take place at 09.20 and 14.25 tomorrow.