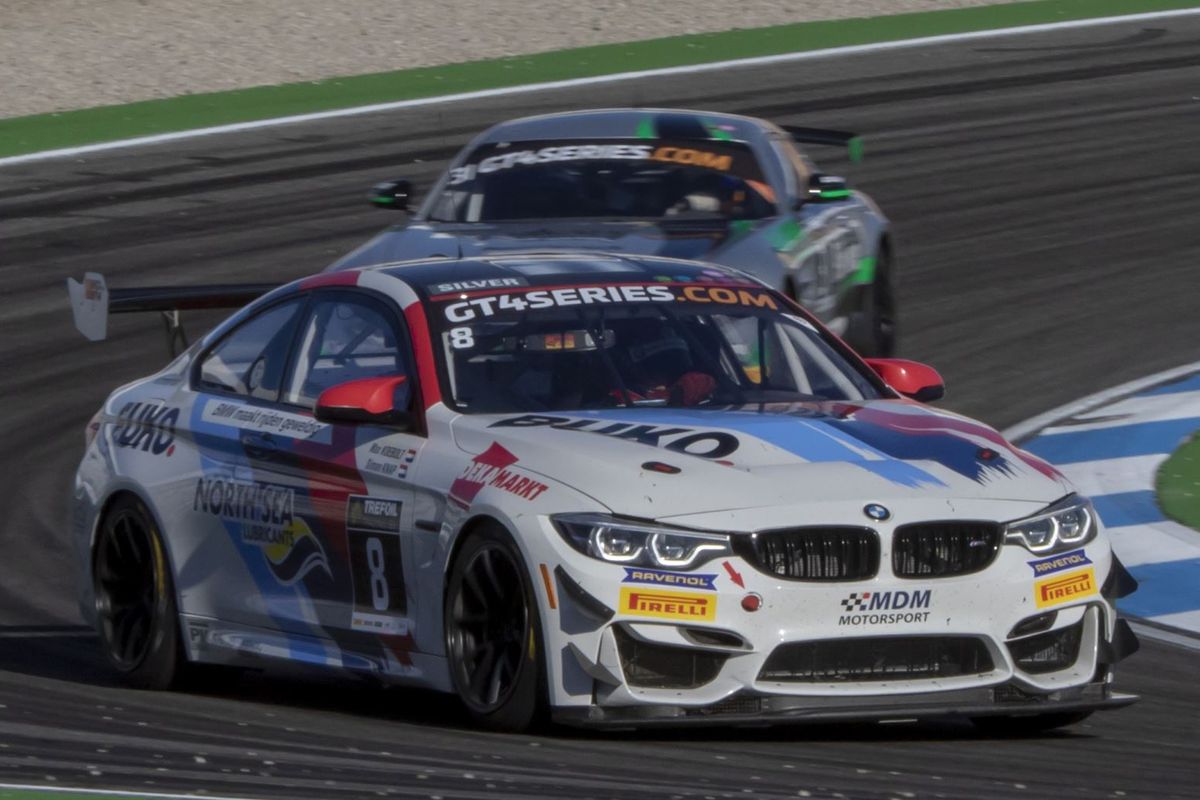 At the 4.574 kilometres long Hockenheimring, Max Koebolt scored his first race win of the GT4 Sprint Cup Europe weekend. In bright sunshine, the Dutchman held off a late-race charge by Belgium’s Gilles Magnus to win the first of two 40-minute races in his #8 MDM Motorsport BMW M4 GT4. Magnus finished in second position, ahead of Gabriele Piana.

The race was restarted at the end of the fourth lap and it was Schöll who pulled away, only to suffer a mechanical issue coming out of turn 7 on the first lap after the restart. This handed the lead to the #112 Team Macrix Software by RN Vision STS BMW M4 GT4 of Gabriele Piana, with Max Koebolt, Gilles Magnus and Hendrik Still right behind him.

Two laps later Koebolt passed Piana at the Spitzkehre with a daring move and as soon as he had passed the Italian the MDM Motorsport driver pulled a gap. Selleslagh Racing Team’s Magnus immediately started his attack on Piana and one lap after Piana had lost the lead Magnus passed him to take second place.

Koebolt managed to keep the gap between his BMW and Magnus’ Mercedes at just over one second for several laps, but by lap 15 and with ten minutes left in the race Magnus began to close in again. Magnus managed to bring the gap down to only a couple of tenths but was unable to pass Koebolt.

After 21 laps it was Koebolt who crossed the line to take the win, with Magnus finishing 0.573 seconds behind the MDM Motorsport BMW M4 GT4. Gabriele Piana took third place, ahead of Allied Racing’s Hendrik Still.

An intense battle for fifth was won by Razvan Umbrarescu, who beat Bas Schouten by just 0.098 seconds. Henri Kauppi came home in seventh place. Tim Heinemann was the eighth driver to finish the race but wasn’t classified as he had lost too many laps after his first lap incident.

Max Koebolt, #8 MDM Motorsport BMW M4 GT4: “I was able to pass Piana, albeit with a rather risky move. After that move I was able to pull a gap and I could drive at a pace that didn’t hurt the tyres too much. At a moment Magnus began to close in on me and that’s when I started to push. In the end he came closer as my rear tyres began to wear down and that resulted in a fight until the final corner. This was a great race and I really needed this win after the disappointing finish of the European season.”

Gilles Magnus, #31 Selleslagh Racing Team Mercedes-AMG GT4: “I didn’t have a great start and several BMWs passed me, as they have more power. I was down to fifth but gained some place as a result of some incidents in front of me. I then had to pass them one-by-one. In the end I had a good pace as I had saved my tyres early on. I was able to close the gap to the BMW but passing him was impossible as he had more power in second and third gear.”

Gabriele Piana, #112 Team Macrix Software by RN Vision STS BMW M4 GT4: “I did the maximum I could do, but we don’t have the package at the moment. There are some issues we are investigating. The guys will try to fix it for tomorrow. I drove completely on the limit from the first lap to the last lap. I defended when I could, when I saw that it was pointless I just let the guys go. There was no point in having an accident, as I could still finish on the podium. I fought hard with Hendrik in the end. Despite not having many cars, the competition was very good, and I liked it!”

Mark Bus, team manager MDM Motorsport: “I’m really happy with this victory. After the disappointment of not winning the GT4 European Series title, this victory at Hockenheim is a real boost at the end of the year.”